Turkeys and Pigs and Deer, OH MY!

I have to apologize.

Between dealing with hurricane Sandy living here on the beach and also trying to recover from a horrible cold and sinus infection, I have been lax on posting anything to my blog these last few weeks. Fortunately, we were not hit to badly by the hurricane AND I have recovered from my recent illness and I am ready to prattle on aimlessly once again!

I cannot believe that it is almost the middle of November already! My wife is busy making plans for Thanksgiving and all of the sudden, I am staring at naked trees outside our windows. Fortunately, it’s so windy in our area most of the time, I am rarely faced with the daunting task of raking leaves.

As a child growing up in Duquesne, it was always a sure sign of the arrival of my favorite

time of the year when I would look out of our dining room window and see a blanket of leaves covering our back yard. The sycamore in the yard had grown to such an immense size, that by the time I was in my teens, it towered over our two storied home. During the summer months, it provided a think umbrella of shade for the back yard and for the back half of the house. After turning a brilliant orange and yellow by October, an avalanche of leaves continued to bombard our yard until every last leaf had released its grip on even the smallest twig.

My dad was very diligent about keeping up with the leaves. Together, my brother, Dad and I would pack bag after bag of leaves. Of course, an obligatory swam dive or two into the largest piles of leaves would have to be landed by me and Steve before they were packed away into a bag. I can still remember that wonderful smell of the slightly damp and musty leaves that was part of the aroma of the season. 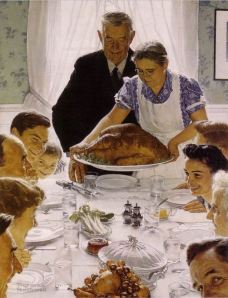 By the time that our seasonal raking chores were completed and the last leaf had been gathered, we were only days away from Thanksgiving. Heading into the first event in a season of holidays, Mom would be planning her part in the Volk Family’s Thanksgiving Day dinner at my grandparents. The menu was traditional American Thanksgiving Day cuisine and was rarely deviated from; turkey, bread stuffing, mashed potatoes, gravy, canned corn, green beans, dinner rolls, and of course, pumpkin pie. I believe that this was perhaps the only family gathering where any vestige of hunky food was absent! There wasn’t a cabbage roll, pot of soup or poppy seed roll around!

I never really never gave the absence of good ol’ hunky food a second thought until recently. I always presumed that Thanksgiving was purely an American tradition. The story of the Pilgrims sharing their bounty with the Native Americans never mentioned “hunky hand grenades” or haluski as part of the menu. However, on a lark, I decided to do a bit of research into Slovakian traditions and found that there was an event that somewhat paralleled our Thanksgiving feast, “Zabíjačka,” pronounced za-bil’-yach-ka.

Although the literal English translation is “shambles,” its implied meaning is “slaughter.” Sound appetizing already, doesn’t it. After reading a recap of the traditions that are part of the event, I’ve come to the conclusion that this particular tradition was one that my grandparents were happy to leave in the “old country!” If there was any heartwarming  custom that could have been associated with this event, I was at a bit of a loss to find any after reading the recap below. Let me know what you think and if anyone recalls their parents following or talking about this tradition:

One of the annual (or semi-annual) traditions in Slovakia is something called zabíjačka or slaughter. It’s the closest thing we have to the American Thanksgiving. The difference is that instead of killing a turkey, we eat a pig.

The whole ritual starts in late March, when people living in a village buy a pig (prasa). The small 30lb piglet is then fattened all summer long, and finally slaughtered once it gets to a respectable 200lbs. Of course, nowadays many folks do not have the yard (nor the patience) to raise a pig. As such, it is quite common to purchase an already pre-fattened pig. And if the family is small, to purchase just a half or a quarter of the porker.

Unlike with the case of Thanksgiving, there is no set “slaughter” date. However, there are two main slaughter seasons: in November (about a month before Christmas) and then again before Easter. On the day of slaughter (or the delivery of the pig), the whole family, friends and neighbors get together. The dead pig is placed on a wooden board, and a heat lamp is used to burn off all the hair. Then hot water is poured all over the pig to wash it. Finally, the head is chopped off and the belly is cut open.

The internal organs are then removed, including the intestines (črevá). Typically one woman would wash the intestines while another went about preparing lunch. The intestines have to be washed thoroughly, since they are to be used later as casings for sausages and hurky. They are rinsed off some 20 times, and then left to soak in water containing dissolved lemon, chopped onions and black pepper. The internal organs are cooked up into a soup (polievka or vývar) that is served for lunch. Small kidney dumplings (pečeňové halušky, dumplings made out of kidney meat mixed with flour) are mixed into it. And for the main course, there is baked meat (pečené mäso).

The real fun started after lunch: making of sausages. Men cut up the meat, grind it up, mix it with the various spices and filled the intestines. Meat from the lunch soup is used to make jaternica (rice sausage) and tlačenka (meaning “pressed meat” but known as head cheese). Other pig parts (including the feet and the tail) are turned into studenina and huspenina, dishes I have no desire to learn the recipe for. Finished sausages are left hanging from a stick overnight and then put in the smokehouse the following morning. Of course, all this involved plenty of drinking and merry good time. Dinner typically consisted of the sauerkraut soup (kapustnica) and more baked meat.

The smokehouse (udiareň) was a little wooden shed with a metal roof. It contained several horizontal sticks from which the meat could be hung. Several cinder blocks or bricks were placed on the bottom, and fire was started between them. A metal sheet with multiple holes punctured in it was placed over the bricks. The purpose of this sheet was to evenly distribute the smoke coming from the fire. Various types of wood were used, but my grandma used the plum (slivka) tree. The fire was kept low to produce a lot of smoke. The sausages were left in the udiareň for about 4 days.

While the sausages were smoking, the other meat was covered with salt and left to marinate in a wooden tub (korýtko). The juices that the meat let out were periodically poured again over the meat. Bacon (slanina) was treated the same way. It was also often seasoned with caraway. Meats were then smoked for some 5 or 6 days, until the bacon got yellow and the meat got golden. Smoked meat (údené mäso) was stored in a dark pantry (komora) where it would keep all winter long. 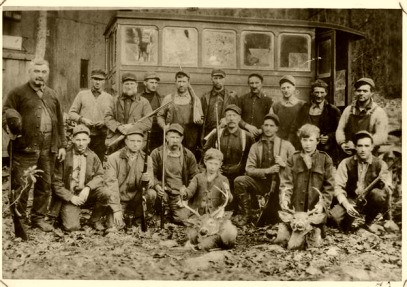 There was one part of OUR Thanksgiving each year that took place without fail. Part of Thanksgiving Day at my grandparents included my father and his brothers and nephews planning their “soon-to-be” transition into the “Great White Hunters” of Western Pennsylvania! Thanksgiving always meant the beginning of deer hunting season. Thousands of testosterone driven hunkys would soon descend upon the forested
areas of Pennsylvania to satisfy their annual primordial quest for “MEAT!”

The majority of my male cousins, my brother and I were never inclined to participate in this particular event. Perhaps we had seen Bambi one too many times or had viewed one too many doe-eyed deer heads on some wall. Whatever the reason, as great as my dad’s hopes were of bagging a 12-pointer each year, my mother, my brother and I remained behind hoping for the opposite result. Having a deer carcass hanging on our back porch awaiting butchering, didn’t conjure up that same warm and toasty feeling one would get from seeing a freshly cut Christmas tree awaiting its move into our living room. But then again, anything beats washing pig intestines!!

This entry was posted in Autumntime, Food and Restaurants, Holidays - Non-Christmas and New Years, Hunky Celebrations, My Hunky Family, Parents. Bookmark the permalink.

10 Responses to Turkeys and Pigs and Deer, OH MY!