Before I begin, I would like to thank you for all of your thoughts and prayers following my posting about the death of my Uncle Lou. Your kind words meant a lot to me and to his family. In the truest hunky fashion, you shared our sorrow and reassured us of his place in heaven. Many thanks for just being you and doing what comes naturally to the people of Duquesne.

Before I begin my next post, I wanted to acknowledge David Belesky of East McKeesport who took the awesome photograph that I am using in the header of this site now. It was taken in 1970 from the East McKeesport vantage point. You can clearly see the Holy Name Church on 2nd Street with a beacon of light shining above it. David, thank you for sharing this with us and for reminding us of the hometown we had. 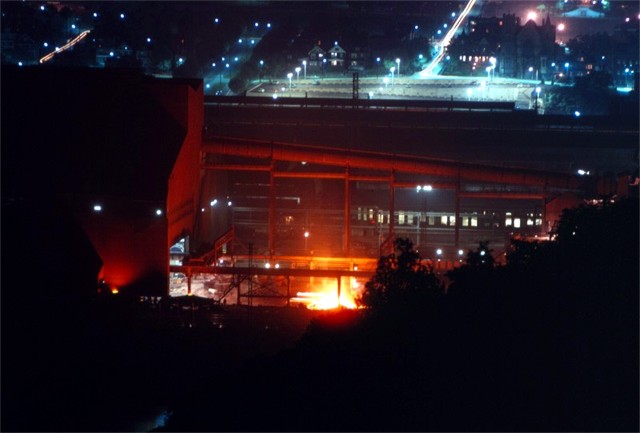 I love reading all of the comments that you send in response to my posts. I’m amazed that 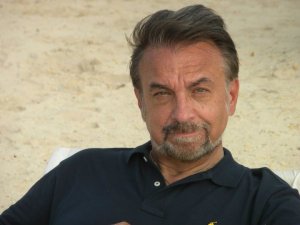 this blog has reached out and found so many current and former Duquesnites! I was inspired by a comment posted by Bob Yuna, formally of Duquesne, that he had  submitted in response to my post about the entertainers who appeared at Kennywood throughout the years. 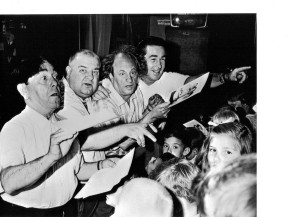 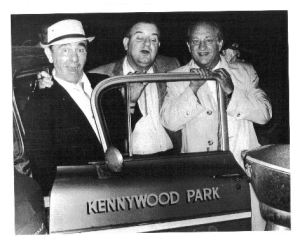 in good health though Curly and Shemp had died years earlier. Joe Besser became the “Third Stooge” in 1956 but left the group in 1958.  Joe DeRita was then hired in 1958 and became “Curly Joe.” Moe Howard’s daughter-wrote in her book on her father and her uncles-that Moe and Larry were overwhelmed. When they were booked to appear in Pittsburgh, Moe and Larry took the train from Los Angeles where they’d been residing for years to Pittsburgh. When they arrived at the Pennsylvania Railroad station in Pittsburgh, they saw large crowds at the platform, hundreds of adults and kids. Moe was sure the President of the United States or someone “important” was at the train station. They just could not imagine that the big crowds and interest were at the train station to see them.”

The period from the late 1940’s to the early 1960’s is referred to as the “Golden Age of Television.” It is during this period that culture and dramatic milestones were being broadcast. The commercial networks, NBC, CBS and ABC, were telecasting performances from Carnegie Hall featuring Leonard Burnstein and Arturo Toscanini. Playhouse 90 and Kraft Television Theatre featured performances such as Macbeth and Cyrano de Bergerac.

I suppose that I should have felt fortunate to have had such outstanding and socially redeeming programming available to me. Truth be told, I just didn’t “get” all those serious, highbrow shows. I was the type of kid that enjoyed the “real” entertainment that was available to us. Who needed Burnstein when we had Rodney and Knish? Who in their right mind would have chosen Arturo Toscanini over Alice the Goon and Popeye? Certainly not I! 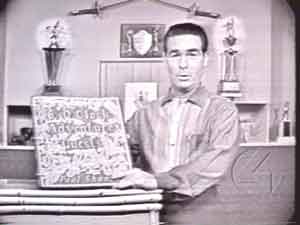 Although I spent a large part of my day playing outside, there were times when I would be allowed to stay inside and watch a favorite TV show. Paul Shannon Adventure time was one of my favorites. I think it came on daily, Monday through Friday around 4 or 5 o’clock. I enjoyed the show because of the cartoons and of The Three Stooges shorts. There were two special things I enjoyed about Adventure Time;

• the first was a character named Nosmo King. I believe it was Paul Shannon who played this strange looking person. I just remember a man dressed in a long trench coat and hat, smoking a cigar and walking through various scenes. I don’t think that he ever spoke, just walked in and out of scenes.

• The second special event I remember is that each summer, Paul Shannon 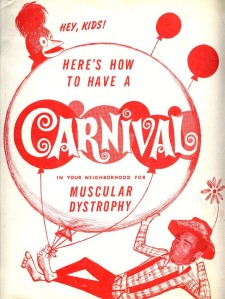 would ask the kids watching to hold Muscular Dystrophy Carnivals in their neighborhood in order to raise money for the battle against M.D. I was permitted to attempt this just one time. I think it must have been in 1961 or 1962. I was so excited to be able to plan the entire carnival with my neighborhood friends. I sent a letter to WTAE and Paul Shannon requesting a Carnival Kit and waited with eager anticipation for it to arrive. When it did, BOY was I excited. I believe my friends and I spent weeks and weeks planning all of the different parts of the event. Of course, we had to pool our resources and came up with a working budget of about $5.00 between all of us to use for prizes, supplies, posters, etc. About a month later, we finally held the carnival for the entire neighborhood. We had games, we had rides (basically pulling kids in a wagon down my dad’s driveway or yard), we had refreshments (compliments of the neighborhood moms), and finally, a petting zoo comprised of the neighborhood dog, Tuffy, my pet rabbit and a turtle that Donnie had found. Ringling Brothers had no worries about us stealing their virtuosity since we only managed to raise about $15.00. However, we still received a thank you letter from not only Paul Shannon, but Jerry Lewis too! (OK, it was a copy, but it still counted in our minds!) 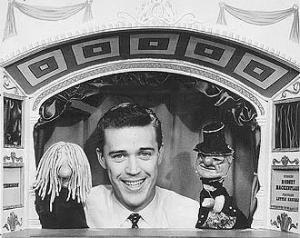 Another favorite show and cartoon was Hank Stohl’s Popeye and Knish Show. I’m not sure when the show was telecast, but I just remember the two puppets that were part of the show. Of course, there was Knish, who was nothing more than a mop head and what appeared to be a darning egg. His “friend” on the show was an old curmudgeon of a man named Rodney Hackenflash. Hank Stohl, the only human on the show, Knish and Rodney would introduce the various Popeye cartoons each day with a great deal of hoopla! I used to love the old Popeye cartoons. The black and white animated features that were produced in the 1930’s as part of King Features are the ones that I prefer. Of course, I enjoyed Popeye,

Olive Oyl and Brutus, but my favorite character was Alice the Goon! She was from a very early feature about Popeye and Goon Island. In case you are unfamiliar with this lovely lady, she stood about 7 feet tall, had a nose the size of a cucumber, hairy ankles and wrists and a bun and a bone on her head…. And those were her best features. She pursued Popeye continuously while murmuring her mantra “I love Pop-eye!”

Kennywood. On that day, the park would be teeming with celebrities from WTAE-TV and even some Hollywood celebrities. I remember standing gawking at personalities from shows like Paul Shannon’s Adventure Time, Ricki & Copper with Ricki Wertz, and Romper Room. Myron Cope was in attendance along with Nick Perry from Bowling For Dollars. Hollywood was represented by The Three Stooges and by Hank Stohl, who by that year, had been in several TV shows like The Rifleman and Ironsides. At various times throughout the day, 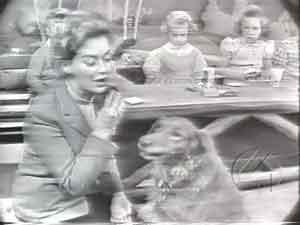 Kennywood had provided an autograph booth for the stars to meet their fans and sign autographs. I diligently waited in every line and was able to amass a complete collection of every personality who appeared on that first ever WTAE Day at Kennywood. I was so proud. However, here I sit, 46 years later and I couldn’t for the life of me, tell you what ever became of those collectables. 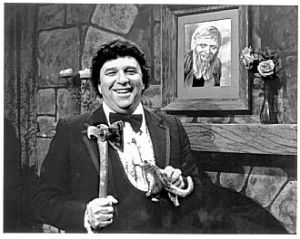 I am sure many of you have remember another iconic program that we used to enjoy(?) on Saturday nights! Remember Chilly Billy Cardille and Chiller Theater! That gen was broadcast on WIIC, back when there used to be a WIIC. It was perhaps the cheesiest, campiest horror show ever seen. I did a bit of research about the show and found some interesting history and trivia on Wikipedia:

Chiller Theatre was a late-night horror and science fiction movie program on WIIC  Channel 11, Pittsburgh, Pennsylvania. It aired from September 14, 1963 to January 1, 1984. It was hosted by Bill Cardille, known to fans as “Chilly Billy”. It was a Saturday night tradition for two generations of Pittsburghers. 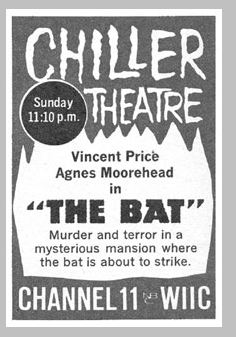 Two films were shown, one starting at 11:30 p.m. and the second starting at about 1:00 a.m. In between films, and at random times during the films, breaks were taken for skits such as reports from the “PSS”; in these skits, Bill Cardille would go into another part of the WIIC studios and pretend he was broadcasting from the (nonexistent) Pittsburgh Subway System. Other characters (portrayed by Cardille) included Captain Bad, Maurice the Matchmaker, and Mr. Magnificent. Cardille and WIIC publicist Robert Willis wrote the skits and sometimes Channel 11 staffers were enlisted to play bit parts. At the end of the show, Cardille would sit on a stool and banter with the studio crew.

Chiller Theatre was so popular in Pittsburgh that it kept Saturday Night Live off of its NBC affiliate WIIC in Pittsburgh for four years. Finally giving in to pressure from NBC, Chiller Theater was forced to follow SNL at 1:00 a.m. where it was reduced to a single feature movie program.

The show was remembered for several unique features, one being its theme song, “Experiment In Terror” performed by Al  Caiola, written by Henry Mancini. The original set was meant to be a laboratory. It was changed to a castle motif when a cast of supporting characters was added in later years. That cast included Terminal Stare (Donna Rae), Georgette the Fudgemaker (Bonnie Barney), Norman (Norman Elder), and Stefan the Castle Prankster (Steve Luncinski). During breaks in the movie, Cardille would perform several sketches, like reciting horoscopes, trivia, and telling a series of corny jokes to a giggling skull.

The show featured many guests over the years, including: Rod McKuen; Phyllis Diller as a monster Chilly Billy creates; Barbara Feldon as “Agent 99” from “Get Smart”; Lorne Greene; Albie And Friends performing their 1974 NIK single “Hexorcist World Premiere”; Vincent Price; Richard Campbell and Wayne Smith of the singing group The Gang, who performed “Frickased Chickens” and “All In Color For A Dime”; Jerry Lewis, promoting the Muscular Dystrophy telethon; and Bruno Sammartino.

I realize that these shows and these recollections are not part of Duquesne itself. However, I feel that the shows, the personalities, and the events, were part of the very fabric of our lives as we were growing up. TV played a big part in my live during in the late 50’s and 60’s. I recall being summoned to St. Mary Immaculate’s 7th Grade classroom at Holy Name on Friday, November 22, 1963 around 1:45 to watch in silence as we all learned that our President had been assassinated. Television WAS part of our life. Certainly, we may not have been able to chat with Paul Shannon or any other celebrity at the corner of Grant Ave, and 2nd Street, but he was in most of the living rooms in Duquesne several times a week.

This entry was posted in Life in General, Movies, Music, Radio and TV, Playing and Games. Bookmark the permalink.