There was a knock at my front door today. I looked out of the sidelight alongside the door and noticed a bike that had been dropped at the bottom of the steps and knew immediately that it was Billy. Billy is a 2nd grader that lives up the street and comes to my door often, asking to play with our two little dogs. I opened the front door expecting his usual request, but today was quite different. In his best little scripted door-to-door salesman voice, Billy ever so politely asked if I would like to buy some candy that his school was selling to raise money. How could I resist? I was the second person on his list of buyers (Grandma was first), but he had all the confidence in the world that he was going to manage record breaking sales for his school. I made my selections, gave him a check, and watched as he excitedly ran down the steps, eager to continue his door-to-door rounds.

After Billy departed, I thought to myself how little things have changed with some things. While I was attending Holy Name Grade School on North First Street from 1957 through 1965, we were tasked with many fundraising efforts that took us door-to-door. The fundraiser that was considered the most important occurred right around this time of year. For a period of two weeks, every child in the school was charged with selling Christmas cards and Christmas giftwrap. We were each given a box of each type of cards and a box of each type of wrapping paper. Altogether, we lugged 4 different boxes of cards and 2 boxes of giftwrap home to sell.

If I recall correctly, each of the boxes of cards and giftwrap had a different “theme.”

There were usually 2 different boxes of religious Christmas cards, a box of secular images of snowy country scenes, Christmas trees, wreaths, lanterns, and such. Finally, there was always a box of more juvenile images such as Santa Claus, snowmen, reindeer, and so on. The gift wrap was always sold in boxes as opposed to the rolls that are sold today. Each box would contain about 20 sheets of wrapping paper that was folded neatly into the 12 inch square box. Usually, there was a box for kids presents and a box for grown-ups.

While they were distributing the items to their students, each of the nuns or lay teachers would give their sales pitch ideas to the class on how to best sell the cards. In most cases, each student’s parents would end up buying all of the samples that were sent home. A few industrious kids would call upon their aunts and uncles to sell over their allotted 4 boxes of cards and 2 boxes of giftwrap. The price was from $1.00 to $2.00 per box for the 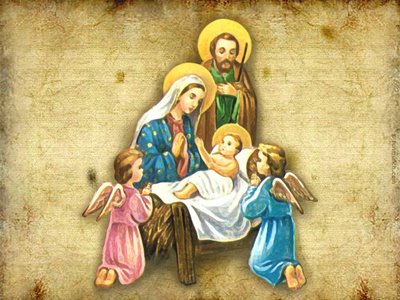 cards and giftwrap. Not a bad deal for all of the cards and paper you received! Any student who exceeds their sales goal would be recognized by their teacher and the ones who were the top seller in their class received a special prize. The prize would usually be something that was usually sold on the religious article cart. Anything from Holy Cards, to Rosary Beads, to books about the Saints would be awarded. Among today’s students, a prize of that type would probably elicit a response of rolling eyes. However, a prize of that type when I was a student, was appreciated and cherished.

Sister Delores was in charge of fundraisers when I was at Holy Name. She was the music teacher/nun and could typically be found carting her little push pedal organ around from room to room for the weekly music lesson in each class. Normally, she was a sweet and subdued little wisp of a nun with an equally kind and gentle spirit. However, when it came to fundraising activities and selling, she turned into the female version of Walmart founder Sam Walton. Her persistence and encouragement were unyielding. She was never mean, just insistent on each child selling their share.

When I was in 5th Grade with Mrs. Juliana, I became a local hero, at least in Sister Delores’s eyes. I decided to “go for the gold” and sell more than any other boy or girl in my class and in my school. I made this decision after I began going door-to-door as soon as I came home on the day we were given our selling supplies. It so happened that all I was able to sell cards or wrapping paper to 9 neighbors out of the 10 that lived on my street!

Encouraged by the results of my first day of selling, I told my mom that I was going out the very next day and knock on every door on Martin St., Mifflin St., Mellon Street and every street where I would usually go to on Halloween. Mom even helped me to organize a notebook for me to write down orders so I didn’t forget anything.

My second day of selling was as fruitful as my first. I began on Martin Street and also

covered the trailer park that was on Mifflin Street across from the electric sub-station. I remember being the perfect little salesman as I bravely went from door-to-door. Rather than being considered an interruption to their day, the “lady of the house” greeted me with a big smile and invited me inside so that I could show them what I was selling. At each house, I was able to give the person my “song and dance,” convince them how wonderful everything I was selling was, and close the deal. The other delightful part was that each home would usually offer me some type of treat. Cookies, cake, candies abounded, and far be it from me to have offended a potential customer by refusing their hospitality!

I continued on my mission to become the king of Christmas card selling. During the following week, I hit every home on Mellon Street, Texas Ave., Main Ave., Vermont Ave., and Highland Ave. My success rate continued to be pretty strong, but I had not yet reached a goal I had set for myself. To try to put me over my goal, I pulled out the “big guns” and visited each of my aunts and uncles to see if they wanted to buy anything. And BAM!! Before I knew it, I had reached my goal. I had sold over 275 boxes of cards and/or wrapping paper!!! 281 to be exact.

As the turn-in deadline drew near, I was so excited to let Mrs. Juliana and Sister Delores know how many I had sold. I had my mom’s help in summarizing the orders and figuring out the money. On the day when Mrs. Juliana called for the returns, I handed her my envelope and watched as her eyes grew HUGE as she reviewed the summary. She couldn’t believe it. She immediately stood up and told the class to behave, and that she need to go and see Sister Delores. She told me to follow her, and the two of us walked next door to the principal’s office.

Sister Delores was quietly sitting at the desk outside Sister Mary Daniel’s office. She must have been preparing a music lesson as we arrived since she was writing and singing to herself at the same time. I don’t remember any of the conversation between Mrs. Juliana and Sister Delores, but I do recall Sister Delores occasionally looking toward me with an astonished look on her face. Suddenly, she jumped out her seat, rushed over to me and gave me the biggest hug in the world. My face was pressed against her starched white bib for what seemed like eternity. She held my shoulders, pushed me back so she could look at my face and then drew me into another hug and kissed the top of my head. Neither she, Mrs. Juliana nor I could wipe the smile off of our faces for the entire day.

When it came time to award prizes for the best sales, I came in first place for my class and for the entire school. I suppose my 15 minutes of fame arrived early in my lifetime! I received a “mother lode” of religious articles for my efforts. Rosary beads, books and a very special statue, that I still have to this day. It was a statue of Saint Martin de Porres. At the time the statue was given to me, he had not yet been canonized. His canonization took place about 6 months later in May, 1962. I find it somewhat ironic that St. Martin de Porres’ feast day is the first saint’s feast day following my November 1st birthday. November 1st is All Saints Day, November 2nd is All Souls Day and November 3rd is St. Martin de Porres’ feast day! It appears that not only was Sister Delores talented, she was also psychic!

I reveled in my glory for a few days, and then things got back to normal in my young life. No sooner had we completed our task of selling cards as a school, we were quickly assigned another fundraiser to tackle. This one was selling Holy Childhood stamps at 1¢ each. Each page of these tiny booklets contained 10 seals, and the entire book contained 100. Our customer’s had the option of buying as many as they would like, but usually bought it by the page or the book.

Being the self-appointed king of selling at Holy Name, I pulled my own best Sam Walton moment and decided that I would sell the stamps when I delivered the cards that people had bought a few weeks earlier. I remember my suggestion as if it were yesterday;

“Mrs. Svirbel, since you bought 2 boxes of cards from me, you may want to buy some

Whether it was my sales pitch or the fact that in most cases the moms would laugh at the 10 year old salesman standing in front of them, they would usually end up buying them. Although I didn’t sell as many stamps as I had hoped that year, I still managed to sell about 25 books of stamps. I remember that the sales pitch we were told to use, was to let the people buying the stamps know that they were helping us to buy “pagan babies.” Not adopt or support them, but BUY them. With the same approach today, we’d probably be accused of trafficking in human beings!

The interesting part of this entire scenario, was the comfort level my mom had with me visiting house after house without her involvement. She didn’t know the people along Mellon St. or the streets that ran perpendicular to it, yet the trust was there. The thought of anyone harming a child or anyone in the area for that matter, wasn’t even a consideration. The necessity of the “don’t speak to strangers” education children live by today is sad, but very important. Trust has made way for locked doors, security systems, apprehensive parents and a general mistrust for our fellow man. Oh, for the simpler times.

This entry was posted in Christmas Memories, Church and School - Holy Name, Stores and Businesses. Bookmark the permalink.