Throughout America, the end of October brings around two events that definately signal  the Fall and Winter seasons are upon us. Duquesne was no different from the rest of the country when we were growing up.

While rummaging through The Duquesne Times, I came across a few items that I thought would interest you. The first is the picture below. Appearing in the November 4, 1954 issue of the Times, just like World Series winning Giants that year, Duquesne’s Dodgers won the the 1954 Duquesne Little League Series for the third straight year! Besides the team, the managers and coachs, Charles Kahler and Tony Herrerra along with the team sponser William Champ are pictures. 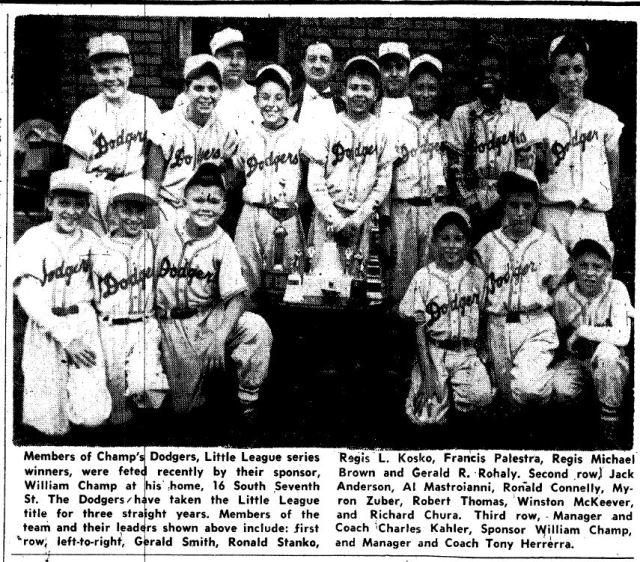 For you baseball history buffs out there, the 1954 World Series 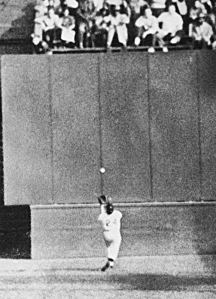 matched the National League champion New York Giants against the American League champion Cleveland Indians. The Giants swept the Series in four games to win their first championship since 1933, defeating the heavily favored Indians, who had won an AL-record 111 games in the regular season. The Series is perhaps best-remembered for “The Catch”, a sensational running catch made by Giants center fielder Willie Mays in Game 1, snaring a long drive by Vic Wertz near the outfield wall with his back to the infield. It is also remembered for utility player Dusty Rhodes’ clutch hitting in three of the four games. Giants manager Leo Durocher won his only title among the three pennants he captured in his career. After moving West, the San Francisco Giants would not win a World Series until the 2010 season.

I was able to locate two other examples of how Duquesne celebrated Halloween. The first is a recap of the Halloween Parade and winners for 1954. What a wonderful way to celebrate with our friends and neighbors! Were you a winner that year?

Finally, the following photo embraces “small town” news at its best. I found this photo of 8 year old Barbara Finkelstein’s birthday and masquerade party held in Duquesne. The year, 1952, the month, October. If you’re out there somewhere Barbara, happy 67th!!!

In closing, best wishes for a Happy Halloween!!

This entry was posted in Autumntime, Holidays - Non-Christmas and New Years, Sports. Bookmark the permalink.