In Tribute to a Friend

During my recent four month hiatus, I, no, WE lost a friend, mentor, neighbor and a true curator of all things Duquesne and Mifflin Township.

I began writing The Duquesne Hunky almost 5 years ago. Shortly after I began writing the blog, which by the way, I never suspected anyone would ever read, I received an email from Jim Hartman. The email was in response to a “roll call” I was trying to conduct to ascertain who was actually reading the blog. Being a very proud resident of the area, Jim was one of the first to raise his hand, along with his brother Alan, to say “I’m here!” His February 2011 response to the roll call read as follows:

Jim and I became fast friends during the months that followed, corresponding by email and exchanging photos, stories and information. In April of 2011, I made a trip to Duquesne to visit family and to finally meet Jim and explore his memories and his “baby,” The Mifflin Township Historical Society.

Our first meeting took place at the McDonalds on Lebanon Church Rd. near the Century III Mall. We sat drinking our “senior citizen” cups of coffee and prattled on for hours about 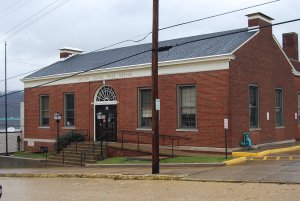 my blog, the connections he and I shared, the Historical Society, and our childhoods until Jim finally decided it was time to visit the Society office. As the day progressed, I did find out that Jim was very familiar with my own family, having been our mailman for a number of years on Thomas Street and working at Duquesne’s Post Office!

I followed Jim to the West Mifflin Borough building which is now located on the corner of Lebanon Church Road and Camp Hollow Rd. When Jim opened the door to the Historical Society’s office, I stood there in awe, surveying the enormous amount of materials that had been collected and constituted the Society’s data base. Historical maps, newspapers, yearbooks, magazines, government documents and banks of computers, printers and scanners lined every shelf and desktop in the office. What Jim and the society’s volunteers had been able to collect was truly overwhelming.

Jim was always ready and willing to share information about the area. It was during that visit in July that I was given what I consider the “keys to the kingdom.”  Prior to my departure, Jim shared the data base for past issues of  The Duquesne Times, The Duquesne Star and The Observer as well as a library of archival photographs. I will always be grateful to Jim for providing such an incredible information source for The Duquesne Hunky.

In final tribute, I am posting Jim’s birth announcement from the October 12, 1945 issue of The Duquesne Times. That announcement was the start of something big!! The birth announce is followed by a post that I posted in July of 2011 referencing much deserved recognition that Jim had received.

CONGRATULATIONS! I was alerted to the fact that there was an article published in

the IN West Mifflin Community Magazine that paid homage to someone who has been both a friend and an advisor. Jim Hartman, President of the Mifflin Township Historical Society, received some much deserved praise with a full-page spread about his activities and that of the Historical Society.

The work that not only Jim, but the dozens of volunteers do is something for which we all should be very grateful for. If you haven’t had the opportunity to visit the Historical Society’s webpage, I have included a link below. I have also included a link so that you can view the entire “IN West Mifflin” Magazine.

While the website, http://www.mifflintownship.org, is still a work-in-progress, because the content is updated by volunteers, it is beginning to take shape as an excellent historic resource for the Monongahela communities it represents, the group also maintains a reference room in Suite 202 of the municipal building which contains various newsletters and other printed information, old yearbooks, historical maps, family photos and histories, and CDs of old newspapers from Clairton, Duquesne, Homestead and other communities. Donations of documents and other historical items also are welcome (in original or copy form).

The Mifflin Township Historical Society is run entirely by volunteers and its office and reference room is only open on Fridays from 10 a.m. to 4 p.m. The office is located at 3000 Lebanon Church Road, Suite 202, West Mifﬂin, PA 15122. Other hours are available by appointment which can be made by contacting President Jim Hartman at 412.600.0229 or at ihartman15122@gmail.com.

To say that Jim Hartman has been keeping busy since he retired over a decade ago is an understatement.

The 65-year-old formal postal worker has always kept a busy schedule. When his daughters were younger, he coached their softball teams and was president of the band boosters.

Today, he keeps busy building and designing websites, acting as president of the Mifflin Township Historical Society, and volunteering with the West Mifflin Lions Club. “lt’s easy to sit around and complain about how bad things are,” he said. “l would rather get involved and make the bad things better.”

Hartman taught himself how to design and update websites using various software programs and now responsible for maintaining several dozen for local non-proﬁt groups and businesses, including the site for the Mifﬂin Township Historical Society.

“I’ve always like history, even when I was back in grade school,” Hartman said. “lt’s the story of what we are and why we are.” When his father died in 1996, Hartman said he started researching that side of his family’s genealogy and initially had a difficult time ﬁnding any information. A mixed religion marriage in his family history alienated other members of the family and ties were broken.

Today, he’s the keeper of a family tree with over 5,000 names. Every time there’s a birth, marriage or death, his extended family calls him so that he can add the information to the database and expand the tree, and how relatives use the tree to explain their own roots to others.

“My cousin’s granddaughter took a three foot by nine foot copy of the family tree to school for show-and-tell,” Hartman said. “The kids in her class were very impressed. They got to see how all of us are related to each other in some way.”

“Mifﬂin Township at one time included Homestead, West Mifflin and a dozen other communities, so it made sense for us to combine our resources and form one organization,” he said. ”

As president, Hartman speaks to groups, maintains the website, and continuously adds materials to the organization’s reference room. He received some funding from the slate to transfer decades of out-of-print local newspapers from microﬁlm to CDs. Some of the old papers now on CD include the Clairton Crucible (last published in 1906) and the Duquesne Times. “What most people ﬁnd interesting are the death notices and obituaries,” Hartman said. “|t’s a great way for them to research their own family trees.”

When he’s not building websites or gathering information for the historical society, Hartman can be found volunteering his time with the West Mifﬂin Lions Club. The Lions Club is an International public service organization probably best known for recycling used eyeglasses and paying for other vision services for the visually-impaired in the community.

In addition to the vision services, the 53-member West Mifﬂin chapter has helped the local food banks, purchased emergency services equipment for local EMS providers, and holds fundraisers throughout the year for different causes.

I have so much to share with you now and I cannot wait to take you on the journey back to our youth. I would be remise if I didn’t put in a plug for Jim and the Historical Society. Without question, every penny contributed to the Society by becoming a member is worth it. It pays for the equipment, the materials, the website and everything that is needed to maintain this wonderful “memory bank.”

12 Responses to In Tribute to a Friend