As I review past issues of The Duquesne Times, I occasionally come across articles that make me understand that living in Duquesne was far from living in a vacuum went it came to world events.

May 7, 2015 marked the 100th Anniversary of the sinking of the RMS Lusitania. Some say 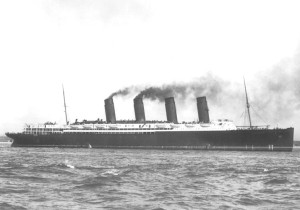 that this action by the Germans, was one of the catalysts that the eventually led to the United States involvement in World War I.

Page one of The Duquesne Times published on May 14, 1915 featured an article about one of Duquesne Mill’s own, a passenger on that fateful voyage. One thousand one hundred nineteen of the 1,924 aboard died that day, but fortunately, Mr. Dyer was among those who survived.  Mr. Dyer was not a resident of Duquesne, but rather an employee at the USS Duquesne Mill and a friend to his co-workers. The front page story read as follows: 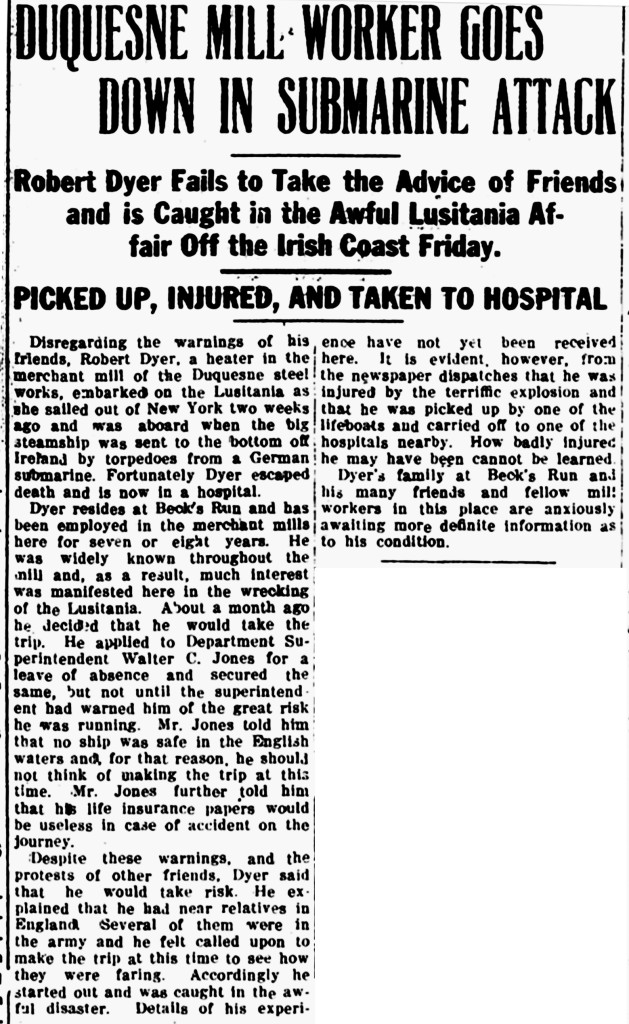 I found the following animated depiction of the sinking of the Lusitania that was released in 1918. I find it fascinating to see how people were made aware of important events before the onset of mondern day technology. 1918 vintage animation of the 1915 event is by Winsor McCay.

“The Sinking of the Lusitania: An Amazing Moving Pen Picture by Winsor McCay”

Winsor McCay was a prolific cartoonist and animator in the early 1900s, and is toted as the father of the Sunday Comics. He is most famous for his serial comic series “The Adventures of Little Nemo in Slumberland” and the animation “Gertie the Dinosaur”, but  several other notable works by him are “How a Mosquito Operates” and “The Centaurs”.

torpedoing and subsequent sinking of the British passenger liner Lusitania on May 7, 1915 by a German U-Boat in WWI. The film, made in 1918, was propaganda meant to stir up anti-German sentiments among the populace (though how effective it was can’t be said as the war’s end was only months away by then), but the animation, stunning in its quality, continues to impress and move audiences today, over a hundred years later. That the film was made only three years after the Lusitania disaster itself means it is also the earliest documentary of the tragedy ever made.

Winsor McCay drew and inked every frame of the animation himself, and it’s said he created over 25,000 individual frames for the animation. A comical scene from the original film (which is missing from this video) shows him discussing with friends his idea to animate and document the disaster, and then couriers helping him carry whole barrels of ink. The live-action introductory scene can be seen here.

There are some historical inaccuracies in the video, namely that it was not U-39 that torpedoed the Lusitania, but U-20; Only one torpedo was fired at the Lusitania, not two (the second explosion, which was the vessel’s death knell, remains a mystery, and none of the theories of what it was have been definitively proven); and that the Lusitania sank in 18 minutes, not 15. Otherwise though the film is accurate, and it certainly does justice to the drama of the tragedy.

The Sinking of the Lusitania, 1915

The Lusitania made her maiden voyage from Liverpool to New York in September 1907. Construction had begun in 1903 with the goal of building the fastest liner afloat. Her engines produced 68,000-horse power and pushed the giant through the water at an average speed over 25 knots. Dubbed the “Greyhound of the Seas” she soon captured the Blue Ribbon for the fastest Atlantic crossing.

The British Admiralty had secretly subsidized her construction and she was built to Admiralty specifications with the understanding that at the outbreak of war the ship would be consigned to government service. As war clouds gathered in 1913, the Lusitania quietly entered dry dock in Liverpool and was fitted for war service. This included the installation of ammunition magazines and gun mounts on her decks. The mounts, concealed under the teak deck, were ready for the addition of the guns when needed.

On May 1, 1915, the ship departed New York City bound for Liverpool. Unknown to her passengers but probably no secret to the Germans, almost all her hidden cargo consisted of munitions and contraband destined for the British war effort. As the fastest ship afloat, the luxurious liner felt secure in the belief she could easily outdistance any submarine. Nonetheless, the menace of submarine attack reduced her passenger list to only half her capacity.

On May 7, the ship neared the coast of Ireland. At 2:10 in the afternoon a torpedo fired by the German submarine U 20 slammed into her side. A mysterious second explosion ripped the liner apart. Chaos reigned. The ship listed so badly and quickly that lifeboats crashed into passengers crowded on deck, or dumped their loads into the water. Most passengers never had a chance. Within 18 minutes the giant ship slipped beneath the sea. One thousand one hundred nineteen of the 1,924 aboard died. The dead included 114 Americans.

Walter Schwieger was captain of the U-Boat that sank the Lusitania. He watched through his periscope as the torpedo exploded and noted the result in his log, “The ship stops immediately and heals over to starboard quickly, immersing simultaneously at the bow. It appears as if the ship were going to capsize very shortly. Great confusion is rife on board; the boats are made ready and some of them lowered into the water. In connection therewith great panic must have reigned; some boats, full to capacity are rushed from above, touch the water with either stem or stern first and founder immediately.”

In the ship’s nursery, Alfred Vanderbilt, one of the world’s richest men, and playwright Carl Frohman tied life jackets to wicker “Moses baskets” holding infants in an attempt to save them from going down with the ship. The rising water carried the baskets off the ship but none survived the turbulence created as the ship sank to the bottom. The sea also claimed Vanderbilt and Frohman.

The sinking enraged American public opinion. The political fallout was immediate. President Wilson protested strongly to the Germans. Secretary of State William Jennings Bryan, a pacifist, resigned. In September, the Germans announced that passenger ships would be sunk only with prior warning and appropriate safeguards for passengers. However, the seeds of American animosity towards Germany were sown. Within two years America declared war.

I decided to look back a little further and came across the following front page article from the April 26, 1912 edition of The Duquesne Times.

If you enjoy these little snippets of history from Duquesne, please let me know, and I’ll keep on researching and posting them. Our hometown is obviously steeped in history, and it’s exciting to learn all about it.

5 Responses to The World Touches Home