There is Hope for our Hometown

I came across a VERY interesting story while I was checking out the online headlines on AOL (American On Line.) I was so thrilled when I immediately recognized the photo that accompanied the headline and article. Beyond recognizing the town of Braddock, I was delighted with the message of hope that the article conveyed.

Within a stone’s throw from the city we all love, Duquesne, Braddock’s mayor has taken the bull by the horns, thought outside the box, and took steps toward recapturing the  spirit, pride and hope the city needs to survive.

I have always thought that Duquesne has the potential to accomplish similar success. Given the city’s adjacency to a monumental draw such as Kennywood Park, the views of the Monongahela and the industrial history on its banks, it could be achieved.

I have reposted the article for your enjoyment. Be sure you check out the video as well. It will immediately remind you of some of the sights from Duquesne. 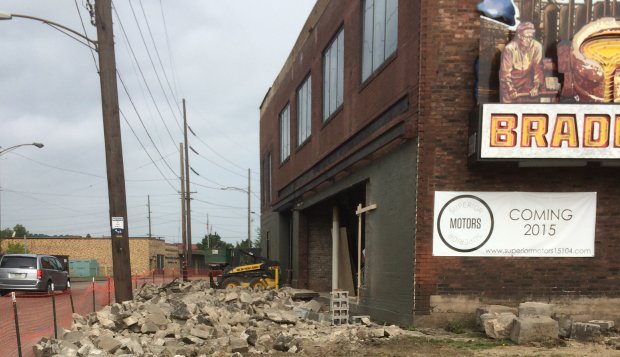 How Kickstarter’s Most Funded Restaurant Is Transforming a Town

Kevin Sousa’s Superior Motors is teaching a town to thrive

At the beginning of 2014, Kevin Sousa broke records when he raised $310,255 on Kickstarter for his new restaurant Superior Motors. It was the site’s most-funded restaurant project to date and it would not even be opening in New York, Los Angeles, or any cosmopolitan area. Superior Motors will open in Braddock, Pennsylvania, a struggling town outside of Pittsburgh, which currently does not have any kind of restaurant, not even fast food.

In addition to being the first restaurant in Braddock, Superior Motors will stimulate the town’s already existing ecosystem, by providing employment, a culinary training program, and sourcing its products from area vendors. 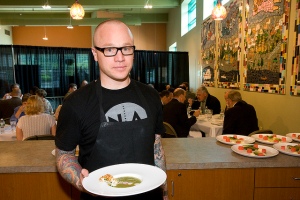 “I have as much of a passion for the kitchen environment as I do actual food,” Kevin Sousa told AOL Jobs. “I just feel really comfortable around restaurant people. They’re my people.”

In 2010, his years of working in a kitchen ultimately led to him opening Pittsburgh restaurant Salt of the Earth. As chef and owner of Salt of the Earth, Sousa created a fine-dining restaurant that was also involved with its community, using locally sourced products and working with charitable organizations. However, he wanted to take his social outreach work even further, using his skills and expertise to benefit others. 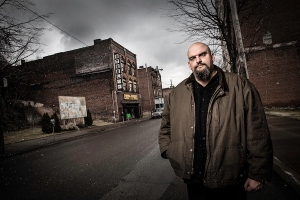 whose efforts to revitalize the town have been covered by The New York Times and The Colbert Report. The two became friends and Fetterman introduced him to what was going on in Braddock.

Once a bustling steel mill town, the steel industry’s decline in the United States resulted in Braddock losing 90 percent of its population and many of its buildings. With Fetterman acting as a consultant, Sousa developed the idea for a restaurant that utilized Braddock’s existing urban farms and abandoned properties, while offering a free-of-charge job training program for at-risk teens or people who might not otherwise have such an opportunity. Fetterman also provided a rent-free industrial space. The space is a former 1920’s indoor car dealership, whose name the restaurant would revive –Superior Motors.

It was a great idea, but how could they make it happen?

“Banks were not tripping over themselves to give us money,” said Sousa. Even though he already had a reputation as a successful restaurant owner in Pittsburgh, no banks, financial institutions, or foundations were willing to believe that Braddock was a good investment.

With traditional financing not an option, he turned to Kickstarter. He set the goal high, aiming to raise $250,000 in 33 days. A Kickstarter campaign is a significant amount of work and Sousa wanted the payoff to be a dollar amount that would actually facilitate getting the project started.

In December 2013, the Superior Motors Kickstarter launched with a video that told the story and mission of their project.

“My advice to anyone who is getting ready to launch a Kickstarter campaign and spending all this time on the wording of the page? Take all of that time and effort and put it into a strong video,” said Sousa.

Sousa and Fetterman reached out to their own networks and the local press quickly picked up on the story. Thirty-six hours before their campaign ended, they had raised over $100,000, but were still short of their $250,000 goal. So the night before their Kickstarter ended, they threw a party above where the restaurant would be to thank Braddock residents and all the people who had contributed.

All three channels of the local media showed up to cover the celebration, which involved local breweries and live music. The press and spirit of the party helped the campaign go viral in the next few hours. Sousa started getting constant notifications on his phone that people were donating. The morning after the party they hit their goal and by the end of the campaign they had exceeded it, raising $310,255.

Since the Kickstarter campaign ended, Kevin Sousa has been working non-stop to prepare for the Superior Motors opening in early spring 2015. He lives in Braddock now, and every day, as he walks down the street with his dog, neighbors stop him to chat about the progress of the restaurant.

A typical workday involves attending meetings with any of the various people involved in the restaurant’s construction, including the architect, the construction team, the demolition team, lighting designer, or the bread baker who will be designing their outdoor bread oven. Three days a week he’ll be cooking in one of the kitchens, often for a charity or promotional event in Braddock. In addition to working on Superior Motors, he still operates two other restaurants in Pittsburgh and raises two kids with his wife.

Sousa is also developing the curriculum for the culinary training program. In this five-day-a-week program, students will learn culinary training, agriculture, and basic life skills at Superior Motors on Monday, Tuesday, and Wednesday. On Thursday and Friday, they will work paid positions at the Superior Motors restaurant and farm for real work experience. The application process for the program will open at the end of October and it’s expected to receive over hundreds of applications to fill a few spots. 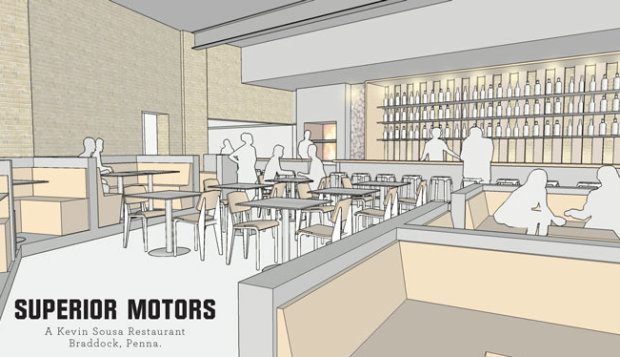 When Superior Motors opens, visitors can expect food that will be seasonally driven, sourced from local farms, and generally mindful of the spirit of Braddock. It will toe the line between fine dining and a casual neighborhood vibe. Braddock residents will be 50-75 percent of its staff and all residents will be offered a significant discount to eat there.

“Cost should never be an issue for anyone to eat here,” says Sousa. After expenses are covered, any profits made by the restaurant will be filtered through Braddock Redux, the non-profit organization that is operating the job training program.

Sousa ultimately hopes that Superior Motors’ restaurant/culinary training project can be a model for other post-industrial towns across the Rust Belt that have had the same difficulties as Braddock. He knows his project is not easy, but the story of his Kickstarter shows that the Braddock and Pittsburgh community are interested in seeing long-term success.

“Pittsburgh supports its own,” says Sousa, and the over 2,000 individual backers of the Superior Motors Kickstarter are proof. While there were some high pledges (including one from actor Christian Bale), most of the pledges came from locals, and were under $100.

Sousa credits Kickstarter as a platform for helping small businesses change the world. “If banks and traditional financial institutions don’t change the way they operate, they’re going to be left behind,” he says.

It’s likely the people of Braddock will not wait for them to catch up, they will already be working as a community to find innovative ways to build the projects they deserve.

10 Responses to There is Hope for our Hometown