OK. I know I haven’t written for awhile, but things have been a little crazy on my end. Getting ready for the holidays has been a bit chaotic this year, and with a grandson who turned two in July, the concept of Christmas, Santa and toys has become VERY real in his

I’ve been fortunate to have been able to spend a lot of time visiting my grandson over the past few weeks. There has been much going on at my daughter’s house in Exton, PA, so I have been helping her get ready for the holidays. We received the wonderful new that Jackson is about to become a Big Brother with grandson #2 scheduled to arrive in May, 2014!

One of the most enjoyable parts of visits with my grandson has been sharing his excitement about Christmas and Santa Claus’ upcoming visit. He and I began a long standing tradition of paging through toy catalogs while listening to Christmas music while I was there. I always enjoyed the anticipation of Christmas as a child. It would fill me with so much excitement and anticipation whenever a toy catalog would arrive in the mail or if I would see Christmas toy ads in the paper. The concept of TOYLAND was Utopia to me in those days.

I recall visiting many of the stores in Duquesne and McKeesport that loaded-up with toys for Christmas. Many stores that normally sold unrelated goods became marvelous havens for toys. The 2nd floor of Schink’s Hardware transformed each year. I remember the narrow steps that led too the second floor. They were to the left as you entered the store, somewhat tucked behind to front counter. I also recall occasional trips to a store near South Park at Christmas to look at toys. I believe it was normally a nursery/garden center called Versharons. What joy those visits brought me.

In order to share the excitement with you, why not pop on an old Christmas vinyl record album, grab a nice cup of coffee, tea or hot chocolate, turn on the Christmas tree and leaf through the pages of a toy catalog from Schink’s from 1954 AND some Christmas Greeting ads from the Duquesne Times from that same year. It’s beginning to look a lot like Christmas! 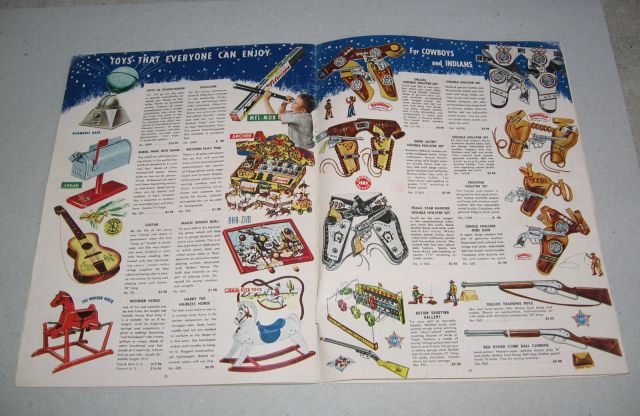