After posting the picture of Duquesne’s Crawford Mansion, there seemed to be a flurry of interest in the history of the structure. I really found all of the information and links to articles and sites fantastic and super interesting. Thank you to everyone who contributed.

I researched The Duquesne Times archives and found the following piece about the mansion and the plans to demolish it. As Lou Andriko posted in his comment, the structure met its demise in August of 1943. The article below was in the July 30, 1943 edition of Times and I fully expected to find additional articles that provided additional details along with photographs. Unfortunately, the only other information that appeared in The Times was a small piece about the contractor that would be doing the razing. That article was published the following week on August 6, 1943. No additional information appeared after that issue. 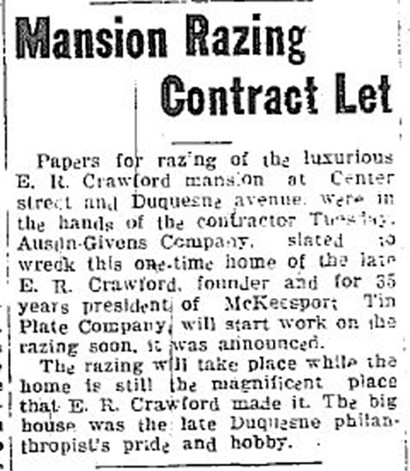 This entry was posted in Duquesne Buildings, Duquesne History, Uncategorized. Bookmark the permalink.

25 Responses to The Crawford Mansion’s Finale