One of Duquesne’s Icons – A Cultural Playground

“The loss of valued places diminishes us all, and the most unnecessary losses, the most indefensible, result from ignorance.”
English Heritage 2002.

I recently had the opportunity to visit my old stomping grounds in Duquesne. I have been fortunate to be able to visit the area once or twice a year since I moved away back in 1972. The past few years have been an exception however. As is often the case, “issues” creep up that cause unexpected changes and cancelled plans. My regular visit schedule somehow was put on hold, so it had been a number of years since I had last been to visit my remaining family in the Duquesne area.

The drive from my home in Maryland to Duquesne takes about 8 hours. By the time I roll into Duquesne, I am usually quite road weary and ready to kick back at one of my relative’s homes. For some reason, my trip back to my hometown in December felt

differently. I had arrived via the same route as always. Once I turned off of westbound Rt. 30 at Lincoln Way toward White Oak, it felt like “home.” The sights and names as I head to Duquesne bring back great memories. I have a cadence of mental images of what would have been in view as I travel along Lincoln Way. In my youth, the world didn’t extend too far beyond the borders of White Oak. Even as a teenager, The White Elephant was about the furthest I’d travel.

I pass by the corner of Jacks Run Rd (Rt 48) where I vaguely remember Rainbow Gardens Amusement Park. I don’t think my parents ever took us there. There was never a need. After all, we had Kennywood!!  Perhaps the most memorable landmark along the way was at the end of Lincoln Way where it dead ended into Rt 148, aka 5th Avenue Extension. There is a mystical and magical store that exists there to this day. Not unlike the pot of gold at the end of the rainbow, stands Blooms Cut Rate! 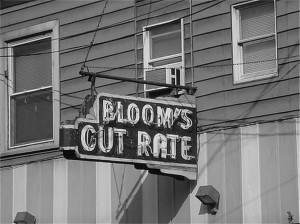 Since my Aunt Bubs (yes, that’s what we called her) and my Uncle Clell, along with cousins Kathy and Buddy lived in White Oak, we always drove past Bloom’s Cut Rate when visiting. Mind you, we never stopped and actually went into Bloom’s, but I was always in awe. Huge stuffed animals and over-the-top kitschy statues lined the windows. At Christmas time, the place virtually pulsed with Christmas light and novelty decorations. Rumor had it that it was actually a “numbers joint”, what ever that means. My bucket list now officially contains “shop at Bloom’s Cut Rate” as an official “must do before I die” item.

As I closed in on Duquesne, I knew I had arrived once I rounded the bend and saw the

familiar Duquesne–McKeesport Bridge. Just on the other side of Monongahela River was home, at last. I rushed across the bridge, past Center Street, and onward toward Duquesne’s City Center. Just around what are now the remnants of the Cochrandale projects, I remembered the row houses that used to line the street. Debbie Abbatangelo used to live in that area and I remember visiting and being up close and personal with the steel mills across the street.

I finally reached Library Place and turned left to head to my Aunt Peggy’s place for a visit. As I made that turn onto Library Place, old frustrations as well as fond memories came rushing back. The fond memory was of the Carnegie Library that once was majestically perched at the top of Library Place. The frustration I felt, was knowing that a gem and a friend of the Duquesne hunkys had needlessly been taken from us in 1968. 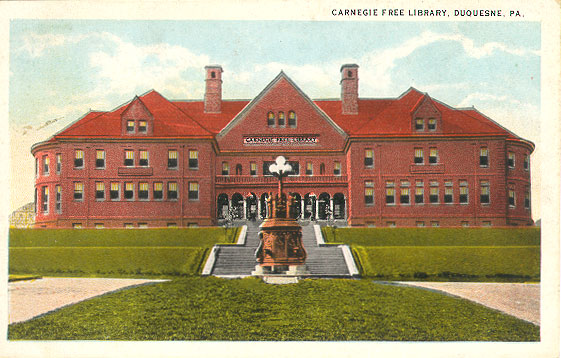 The library was a magnificent building, built in 1904 by Andrew Carnegie to serve the employees of Carnegie Steel Company mill and their families. In the beginning, the company paid for the operation of the Carnegie Free Library of Duquesne. However, Andrew Carnegie sold the Carnegie Steel Company to J.P. Morgan of New York City, and the United States Steel Corporation was formed. To take care of the library in Duquesne as well as two others in the area, Mr. Carnegie endowed one million dollars to be shared among the three libraries. Obviously, the money ran out at some point along the way.

The Duquesne Library used to be our cultural playground, our educator, our spa, our trainer, our meeting ground, our playground and our right of passage. When I think back, so many components of my early years involved the library. Although I enjoyed reading, I was by no means a “bookworm.” However, I remember how joining the library for the first time was a revered and time honored

tradition for  the students of Holy Name Grade School. I remember being marched over to the library when I think I was in 2nd grade. Sister Martin de Porres was our drum major as we marched up the front steps of the Carnegie to be initiated in the “system.”

The librarian wasn’t your prototypical stern, bespectacled, pencil totin’ and bun wearing individual. I remember how patient she was, not have to utter a single  “shhhhhhh!” Of course, the good Sister would never have let us forget it if we had not been perfect angels. We all patiently waited our turn to become official card carrying library members. Once that feat was accomplished, we were given a tour of the library, complete with an

explanation of the Dewey Decimal System and the card file, which went completely over our heads! I think it was how the librarian and Sister got their kicks, by turning all of our excited faces into a “deer in headlights” group. We eventually were able to gather our three book limit and proceed to the desk to be stamped and checked out. What a thrill.

I remember the library portion of the Carnegie was to the left of the front entrance, in the building’s south wing. The front main entrance brought you into the lobby area of the theater. I recall that there was a grand staircase that led to the upper areas of the theater. The lobby area and every part of the building was laden with highly detailed oak columns, panels and trim. There were loads of huge windows and Carrera marble floors. Even the treads of the steps were marble. I didn’t realize it at the time, but apparently, Mr. Carnegie spared no expense when building a library for his employees. There was no detail overlooked and the building exuded elegance at every turn.

The children’s portion of the library was located behind the librarian’s desk complex. The room was huge and populated with very sturdy and very “sensible” oak tables and chairs. The bookcases that lined the walls were also made from the same sturdy oak and each book was perfectly placed on the shelves. There were large hanging pendant light fixtures throughout the room as well as large oak trimmed windows at the top of each 20 ft. wall. Being able to have enough light to see to read was never a problem.

My second “rite of passage” at the library was as eagerly anticipated as my initial joining of “the system.” I believe it was in 6th or 7th grade that students were initiated into adulthood by having full access to all parts of the library. This meant  that we were now able to cross the marbled hall that separated the children’s and adult’s library areas and be able to enter and use the adult area. The best part was that we could now have access to the open stacks at the very end of the library. There were three levels (I think) of books connected by curved iron stairs and the best part were the floors that were made of glass!! Mind you, it was opaque glass about the thickness of Mr. Magoo’s glasses, but none the less, it was WAY COOL!!! Ahhh, life was good. 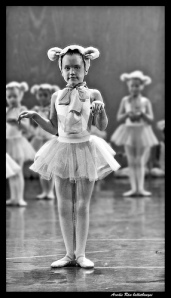 Of course, the lending library wasn’t the only wonderful part of Duquesne’s Carnegie. The theater was the venue for many a little girl’s dreams. Pat’s Dance Studio in Duquesne Place held its annual Dance Review on stage at the Carnegie each year. I think I may have been in the theater only once or twice for my cousin Karla’s recitals, but I remember it being dark and ominous. I have tried to research if any people or shows of notoriety appeared there, but I had no luck. I guess Karla’s appearances MUST have been the most famous.

The north wing of the building housed the athletic portion of the Carnegie. I, along with at least 99% of Duquesne kids, learned to swim there. You had to descend into the lower portion of the building to reach the pool area. As soon as you started down the steps you would smell the chlorine and hear the splashing from swimmers and divers. From what I can recall, the pool was fairly large and the deep end was exactly that…. deep! There was a diving board at the deep end and I eventually, after considerable coaxing, became brave enough to try it out. I had swimming lessons every week and at first, I wasn’t that excited and rather apprehensive. Holding onto the rails at the edge and practicing kicking seemed boring to me. However, I soon felt right at home and “almost” never was accused of holding onto the side for too long.

Although I enjoyed swimming, I never got adept enough or brave enough to join the

Carnegie’s swim club/team, The Dolphins. Being a Dolphin was considered a real status symbol around the pool you know. My cousin Paula was a Dolphin team member and was my swimming idol! I remember one part of my swimming experience at the library above all others. I recall the very first time I was able to roll up my wet bathing suit into my towel and carry my terrycloth jellyroll as a status symbol as I walked home. What can I say? Sometimes you’ve just got to celebrate those small successes!

Unfortunately, I was never able to make use of the second floor of the athletic wing. It contained a huge basketball court and exercise room. I remember seeing the parallel bars and the pummel horse, although I didn’t know what they were at the time. It was always bright and sunny up there, but when I was daring enough to climb the stairs and check it out, I  don’t  recall ever seeing the facilities being used. Not really the Gold’s Gym of yesteryear.

I’ve rambled on forever about the library, but I suppose that’s a good indication that it was

a child’s wonderland. Even the handrails that were firmly cemented in place at the front and Kennedy Ave. entrances were fun. They were double barred and GREAT for safely sliding down the course of steps on. Who would have ever thought that my generation would be the last to enjoy the Carnegie. I still shake my head in disbelief whenever I pass by the former site of our cultural upbringing. Mr. Carnegie, thank you for the gift of a lifetime.

So, what did actually happen to the Duquesne Carnegie Free Library?

In the 1960s, the Duquesne library was sold to the school district for one dollar. Shortly after taking control of he Carnegie Free Library of Duquesne, the Duquesne City School District razed the structure, in June of 1968, to make-way for a school district annex (possibly a new gymnasium for the high school, located across the street). However, when the school district learned that the construction of a such an annex would result in a partial loss of state funding, the project was quickly dropped. Thirteen 1970s-era split-level houses now occupy the former library property, a cul-de-sac named “Library Place.”

26 Responses to One of Duquesne’s Icons – A Cultural Playground