Recollections of a Little Hunky’s Christmas 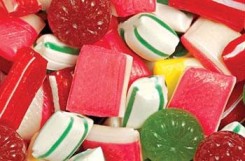 As we all rush around busily preparing for Christmas celebrations, I believe it’s refreshing to take a moment or two to just relax and recall treasured memories about the holidays from your youth. Somewhat like a bowl of Christmas hard tack candy, the memories come in all shapes, sizes and colors, and each one is as sweet as the next.

A few of the moments or special treasures I recall are:

– Mom had a small collection of milk glass candy dishes. Each Christmas, her tw

o favorite would make their way to the end tables in our living room with one being full of hard tack candy, and the second containing streams of ribbon candy. If any remained uneaten by the end of the holidays, they would have become stuck to one another due to many days of humidity and little hands rummaging through to find their favorite flavor! (Who? ME?!?!?)

– Each window in our house was decorated with a cluster of three silver bells, made from a heavy aluminum foil and suspended from red ribbons. I don’t know what ever happened to those bells, but I have never been able to find reproductions of them.

– Each December, Mom would unpack the Christmas decorations in order to prepare for trimming the tree. Among the boxes of lights, balls and window decorations were two s

pecial mugs that were carefully wrapped and tucked inside a box. The mugs were in the shape of Santa with a candy cane handle. My brother, Steve, and I used these mugs throughout the Christmas season for our milk, hot chocolate, Mission Orange or any other beverage that we might be enjoying. I still have the mugs and they have survived over 55 or more years of seasonal use. My Santa had a small chip on his cheek, so I was always careful to now let it get any worse, and knock on wood, have managed to keep him safe and unharmed for years.

– I was always a sucker for Christmas specials on TV. Of course, the specials were limited to a few variety shows such as Red Skelton or Ed Sullivan, but they were always magical in my eyes. Mom and I would park ourselves on the sofa across from the Crosley B&W TV and enjoy the show together. Even if it was a repeat from previous Christmases, we’d enjoy it as if it was the first time we were seeing it! As a result of modern technology, some of the Christmas sow gems are still around for us to enjoy. Take a few moments are enjoy some of the vintage shows below. You’ll feel as if you’ve been wisped back in time!

– One of my favorite Christmas songs is “Silver Bells.” Whenever I hear it, I immediately

think of Duquesne. As they sing “It’s Christmastime in the city,” I think about the countless strands of multicolored lights that spanned across Grant Avenue, North 1st Street and South 2nd Street. The strands of lights either had a wreath-like circle of lights in the middle or a set of brightly lit and blinking red bells. City Hall always boasted a huge tree to the left of the Fire Department doors, and the entire building was trimmed in multicolored lights as well. I remember Christmas music and bells being played from large speakers that were positioned near the tree. After a Christmas snow, the music became that much more enjoyable as the sound took on a serene, soft and comforting tone.

– A special treat during the holidays was a shopping trip to McKeesport with my mom and Aunt Mary. As a child, my favorite places to shop were either H.L.Greens or G.C.Murphys for obvious reasons. I remember how warm and inviting each of the stores felt after walking several blocks in the freezing weather. The windows were always sweating due to the warmth of the interior and the lights were always so bright and welcoming versus the gray-toned snowy skies above.

– After Mom received a portable stereo from my dad in the early 60’s, we began collecting a

new Christmas album each year that was available at Firestone Tire Stores. I think they were only a few dollars at the time. The albums featured different vocalists each year, but always were packed full of Christmas songs and carols that we’d play over and over again. Those albums became a very important part of Christmas for me, and I still drag them out every year and enjoy the memories they evoke. 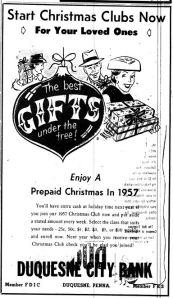 – Although I have written about it before, I still think one of the most vivid memories of Christmas that I have is the excitement that I felt when I received my Christmas Club check from the Duquesne City Bank. After Mom deposited 25¢ each week, both my brother and I would receive our checks for $12.50 to begin our Christmas shopping. To me, this was an ENORMOUS amount of money and opened up countless opportunities to be able to purchase the PERFECT gift for Mom, Dad and Steve. Unlike our government, I was able to come in on budget with no deficit!

These are but a few of the special pieces that comprise my Christmas memories. There are dozens and dozens of others, all of which come together to create that warm and comforting feeling of the holidays. The simplicity of the times and the honesty of the spirit of the season will probably never be seen or felt again. That in itself is sad. However, it is with sincere and heartfelt honesty that I extend to all of you, BEST WISHES for a fantastic and memorable Christmas for all of you, my friends and neighbors. MERRY CHRISTMAS!

32 Responses to Recollections of a Little Hunky’s Christmas