I love the internet. It provides a wealth of information if you know where to look. One of my favorite reference sites is Wikipedia. The information submitted to this site is at times questionable, however, I was able to locate a relatively complete timeline of the many attractions at Kennywood Park since 1898 to the present day. As I read through the information, I was astounded by the age of some of the attractions and the fact that not only do they continue to operate, but that they remain popular attractions to this day!

Be sure to comment on your favorites! I am sure that you have some wonderful stories to relate. Don’t be shy, be a kid again!

Isn’t it amazing to think that for 111 years, the Old Mill has been operating in its same location? I wonder how many first kisses have occurred in the darkened canals within the ride? The Old Mill opened as “Fairyland Floats” but was rethemed 5 years later in 1906 as “The Old Mill.”

It appears that the carousel referred to above was the second of three carousels that were part of the Kennywood landscape. It was eventually replaced inh 1927 by the current merry-go-round.

Do you believe it?!?! One of my favorite coasters has been operating for 92 YEARS!! Even though I know the infamous double dip is coming up, it still is such a thrill, especially if you’re fortunate to be occupying the last seat on the train! During one family trip, my mother-in-law, Jean, decided to take my youngest daughter Abby on both of their first rides on the Jack Rabbit. The good intentions didn’t turn out so well, my daughter “was not amused!” She rolled into the station with a “deer in headlights” look on her face and promptly began lecturing my wife and I for allowing her to ride. Eventually we were forgiven and she road it once agin.

Again, its heard to believe that Kennywood’s swimming pool opened 87 years ago. Although our beloved pool met its demise 39 years ago, I for one will never forget it. The article below details some of the specifics about the days leading up to the official opening in May, 1925. 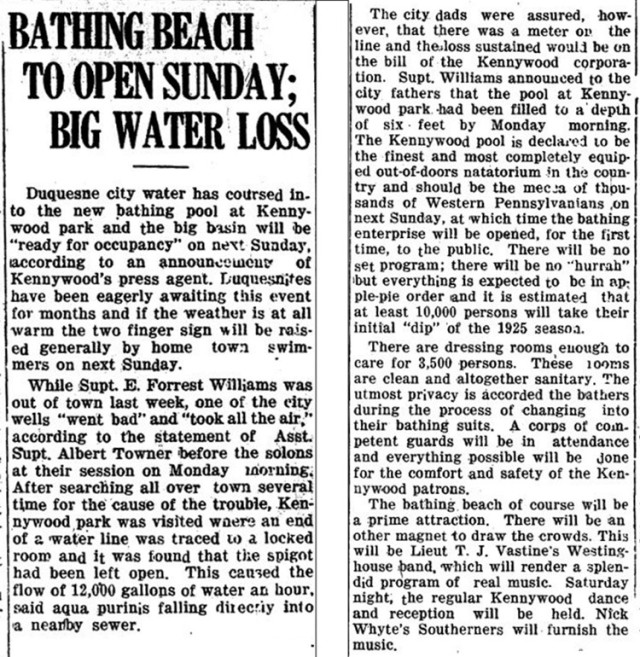 Laff in the Dark was one ride that always freaked me out as a kid. I don’t think it was the ride itself as much as Laffin’ Sal who stood in the ticket booth. I still recall dreams of her chasing me through the park at night! 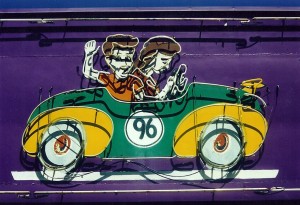 The Auto Race is still in operation and is still enjoyed by thousands each day. I love the ride and can’t wait until my grandson is old enough for me to take him on the ride!

One of the grand old rides and a landmark of Kennywood!

I LOVED the Rotor. I’m sure I couldn’t handle it today, but I remember turning upside down and having a great time on this ride.

I remember the distinctive clacking sound of the gas engines when the ride first opened. The smell of all the exhaust fumes had to have been a problem for the poor kids who operated the ride!

This entry was posted in Kennywood. Bookmark the permalink.