The Streets of Duquesne and McKeesport at Christmas Time

“Take a look in the Five and Ten 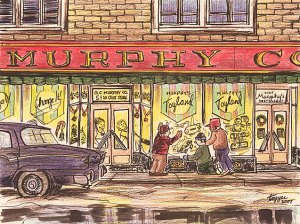 As a kid, there was no other store that made me more excited about Christmas than the 5 & 10 Cent stores! We were so lucky to have three stores to choose from in our area. We not only had the G.C.Murphy on South First Street in Duquesne, but we also had two gems in McKeesport. G.C. Murphy and H.L. Greens were both located on 5th Avenue and were epicenters for Christmas spirit in the city. Although I remember bits and pieces of the Murphy’s on South First in Duquesne, my strongest recollections are with the two Five and Dimes in McKeesport.

We would spend hours at the 5 & 10 at Christmas time. It always felt so warm inside. The store windows had bright and festive displays which were difficult to see sometimes since they always seemed to quickly fog-up when it was sold outside. That was actually part of the charm of the store.

I don’t remember any front checkout lines as you see today. Each counter had its own cash register and its own attentive sales staff. I remember being under the scrutiny of many a salesgirl (as they were called) to be sure I didn’t mess-up the counter. They were fastidious about keeping their counters neat and orderly. I recall the year I was buying my mom some nice hankies. I must have been about 9 or 10 years old and was checking out the prices and the assortment at the counter in H.L.Green’s. The lady behind the counter 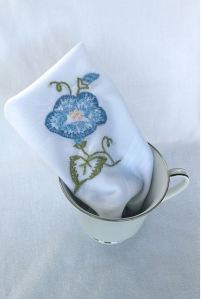 immediately made her way over to me when she saw me reaching for the neat pile of folded hankies. I was greeted with a rather stern sounding “May I help you young man?” In retrospect, she obviously thought of herself as the “Hankie Gestapo of H.L.Green’s.” Needless to say, my arms immediately retreated to my sides, and I told her I wanted to buy some pretty handkerchiefs for my mom. She asked me a series of questions about my mom’s favorite colors, flowers, etc. and determined the perfect choice for me. She was right on, I knew Mom would love the hankies with the blue Morning Glories embroidered on them. For a mere 50¢ each, I was able to purchase 3 hankies for my mom, have them loving wrapped in tissue paper and place in a box. The salesgirl told me the total was $1.50 which she punched into the cash register; I paid and was quickly on my way. 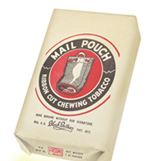 deal with a salesgirl. It meant a quick trip to any number of places that sold tobacco products. I remember going up to the counter in Elise’s (aka Avenue News) or perhaps Hilltop Dairy and buying my dad some Mail Pouch Tobacco and some rolling papers. He obviously used to roll his own cigarettes. In those days, there were no laws that restricted the sale of tobacco products to kids. The messages regarding the health risks as well as using rolling papers for anything other than creating cheaper cigarettes was unheard of.

It appears I’ve gotten a bit off of subject with buying my dad’s gift, so let’s get back to the 5 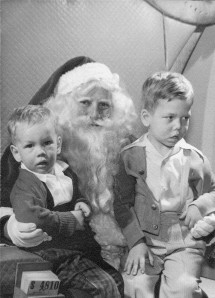 & 10. There’s a part of my Christmas visits to Murphy’s or Green’s that I don’t have a strong recall of. Based on what my Aunt Mary told me, she and my mom would take us to McKeesport to have our pictures taken with Santa at one of the 5 & 10s. It must not have been too traumatic of an event for me since I really don’t remember every doing it. It may have been that my big brother was always in the pictures with me, so I must have felt safe. Or, Santa may have promise to share a cookie or something with me if I took the picture. Whatever the reason was, I still enjoy looking at those old pictures with Santa and I cherish the memories they evoke.

I decided that I need to conduct another poll among yunz! (Yes, I said it…. YUNZ!) I am curious about your favorite Christmas carol/song. I’m asking that you pick two, the first being your favorite religious/traditional selection and the second being your favorite non-religious/popular choice. My favorite religious carol would be “O Holy Night.” My favorite non-religious song and my reason for discussing it in the middle of this post is because the song is “Silver Bells,” and it has a LOT to do with the subject of this post.

In the air there’s a feeling of Christmas

It’s Christmas time in the city

Ring a ling hear them sing

Soon it will be Christmas day

Blink a bright red and green

As the shoppers rush home with their treasures

This is Santa’s big scene

And above all this bustle you’ll hear

It’s Christmas time in the city

Soon it will be Christmas day.

Every time I hear this song, it reminds of those times when I was in downtown McKeesport, shopping with my mom and flitting between the 5 & 10’s. When we were shopping in downtown McKeesport, there was so much positive energy and holiday spirit. The bags that people carried were emblazoned with the store’s name on them. They weren’t generic white plastic bags, but rather proudly displayed the store logo like Jaison’s, Katzman’s, Cox’s, Immel’s, Kadar’s, National Record Mart and more.

I recall one time that instead of my mom, my dad took me to McKeesport one evening. I experienced McKeesport from a whole different perspective during that trip. As busy and exciting as the stores and the city were during the daytime hours, everything turned magical in my eyes that evening. Lights sparkled everywhere, store windows seemed so much brighter and the hustle and bustle was so much more pronounced than during the day. I remember that it was VERY cold the evening my dad and I shopped. In fact, there were  whisps of snow flurries in the air. We literally were immursed in the lyrics of the song “Silver Bells.” From that evening forward, my dad and I made an annual evening shopping trip to McKeesport every year until it no longer was possible due to the economics of the downtown McKeesport area.

I remember how some store, like Cox’s, NRM and Jaison’s played Christmas carols that could be heard from the street, as if they were luring you into their stores. Once inside, you were enveloped in Christmas spirit and customer service. In those days, very few departments were self-serve. People actually worked in specific departments. They did just spend their time stocking shelves and racks, they actually helped you find what you were looking for. You didn’t have to carry around your selection and hunt for a place to pay for it, nor did you put your selection into a grocery cart and have to push it to a checkout line where they would ultimately wad it up and stuff it into a plastic bag directly underneath the loaf of bread you were buying. Instead, price tags were removed from items that were then lovingly folded, placed in a box if you desired and then carefully placed into a bag.

Downtown Duquesne and McKeesport are vastly different from when I was a child. The stores are gone, even the buildings have disappeared. However, the single thing that can never be taken away are the warm memories that are forever etched in your mind.

Now, take a few minutes and tell us your favorite carols. It’ll only take you a few minutes. By the way, I didn’t include “The 12 Days of Christmas” as one of the choices since I have never met anyone who ever liked the song…. or fruitcake for that matter!!

This entry was posted in Christmas Memories, McKeesport, Stores and Businesses. Bookmark the permalink.