When I was seventeen

It was a very good year

It was a very good year for small town girls 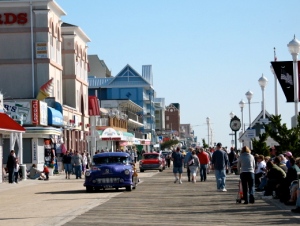 I am fortunate to live in an area that is only minutes from Ocean City, MD. As a result, after Memorial Day and throughout the summer, the number of visitors to our area swells to huge proportions. To accommodate the weekly throngs of beach-goers, the number of summer jobs for teenagers increases correspondingly. Restaurants, retail stores, amusement attractions, and lodging businesses are always vying for employees for the season. With the state of the economy, not all areas of the country hire as many summer workers, so for some kids, there are “slim pickin’s” when it comes to opportunities.

When I turned 15 and was old enough to get a “real” job, I hopped on the opportunity very quickly. At that age, nothing was more satisfying than to be able to have spending money that was mine alone. My dad was rather laid back, so no matter what I earned, he never would require me to save a certain amount or to contribute any portion of my earnings for food, etc. So, throughout my “summer job” years, I managed to enjoy every penny I earned.

Summer jobs abounded in Duquesne when I was a teen due to many factors. First of all, 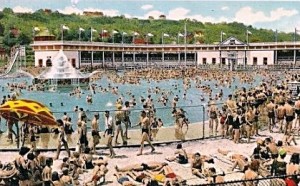 Kennywood offered a wealth of opportunities. So many of my friends earned their spending money each summer by operating rides; working the concession stands; prowling the grounds as a human “litter gitter,” poking stray pieces of discarded paper; or perhaps working in the steamy environment of one of the restaurant’s kitchens. There were always a handful of lucky kids who managed to get a position at the swimming pool and were able to enjoy all the “perks” that came along with that job.

A lot of guys went to work in the mills during the summer. During the 60’s and 70’s, steel workers with 10 or more years of experience were entitled to 13 weeks of vacation every 5 years. I remember all of my uncles looking forward to those vacation days and every one of my aunts dreading their approach. Between those extended vacation periods and other earned vacation weeks, an aggressive and hardworking young man could land a

well-paying temporary job during the summer in the mills. I believe you had to be 18 years or older, so I never was able to work there. Besides, I really didn’t do “aggressive and hardworking” around that age!

Summer jobs with the City of Duquesne escalated in the summer as well. Not only due to vacation of city workers, but due to special projects that may have been planned for the summer or in order to staff the many city parks and playgrounds. During this time, Allegheny County as well as the State, hired extra people. To land one of those jobs, lots of dads had to pull in some extra favors from friends in order to get their teen hired. 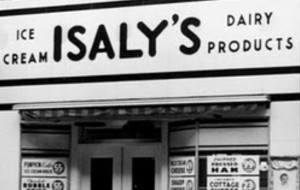 Beyond the big summer employers, there were dozens and dozens of places my friends got jobs, from Duquesne Printing Co., to Schink’s, Levine’s, Irene’s and Krogers. The Dairy Queen always hired for the summer as did the many Mom and Pop stores in town and in every little neighborhood.

My personal litany of summer jobs included stints at Kopriver’s Florist, Eastland Car Wash, David Israel Men’s Clothing in McKeesport (I lasted only a month there), and my shortest period of employment at some florist on Walnut Street in McKeesport where I quit after 1 hour! 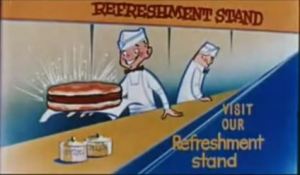 My all-time favorite summer job was working for my Aunt Clare at South Hills Drive-In Theater. It was located right off of Rt. 51 on North Lewis Run Road in Pleasant Hills/West Mifflin. Nepotism was alive and well at the Concession Stand! My cousins Cheryl, Tom, Etta and Jerry all worked there. They were all my Aunt Clare’s children. In addition, some of their neighbors and friends worked there as well, including Marianne, Tom’s future wife!

There’s a popular film genre described as “Coming of Age Movies.” This is a category of films that portray coming of age themes. It also includes rite of passage themes involving young and adolescent characters. St. Elmo’s Fire, To Sir With Love, Blackboard Jungle, and American Graffiti are but a few examples of the 325+ films that represent this category.

As I began thinking about my job at South Hills Drive-in during the summer of ‘68, I began to realize what a special time it was. I believe everyone has a special summer in their youth that they will always remember as the “best summer EVER!” It could be because you had that “certain” summer job, that “certain” girlfriend or boyfriend, that “certain” vacation, or perhaps that “certain” special event in your life. Whatever the catalyst that made it unforgettable, each time you allow yourself to sit back and think about it, a smile comes to your face. If they were to produce a “coming of age” movie about that period of time in our lives, it would be aptly named “That Certain Summer!”

To me, when I worked at the drive-in, it was like a “perfect storm,” an event where a rare combination of circumstances produced the idyllic situation. From the very first day “on the job,” I was in the company of family and friends. My “boss” was my Godmother as well as my aunt! We worked in an environment that was so much fun, yet everyone knew their job and did it well.

When I was working at the drive-in, my dad would allow me take his car to my aunt’s house since:

a) I would be returning that evening after work and he would have his car to go to work in the morning, but must importantly,

b) He was close enough to the Croatian Club and the GBU to be able to spend some time with his buddies.

Our work day would usually begin around 5 or 6 p.m. at the concession stand, but the fun began as soon as we pulled out of Aunt Clare’s driveway. She always had an affinity for cool cars. She once had a VW Beetle. Of course, it was bright yellow (I think) and she had it decorated with all of the big flower decals that were the rage in the 60’s. She also

once owned a bright orange Karmann Ghia convertible that was SO much fun to ride in. However the “coup de grâce,” the most outstanding car that helped to make the summer “that certain summer” was when she bought a brand new bright green Pontiac GTO convertible with a white ragtop and a white leather interior. It was of course, fully loaded and included an 8 Track player! I usually took a seat in the back along with my cousin Etta. My cousin Tommy would be at the wheel and Aunt Clare would be riding “shotgun.” Each evening, we’d cruise along Lebanon Church Road toward South Hills Drive-In with the Beach Boys or Tommy James and the Shondells 8-track tape blasting and all of us singing along.

When we would finally arrive at the theater, like a well-oiled machine, we all went about our assigned duties, grilling hot dogs and burgers, making hoagies, prepping pizzas, 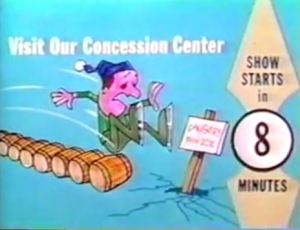 popcorn-duty, etc. As sweet as Aunt Clare was, she managed to keep us very focused, didn’t “put up with nonsense” and therefore, we always were set-up by the time the movie goers arrived. Depending on the feature being shown, our normal “first wave” of customers would usually be excited children in their pj’s with moms and dads in tow. From that point until the show began, we’d have a steady stream of customers grabbing up all of the goodies. With my two cousins Etta and Cheryl manning the registers, people moved through the lines very quickly. Once we managed to get through the initial onslaught of people, things were very quiet until intermission hit. That’s when all hell broke loose and we were like Walmart on the day after Thanksgiving! In spite of the demands of the job, the clean-up and the occasional complaining customers, we all had a GREAT time.

Once we finished for the evening, which was normally between 1 and 2 a.m., we would pile into the GTO, drop the top, and once again cruise back to my aunt’s house. Our evening wouldn’t always end there however. Occasionally, with my aunt’s blessing, we would all change into bathing suits and jump into their pool. It was an above ground pool at that time and served as a giant oasis after a long night at the drive-in. We’d splash around for an hour or so, OR, until the neighbors complained. Whichever came first!

Occasionally, instead of swimming, we would make late night runs to West Homestead and to a bakery that supplied donuts to various stores. For the life of me, I cannot remember the name of the place, but think it might have been something like “Sunrise” or “Dawn” or something relating to the early morning. The sugar donuts were like “food for the gods!” We would buy a dozen or two and begin eating them before we left the building. Between the 3 or 4 of us who would usually go, we would have downed the entire lot before we reached home. Since I still had my Junior License, I would very carefully drive my dad’s car back home to Thomas Street at the end of the evening and then sleep in until AT LEAST noon to begin my day again. What a great summer.

My job, as wonderful as it was, did not define my “Certain Summer” in its entirety. I did have days off and down time that added another level of excitement and memories to that period. In a previous posting, I mentioned how I used to hang out at Nancy Staisey’s 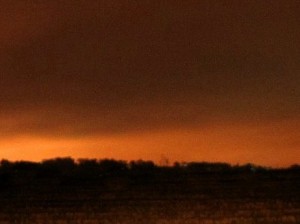 house on Overland Ave. It was during my “Certain Summer” that all of this transpired. I remember spending a lot of time on her side porch and just enjoying Nancy’s company and the company of other friends who showed up. For munchies, we’d make trips to the Dairy Queen, to Kennywood or to Palchak’s. KQV would be tuned in on the radio, cars would be driving by on their way to or from Kennywood, the familiar orange glow from the mills would light up the sky, and all would be right with the world.

A huge part of that summer was the love affair we all had with Kennywood. Between the swimming pool, the Starlite Theater, and the park itself, countless hours and days of my summer were spent there. Not a moment would pass before I’d be bumping into one of my friends. Because of my summer job at the drive-in, I was able to ride the rides, buy the food and pay for pool admission easily, not only for myself, but for my date as well. Things were just wonderful.

That was the essence of MY “Certain Summer.” Nothing monumental or world changing occurred. As individual occurrences, these events might seem trivial. However, let me assure you, relating them to as I have just done has brought the biggest smile to my face.

“Those were the days my friend

We’d sing and dance forever and a day

We’d live the life we choose

For we were young and sure to have our way.

In closing, I think it would be great if all of my readers, the Duquesne Clan, would share the story of your “Certain Summer.” I guarantee you, once you begin writing about it, you’ll do so with the biggest and warmest smile on your face! Don’t hesitate, go for it and share your happy times with us.

This entry was posted in Food and Restaurants, Kennywood, Life in General, Stores and Businesses, Summertime. Bookmark the permalink.

11 Responses to That Certain Summer