I was driving through my neighborhood on the way to the office today and made an interesting observation. Ocean Pines, MD is a community that rests about 5 miles from Ocean City, MD. As a result, every summer, our tranquil community turns into an area

flooded with vacationers and beach goers. Along every street, you can find many joggers, walkers and cyclists, all suitably outfitted in every conceivable piece of protective gear available. Joggers and walkers wear reflective vests for any pre-dawn or post-dusk workouts. In-line skaters are equipped with helmets, knee pads, elbow pads and reflective gear as well. Then, there are the cyclists, especially the little children who are riding along with their parents. No matter the temperature, the kids have helmets, knee pads, elbow pads, padded shorts and every other safety device ever produced. I am sure you all remember the ridiculously constrictive event that we all had when Mom dressed us up for sled riding or outdoor winter play. News flash, it is now a summer experience as well!

By no means am I suggesting any relaxation or constraint when it comes to a child’s safety. More is better, so carry on! However, I think back to the time when most of us were growing up and the idea of a bike helmet hadn’t even been conceived yet. I am somewhat surprised that my friends or I didn’t suffer any major injuries considering how much time we spent on our bikes. There weren’t many two-car families in those days. In fact, I don’t think any of my friend’s moms even had their driver’s license. My mom never had one. Dad’s used to take their car to work each day, and Mom and the kids were left at home to fend for themselves in the event they needed to get somewhere. For the moms, there was always the bus or perhaps a neighbor who drove  and who happened to be home. For us kids, our options were to either walk or ride our bikes. Needless to say, the bike was always the preferred choice.

My bike was not a new bike. My dad had either made a trade with someone, bought it second-hand or was given it by a friend. Whatever the circumstances, I was so happy to

finally get my own bike. I remember the very day it happened. I was at my dad’s auto repair station on South First Street. The garage sat across from Holy Name Rectory at the corner of First and Kennedy. My dad told me to come with him to the back of his building, and he opened the rear overhead door and THERE IT WAS!!! Framed against the backdrop of the Duquesne Mills on a HOT, HOT, HOT summer day, stood my bike!! I was as happy as a pig in poop!

My dad, being a master with a spray gun, had taken what was a rusty beat-up two-wheeler, and turned it into a sleek, clean rust colored bike. Yep, rust colored. I asked him in later years why he had chosen “rust” as the color, and he informed me that he thought if the previous rust spots began to show through as time wore on, I wouldn’t notice. (Nice try Dad, but I did notice!) The other distinctive feature was that unlike other bikes that had shiny chrome plated fenders, MINE were painted……. you guessed it…… rust! However, at that moment in time, I didn’t care. To this 7 year old hunky, it was the most beautiful bike in the world AND it was mine!

Shortly after that memorable day, my bike and I became inseparable. Wherever I went,

he went. (Yes, my bike became personified and was an official pal!) It didn’t matter that if I was only going down three or four houses, my bike went with me. Fortunately, I never had a serious spill off of my bike or got injured in any way. I may have tumble once in a while, but that was about it.

Unfortunately, I can’t say the same for my cousin Karla, who was an occasional passenger on my bike. When I would take her for a ride, it was always on that horizontal bar that boy’s bikes had between the handlebars and the seat. For the many times I had her on my bike, we never had a problem. That is until one day when I was giving her a ride from the top of Martin Street to her house, just two doors down.

The incline on Martin Street didn’t look very ominous when you first saw it. However, on a two wheeler, it was steep enough that a bike would pick up speed quickly if you weren’t

careful. Martin Street was the first street to the left, right after you crossed the Duquesne West Mifflin line, coming from Duquesne on Kennedy Ave. As I began to ride Karla toward her home, apparently her leg moved, and her foot slipped into the spokes of my front wheel. She screamed, I freaked, and we came to a grinding halt. Karla was crying and I began yelling for her parents. O.K., granted, it was a dire situation. A child was hurt and her dad came running to her aid. It was just what one would have expected, except Uncle Lou came running in his “tighty whities!” Apparently, the accident happened at the precise moment that he was changing his clothes, and well, the rest is history. Karla didn’t see the humor in the situation and quite honestly, I was too scared to even think about the awkward scene it must have been. Hard to get that image out of my mind! However, when I think about it now, I can’t help but chuckle.

Sir Winston Churchill once said, “All men make mistakes, but only wise men learn from their mistakes.” I guess I missed that quote in my history lesson since history did repeat itself again with my poor cousin Karla. Although she and I had that horrible incident with my bike, her foot and my Uncle Lou in underwear, we didn’t let it daunt us. In a short amount of time, Karla mustered enough courage and trust in my bike riding abilities, to climb back on my bike and go for a ride. As you might guess, that didn’t work out too well. I had Karla on her usual perch on my bike, and we were heading down Goldstohm Lane. Just around the intersection of Goldstrohm Lane and Kahler Street, I tried to slow my bike down and ended up skidding on some gravel that had collected at the bottom of Kahler. The bike fell over, I fell off, and Karla went face first, skidding into the cinders. I quickly ran over to her and saw that her face was a bloody mess. We weren’t within shouting distance of her home, so I picked her up and carried her in my arms to her home.

Her mom, my aunt Mary, had heard her crying as I was carrying her home and had come running out of the house (fully clothed I might add) and took her from my arms and rushed her into the house. She carefully washed her blood and tear stained face and even pick out a few pieces of gravel that had stuck to her. I don’t remember if she took her to the hospital or not, but I am thinking that she didn’t. One cinder came very close to her eye and just missed penetrating it. God was with her when that happened and spared her from further injury. It took quite a number of weeks for the wounds to heal, but Karla came out of it just fine. I am sure that I had managed to convince myself and Karla that our duo bike rides were over. See Sir Winston, you don’t have to hit me with a 2×4 to learn, just with a handful of gravel!

I thought you might enjoy reading some tidbits from the Duquesne Times. From time to time I’ll be including an article or to for you to enjoy:

In closing, I thought the front page of the August 7, 1958 issue of the Times speaks to how small town and wonderful our hometown was! 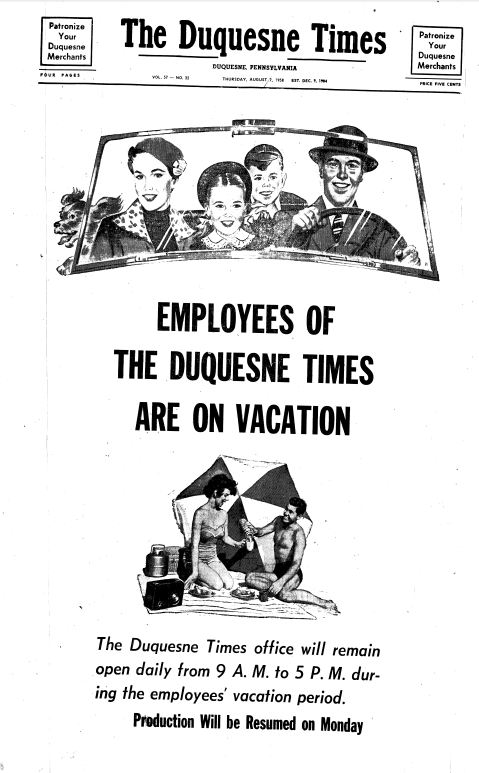 This entry was posted in Life in General, My Hunky Family, Parents, Playing and Games, Summertime. Bookmark the permalink.