Please note: Some of the newspaper articles appear to be small and might be difficult to read. If you encounter that problem, just click on the article, position the magnifying glass over the article and press enter. by doing so, you will be able to increase the magnification and improve the readability. Sorry for the inconvenience. – Jim

I would assume that we all have been watching the media coverage of the spread of the Corona Virus COVIC-19.  I hope that you are taking the recommended precautions to keep yourself safe and well.  However, as I continued to listen to the news of the spread, it reminded me of a Duquesne News article that I had bookmarked a number of years ago. There has never been a more appropriate time or reason to share it with you than now, with the growing worldwide health concerns that we are experiencing.

Did you know that almost 102 years ago, the City of Duquesne suffered from the devastating effects of another global pandemic? Known as the Spanish Flu (H1N1 virus) Pandemic of 1918, the deadliest in history, infected an estimated 500 million people worldwide, about one-third of the planet’s population, and killed an estimated 20 million to 50 million victims, including some 675,000 Americans.

In Duquesne, in a period of just 7 weeks, 266 people lost their lives as a result of influenza. The sickness did not discriminate between the young and old. Older citizens as well as infants and children perished. The wealthy of Duquesne as well as those who barely eked by financially, fell victim to the Spanish Flu.

In this post, I have assembled a number of articles from the Duquesne Times that reported on the horror of the disease and the effects on the residents. The similarities on the timing and spreading of the virus appears to be remarkably comparable to the current timeline and spread of the Coronavirus.

On page 6 of the September 27, 1918 edition of The Duquesne Times, the existence of The Spanish Flu was first mentioned. In a column that published reports and letters from enlisted Duquesne boys battling in World War I, young Earl R Shultz wrote from Orleans, France:

On October 4, 1918, just one week after the report about Earl Shultz’s battle with the Spanish Flu,  the first report of the deadly influenza actually arriving in Duquesne was published. This time the information was front page news, but the article’s diminutive size and downplayed content, didn’t really provide a sense of urgency or concern. 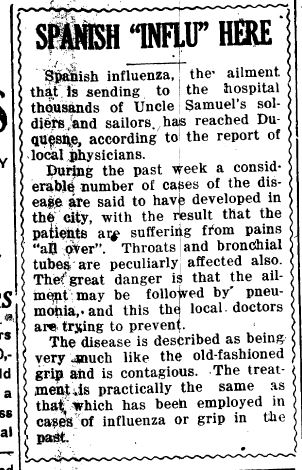 One week after the initial anouncement that the Spanish Flu had arrived in Duquesne, the tone of the news took a dramatic and frightening turn. The suspected cases of the influenza had grown to 274 people in a little over one week, with no signs of relenting.

I found the section of the article titled “Donts For Influ” particularly interesting. The recommendations to guard against the flu were virtually identical to those that the CDC is recommended for the Coronavirus! Common sense prevails 102 years later! The following week’s edition of The Duquesne Times continued to report the dire situation in Duquesne. Buy October 18, 1918, there were 0ver 1200 residents who were sickened by the disease. The front page of the paper contained a proclamation by Mayor James S. Crawford urging people to follow the guideline of the public health officials and were warned to not place any credence in the false reports and rumors about the malady. 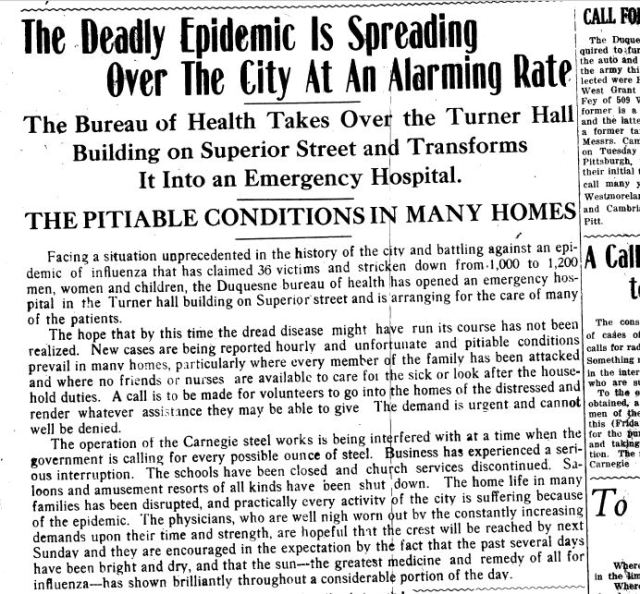 Front page headlines of The Duquesne News announced the toll of the epidemic for the following weeks as the death toll rose and well as providing hope as the number of people contracting the disease began to wane. Coupled with the jubilation felt with the surrender of Germany on November 11, 1918, life was returning to normal  in Duquesne.

Finally, I am posing the published names and ages of victim of the pandemic. I am sure they are not all inclusive, but may answer some of the questions you might have about your ancestors. 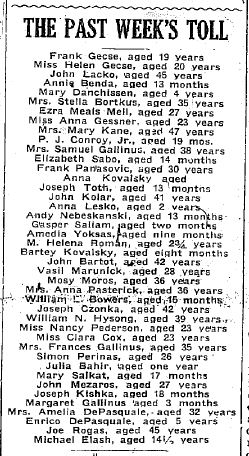 And so, in closing, I wish you all well. Please pay careful attention to the guidelines provided by the CDC and your local authorities. I am so looking forward to hearing from you after our current problem passes.

Be well my friends!