Cold Weather – Warm Memories – Past and Yet To Come

For many of us, the weather over the last two weeks has been a bit “brisk” to say the least. I would imagine that many of you have had to dig out of considerable snowfall amounts and/or battle inhumane, freezing temperatures.

View of our frozen canal!!!!

It’s no different where I live. Here on the Eastern Shore, we have had to content with the same crazy weather. The temperature very early yesterday morning was -5°! That was WITHOUT the wind chill factor. If I just stayed in my house with the fire going and a hot cup of coffee, it wouldn’t have bothered me. However, as my luck would have it, that was the exact time that one of my dogs decided they needed to relieve themselves.

Bravely, I bundled myself up much like our mothers did when we were little. In lieu of the thermals I didn’t own, I kept on my flannel pajama bottoms and pulled my jeans over them. Next came a thick pair of socks that barely allowed me to pull my boots on. I pulled on a turtle neck and then focused on my outerwear. By this time, my poor dog’s eyes and legs were crossed as she looked at me pleadingly.

A few years ago, I attended a Halloween costume party and dressed as Ozzy Osborne. The costume included a very long black leather coat, down lined, that I found at Goodwill for $35.00. When the weather gets crazy cold, only in the dark of night or very early in the morning when everyone in the neighborhood is still sleeping, I’ll venture out of the house wearing that coat which is incredibly warm. I pulled on my Ozzy coat, my black ski mask, my faux fur aviator hat, complete with ear flaps and my insulated gloves and was at last ready to face the cold. I was happy and warm and my dogs were thoroughly relieved! So knowing that both of my daughters would be totally humiliated if they were present, I threw open the door and bravely tackled the skin numbing temperatures.

I know we had similar days in Duquesne when we were young, but I don’t ever recall the temperature being so bone chilling! Perhaps it was because our bones were a lot younger back then and impervious to the frigid temperatures.

This type of weather would have been perfect for creating “ice tracks” in Prune Alley, directly behind Holy Name Church, convent and school. Much to chagrin of the good sisters, the older boys at Holy Name were very adept at building awesome ice tracks that we would “foot ski” along on. We knew the very best incline was from about the middle of the back of the church down to start of the garage that sat behind the convent. Prime space! During freezing temperatures, we’d all toss handfuls of snow onto the track which would be packed down and ultimately ice up under the continuous slide of our shoes over its surface. We were masters of our craft. Quite honestly, I am surprised that ice track sliding never became an Olympic event!

Well, it’s time to warm up a bit. Thanks to one of friends and readers, Eileen TOKAR Lilley, we have some very heartwarming memories and one potential event that would be so much fun. Eileen had sent me some wonderful family pictures to share with all of you, but the perfect opportunity had never risen to do so until now. Seeing them will certainly bring back some very warm memories of being a child in Duquesne and the backyard and neighborhood adventures we used to have. But first, I wanted to share a bit of current news that Eileen wanted to suggest. A few days ago, Eileen sent me the follow message and idea:

I don’t know if you are planning a trip to Duquesne, but I thought what an idea to try to bring some of the “Duquesne Hunky bloggers” together at the tribute dance for TL. If you could include my previous e-mail in your blog to get the word out, that would be great. Maybe they could even set up a reserved table or 2 or 20 for us bloggers. What fun!

I think it would be SO much fun for us to get together for this event. I certainly am going to try to make it back home for this tribute. I hope some of you are able to come as well. If you are interested, please drop me an email at duquesnehunky@gmail.com and let me know. I’ll keep you all updated on the interest level. Considering that on March 8 last year, the low temperature was 29°, it will be great to warm-up together while listening to the TL Sound once again.

Now here’s a special treat for you. Eileen sent some wonderful photos to share with all of you. Fortunately, they were all taken when the weather was warm, bright and sunny, so they’ll instantly remind you of the warmer days to come. She also included captions for each of the pictures. If anyone else has pictures to share, I would love to be the vehicle to do so. You can scan and email them to me or send them to me and I promise to return them if you want me to. Your call. Now, grab a hot cup of coffee or any beverage of your choice and enjoy this little trip back to Duquesne. Location –Orchard Court – Off of Center Street!

Compare this picture to the one you have of the Crawford Mansion and you’ll see the twist in the middle branch of the tree to my right is what’s exactly on the picture. There’s one of the stone columns with the gate which are gone now.

Here’s the other stone column. Our house was the 2nd on the left on both this and the preceding picture. I’m standing on the far right of the front yard. There’s a hill behind me which slopes down to the front yard of the house next to ours. This picture was taken approx. 1952.

(Note from Jim – I superimposed the column that Eileen is referring to onto the picture of the Crawford Mansion. I’m convinced that it was certainly part of Duquesne’s history! Good going Eileen! Take a look for yourself.) 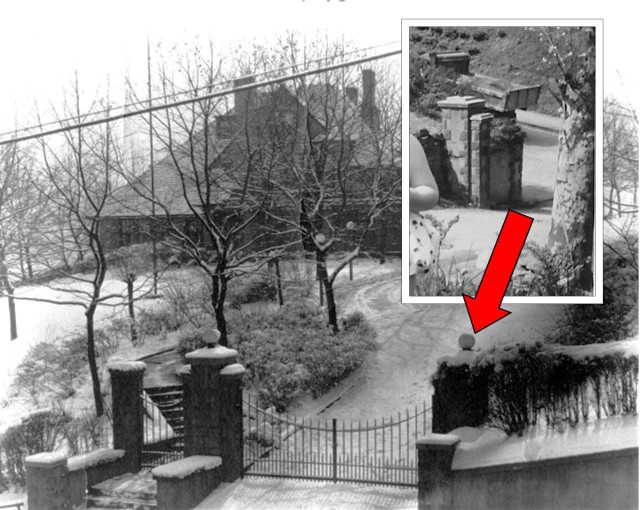 (Note from Jim: To gain the perspective of where the majority of Eileen’s photos were taken, I pulled up a Google map to illustrate:)

The next three pictures are called “Steeltown Cowgirl.” You can see the mill in the background of #6. #7 is me standing on the edge of the middle of my front yard with the street behind me and seeing the house across the street. I’m facing our house. The last picture was taken in Kennywood to the left as you first walked in to Kiddieland. (Note from Jim – The pony doesn’t seem to be too thrilled with his “profession! Also, notice the politically incorrect little guy in the front yard in the 2nd picture. Times were so much more innocent then. ) 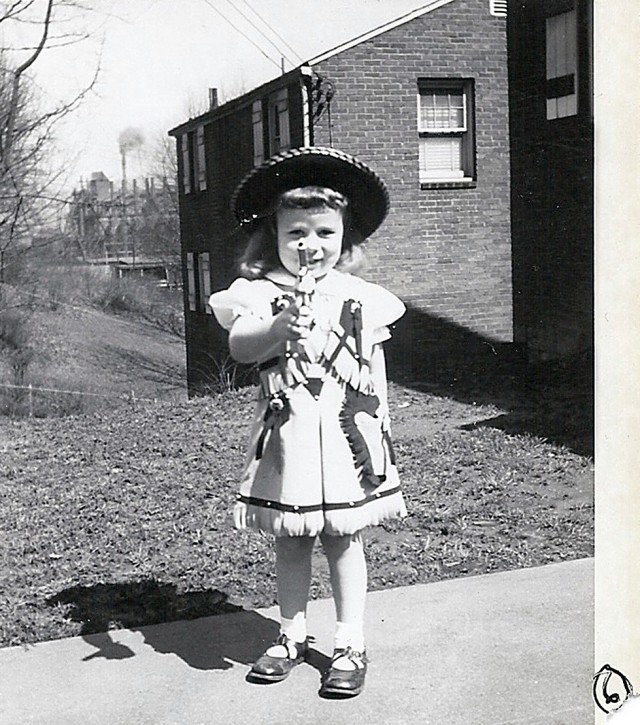 I’m on the right. The girl on the left lived in the first house on the opposite side of the street, but only for a short time. I don’t remember her name. (Does anyone know her?) AT the far left is a wall that stops before the swimming pool. Could it have possibly been part of the Crawford’s Mansion or grounds? 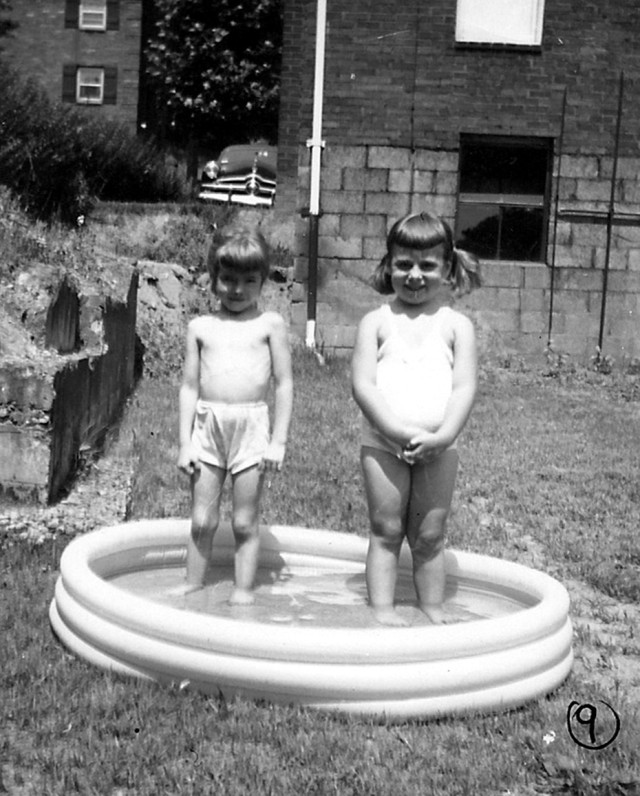 This caption should read “I hope someone is watching us or we are going to roll down the hill to Kennywood!” This was taken at my Grandma’s house in West Mifflin on Glencairn, the street going up the hill out of the old back gate off of the parking lot at Kennywood. You can see part of the bathouse of the Kennywood swimming pool in the background. Can you imagine the view we had of the fireworks? This taken in 1950.

This is a photo of me standing in our front yard, ready for church. This was before the trees were cut down. My dad painted something on the tree to prevent disease, but their real killer was the utility company who had them all cut down. 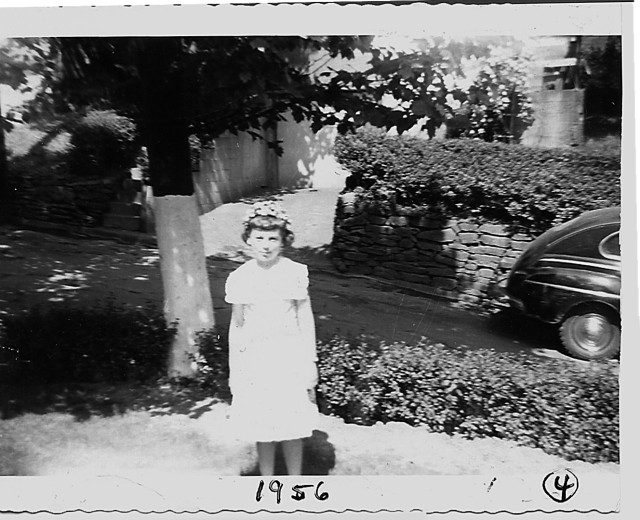 For this picture, my dad was standing in our neighbor’s front yard to take it. Notice the wall is the same as the ones across the street and again, could have been part of the Crawford Mansion. 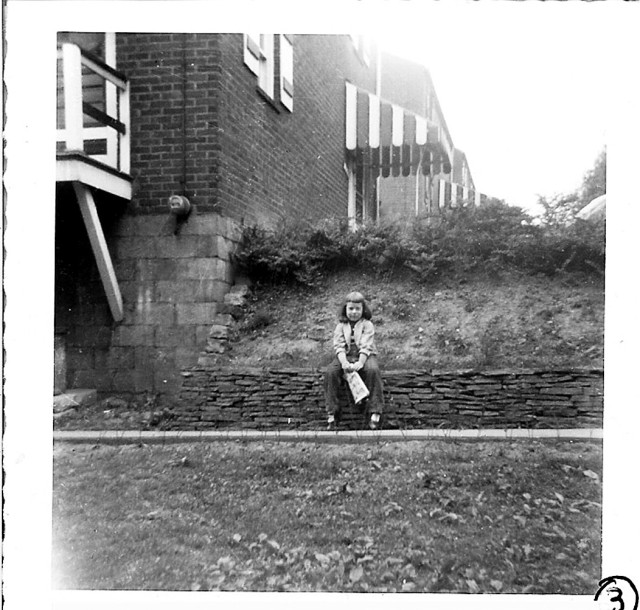 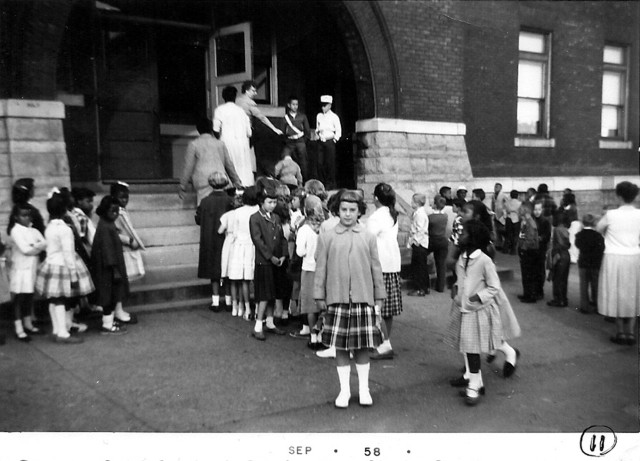 Don’t forget to think about the TL Tribute Dance in March!!

I thought I’d close this post with two screen shots of Center Street as it is today. Still as awesome as it was when we were kids.