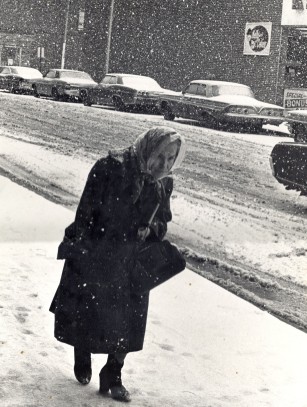 In May of this year, I posted a picture of an older woman walking along the sidewalk in McKeesport on a snowy day. The post, titled “A Bubba In McKeesport” brought back a lot of memories for all of you, as you each recalled your own special grandmothers.

The reason that I had posted the photograph,  was to help identify the woman in the picture. I had no idea who the special lady was when I snapped the picture back in 1970. I was waiting at the bus stop in front of the Famous Department Store on 5th Avenue, across from the Kelly & Cohen Store. The photo was part of an assignment that I was given in my photography class, and was just a random shot of a little old lady.

Years later, I began to wonder who she might be. She appeared to be the perfect little Bubba with the most determined look on her face. I am thrilled to say, that after posting her picture, someone has stepped forward and identified the lady as their own Bubba!

About a month ago, I received the following emails:

“I saw the picture you posted on your blog of the McKeesport bubba. That lady is my mother. I am so surprised to see this. My mother’s name is Teresa Lischak James. She passed away in 1988.” – Delores Smay

“My aunt somehow found your blog and we believe that the picture of the Bubba is actually my great grandmother! My grandmother is sure it was her mother. Her name was Theresa Lischak James and I still remember her. She was full of spunk and life! “ – Kristen Lynch

“I think Grandma was born in 1902, but my mother would know for sure. So she would have been 68. People used to look older at that age than they do now. I just think it’s crazy that my sister came across that. I didn’t talk to her myself to ask her how that came about, but I plan to tomorrow. My grandma was always determined, on a mission, and she wouldn’t let a snowstorm slow her down!” – Kristen Lynch

I have since reached out to Mrs. James’ family to try to learn more about her. I will enjoy being able to share more about this grand little lady, and adopt her as our official Bubba of this blog! Hopefully, I will soon being receiving information about her. As soon as I hear from the family of Mrs. James, I will share their recollections with you. 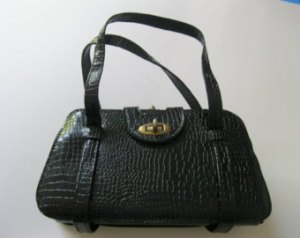 When I looked at her picture once again, I was taken by how tightly she seemed to be clutching her purse. Of course, in grandma lingo, it would be called a “pocketbook,” and no matter what little grandma was carrying it, they all looked the same. A little black bag with short straps, rigid leather or cloth exterior, with a gold frame closure at the top. The interior probably had two compartments plus to smaller pockets on each side.

The simplicity of Bubba’s pocketbook contrasted dramatically with the huge handbags available today. My daughter Abby is a handbag junkie. She collects handbags like other people collect coins, stamps or baseball cards. The bigger the better, the more colorful the better, and the bling the better. In the case of her handbags, size DOES matter. Short of the kitchen sink, ladies today carry items in their handbags that our bubbas would never have  dream of; makeup, cell phone, keys, wallet, coupons, iPads or notebooks, credit card cases, wallets, coin purses and assorted sundries that they “cannot survive without.”

I remember sitting beside grandmothers and elderly family members as a child and watching as they opened their pocketbooks for one reason or another. Each pocketbook always seemed to be armed with standard Bubba equipment including:

A Rosary, usually lovingly tucked inside a small gold or silver case. The beads were 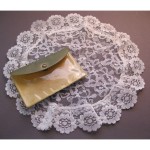 A Chapel Veil was standard fare for every bubba. She would often take off her babushka before she entered the church and place her chapel veil on the crown of her head with bobby pins securing each side. Black was the color of choice, although white would occasionally be worn for special occasions.

A Babushka was always neatly folded in every pocketbook. Grandmas were always prepared for any inclement weather that could come their way. Babushkas were most often multi-colored and brightly pattered so they would “compliment” and outfit Bubba was wearing (although it was probably black.)

bonnet was always clear and would often be worn over a babushka or chapel veil if there was even a hint of rain in the forecast. I remember that they would shake the water out of the bonnets and then snap the pleats back into precise order by pulling on the ends of the cap. Of course, the bonnets also had their proper place, tucked inside a small rectangular container for safekeeping.

A Pair of Gloves were always at hand (if you pardon the pun) inside every well respected bubba’s pocketbook. White cotton for Spring and Summer, and black leather for Autumn and Winter. One must always be prepared to be a lady you know.

A Change Purse held all of the loose coins that Bubba would carry with her. Often it would also contain bus tokens for her trips to McKeesport or Pittsburgh. I recall standing behind many a grandma making a purchase at a store and watching her clutch her change purse in one hand and counting out the coins one by one for the clerk. Paper currency wasn’t usually carried in the change purse, but would be neatly folded into one of the zippered interior pockets of the pocketbook for extra security and safe keeping. 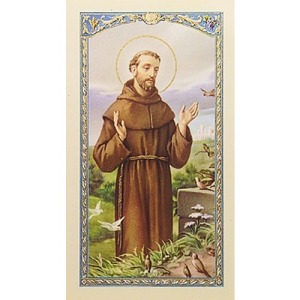 very special satchel. Often, the cards were special remembrances from the funeral of a deceased family member or friend. There may have been a very specific holy card that not only contained a portrait of a particular Saint, but also included a special intention prayer to that Saint. St. Jude, St. Francis of Assisi, St. Maria Goretti and St. Bernadette Soubirous of Lourdes, as well as Our Blessed Mother and The Infant Jesus of Prague were the most popular and beloved by Bubbas everywhere.

A Hallmark Datebook that Bubba had picked-up for free at a card store was always handy in their pocketbook. It was used most often to note family members birthdays and anniversaries as well as special occasions such as a grandchild’s upcoming First Holy Communion or wedding.

A Hand Sharpened Nub of a Pencil could always be found at the bottom of her pocketbook as well as a small notepad. The notepad was usually imprinted with a local bank’s logo, or perhaps Bubba splurged and bought a small spiral notepad if she was feeling frivolous one day! 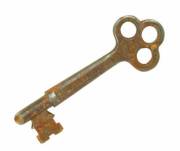 A Skeleton House Key would be safely tucked into the pocketbook. Most homes used the same type of lock, and skeleton keys would basically open any lock in the city. Despite the fact that you could buy skeleton keys at Schink’s, Levine Bros. and any other hardware store in town, break-ins and robberies were a rarity!

A Pack of Tissues or Handkerchief rounded out the standard contents of Bubba’s pocketbook. It was always import to have them handy to stifle a sneeze, wipe a tear or just clutch in her hand or stuff up her sweater sleeve for safe keeping and quick use.

What a wonderful time of year to conjure up memories of your own Bubba. As we head into the holidays, remember the sounds and the smells emanating from your grandma’s kitchen as she busily prepared to cater a magnificent Thanksgiving dinner for her entire family. Think about how she would spend days and days preparing pumpkin pies, pecan pies and those very special poppyseed or nut rolls. I’m sure God reserved a very special place in heaven for all of the bubbas who were part of our lives.

My Darling Bubba, we will forever hold in our hearts 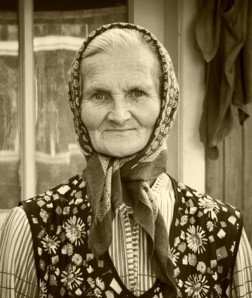 Your strength as a wonderful mother to our mothers and fathers,

Which we hope to gain while raising your great grandsons and great granddaughters.

As you look down from heaven above,

Know that you are always, remembered with love.

And when we are called and leave this place

We will once again be in your warm embrace.

This entry was posted in Life in General, McKeesport, My Hunky Family. Bookmark the permalink.