I am fortunate to be the father of two wonderful daughters. They have both grown up to be spectacular women and I couldn’t be prouder. I enjoyed every aspect of their childhood and look back on their childhood adventures with great fondness. Both Megan and Abby were outstanding students, involved in our church, avid sports team members, and passionate dance students. Both girls took years of dance lessons ranging from ballet to flamenco dancing. They attended dance lessons in local dance studios in the areas we lived in, and every Spring, took part in the dance school recitals.

I believe that in America, it has become a rite of passage for young ladies and sometimes, 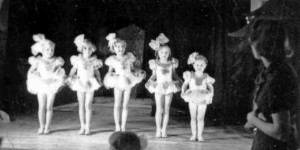 young men, to be enrolled in dance classes. The Duquesne of my youth was no different. I remember attending dance recitals when my cousin Karla took lessons at “Pat’s Dance Studio” in Duquesne Place. They were held at the library, and there was always an air of excitment and a “Broadway” type feeling in the theatre on the night of the event.

I dug through some issues of the Duquesne Times and discovered that two sisters owned a dance studio in Duquesne called The McWilliams Sister’s School of Dance. Claudia Repko Misage, once posted a comment about these  sisters, so I know they are familiar to some of you. Cassie and Ann McWilliams started their School of Dance in 1936, and their very first “Danceland Review” took place at the Duquesne Library in June, 1937.

For your enjoyment, I am posting two different articles from The Duquesne Times regarding the McWilliams sisters. The first was published in 1937, and announces the very first of their annual Danceland Reviews that featured their students. The second article outlines the progam and participants from their 1952 production of the Danceland Review, held 60 years ago. I am sure you will recognize many of the student’s names and for most of you who were participants, I’m sure a smile will lighten you face.  My apologies to any of the guys out there who had hoped their dance review days were long forgotten. However, with the popularity of programs such as Dancing With The Stars, there’s an entirely new found admiration for the dancer in all of us. 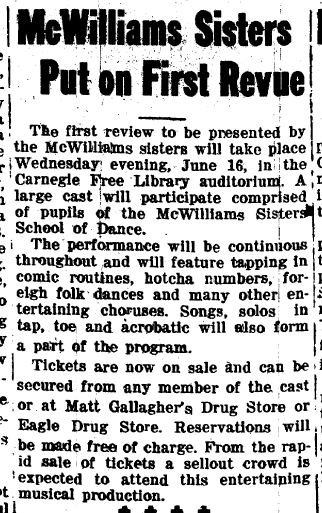 I never saw any of the productions of Danceland Review when I was growing up. The dance recitals I remember were presented at the Carnegie Library by the students of “Pat’s School of Dance,” which was located on Kennywood Blvd in Duquesne Place. I remember both my cousin Paula and Karla Goldman attended the school, and I often went with my Aunt Mary as she observed the classes in session.

The school’s owner was a Duquesne High School 1961 graduate, Pat Kelleher. Pat later married and became Pat Dynoske. She operated the school for 43 and stepped down in 2003. The article below was published in 2003 and paid tribute to one of Duquesne’s own.

This entry was posted in Duquesne Carnegie Library, Duquesne Talent, Stores and Businesses. Bookmark the permalink.

15 Responses to Duquesne’s Got Talent