My dad was a master mechanic. If any of his customers were still around, they would attest to that fact. The man could drive a car around the down to the end of South First Street and be able to precisely diagnose the problem just by listening to the engine. With today’s electronic technology, engines are far less mechanical, so Dad’s talents would certainly be put to a test.

A spinoff of my dad’s mechanical abilities was his knack for being able to reinvent, repurpose and fabricate items for everyday use. If he saw it, he could make it! Dad was 15 when the depression hit in October of 1929 with the stock market crash. He was attending St. Adrian’s School in Adrian, Pa which was about 45 miles west of Punxsutawney. Although he never talked about the Depression to any great degree, it must have had an impact on him based on his need to “make do” with items around the house rather than replace them. 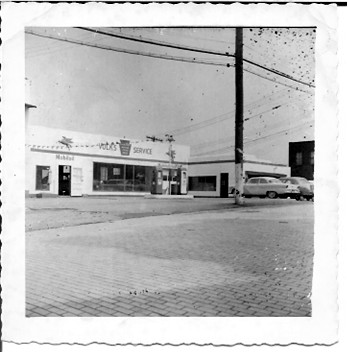 My dad was famous for jerry-rigging just about anything. For example, when his garage on South First Street was forced to close due to the “Redevelopment in Duquesne,” Dad salvaged two of the overhead garage doors and carefully and expertly adapted them for our garage on Thomas Street. It was no small feat since they had to be shortened about 4 feet and narrowed about 2 feet. What I remember more than anything was the confidence that Dad approached this project with.

The determination, the drive was something that was part of not only my dad’s but virtually every hunky possessed. My grandfather built a really awesome cabinet for my dad to use for storing nails, screws, etc., for use at my dad’s business. I remember it sitting on his work bench at his shop and later at his house on Thomas Street. Grandpa built the whole thing out of old fruit crates. In fact, the labels were still attached if you look inside the cabinet. Nothing went to waste.

Our home on Thomas Street was built in 1925. The original owners were a couple whose last name was Stoner. Over the years, the basement began to leak. It seemed to be the fate of every basement in the area. Determined to resolve the problem, my dad tried all of the

usual methods of correcting the problem; waterproof paint both outside and inside foundation walls, new downspouts, etc. Finally his hunky ingenuity kicked-in and he created an interior channeling that allowed the water to be directed into a drain. He basically took sheets of galvanized sheeting, shaped long L-shaped strips that he attached to the basement floor around the entire perimeter of the basement. They were attached about 2 inches from the walls and then were then sealed with tar inside the interior of the strips and along the basement floor. There was only one opening along the entire length of channels and that opening was directed the water flow smack dab into a floor drain. It was ingenious. In the 20 years or so that he remained in the house after he had remedied the situation, the basement floor remained dry without exception.

When my mom decided that she would like a larger patio area in the back of the house, Dad went to work creating one. Along with a few of his brothers, he dug out an area that spanned the entire back of the home and into the back yard about ten feet. He created a form to hold the poured concrete without any background in construction, just hunky common sense. When Mom decided that she would like to have a roof over the new patio, Dad once again used his instincts and designed the perfectly pitched roof from scratch without any engineering training. Instead of using wooden posts to support the roof, Dad took some iron pipes he found near the incinerator on Polish Hill and welded them onto iron plates, creating three awesome, decorative posts for the new roof. He had also managed to find an old rusted section of wrought iron railing at the dump that he then cleaned and scraped back to nearly-new condition, painted and then installed at the end of the patio. 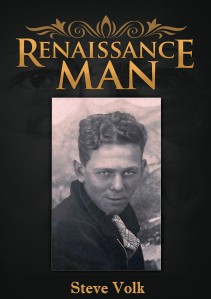 To some degree, my dad as well as most dad’s at that time, were Renaissance Men….. at least the hunky version. A Renaissance Man is defined as a person whose expertise spans a significant number of different subject areas. That definition, loosely interpreted, defines many of our fathers.

On occasion, my dad’s attempts at correcting a problem sometimes fell short of its mark. Once, my dad stayed at the GBU a bit too long. He came home a bit tipsy, and a bit cranky. I remember my mother expressing her “displeasure” about his condition. He yelled something and then stormed up the steps to the second floor. Along the way, he decided it was appropriate to punch a hole in the plastered wall with his fist. That was the first and only time I ever saw him lose his temper like that. I believe it was shortly after he had learned that his business was going to be closed as a result of the redevelopment and “eminent domain.” The very next morning, I remember sitting on the sofa in our living room and watched as Dad sat on the steps, groaning from time to time, and expertly plastering the hole he had created. Mom sat next to me on the sofa, occasionally verbalizing a “hummpf” every once in a while, in order to make Dad feel a bit more guilty about his outburst the night before. The best part however, was when my dad went up to see if it had dried after about an hour. He discovered the entire blob of plaster had fallen out of the hole and lay in a dried-up heap on the steps. 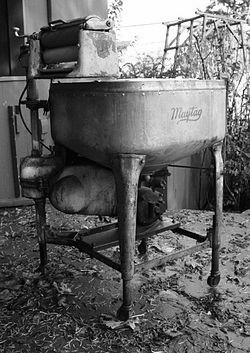 soiled items, such as work clothes and dirty rugs, in a washing machine that would be located outside of the house. I figured he would place it in the garage based on his description of the project. Not so! He decided it would be more appropriate to place it on the back porch, just outside of the kitchen door!

According to his opinion, he had “ingeniously” drilled through the outside wall of the house and inserted ordinary garden hoses to be able to the hot water faucet in the basement! The sight of a washing machine on the back porch was reminiscent of a scene from the movie Deliverance with only the strange looking kid with the banjo and a moonshine still missing from the scene. It didn’t take long for me to convince Dad that he just might have made an error in judgment when he initiated that gem of an idea!

I suppose it was in our father’s hunky genes to inherit certain traits from their ancestors. After all, Slovakia has been responsible for a number of important inventions over the years. Just a few of these inventions and inventors happen to be:

Makes me so proud to be an all-American hunky boy!

This entry was posted in My Hunky Family, Parents, Stores and Businesses. Bookmark the permalink.

10 Responses to Hunky See, Hunky Do!