The Duquesne 4th of July – As I Remember

The 4th of July, when I was growing up, was always a special day for our family. Dad would close his shop and spend the day with us as we traveled about. Usually, the day meant a big picnic at either our house or one of our aunt’s and uncle’s backyards. I honestly cannot remember the day ever being rained out. It seems that it was always a bright sunny and HOT day.

My last post highlighted the 1951 Duquesne Homecoming Celebration that began on July 1st and ran through July 7th. Since I was still a “bun in the oven” and about three months from being “hatched,” needless to say, I don’t remember the celebration. The more I thought about it, by the time I was old enough to remember events of that nature, not much in the way of a city-wide celebration for the 4th of July was occuring, as in years past. 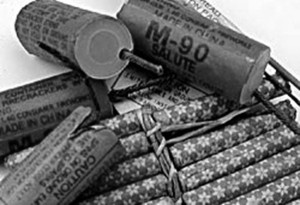 The snapshots of memories that I do recall about the day, are those of blowing up tin cans with cherry bombs, lighting strings of firecrackers on Thomas Street, and of course, sparklers. I remember how Mom would yell at Dad every year for buying fireworks. The theory of “you’re going to blow off your hand” was very prevalent in her warning to my brother and I. To tell the truth, I was always a bit too little and timid of the fireworks, so the lighting of the fuses was normally one my brother Steve or my dad would perform.

The picnic would be the typical Hunky gathering of every first, second and third generation relative in one place. Every aunt would bring their specialty, which would have been defined and assigned as a result of previous gatherings. Somehow, in addition to the traditional hot dogs and hamburgers, a container of stuffed cabbage would invariably be on the menu as well. All the ladies would busy themselves with preparing the various side dishes while the host of the event would carefully build the “perfect” fire for the barbeque. Of course, every other adult male would be gathered around the pit rendering opinions and vocalizing unsolicited suggestions on how to do it better.

Undoubtedly, an argument would ensue, “colorful” names would be called, another round of beer would be served, and then all would be good again.

Before long, everything was ready to begin the feast. The food was wonderful, comforting, plentiful and prepared with love. What could be better? All of my aunts and uncles would finally kick back and just enjoy each other’s company once again. If we were at my Uncle Gary’s on Kenny Street, there would always be an intense horseshoe tournament and we kids would somehow busy ourselves doing much of nothing! 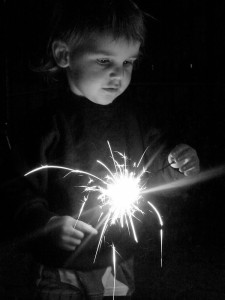 Just about the time the sun finally set, my dad or one of my uncles would spike a huge sparkler into the middle of the lawn and a bucket of water would be placed next to each parent’s supply of sparklers. At just the right time, the big sparkler would be lit to begin the fun. We would each go to our parents for a sparkler and then rush to the giant one to light it. What occurred in the next few minutes was magic to us. We would whirl around in circles, draw shapes in the air, and enjoy the experience to the fullest. Once our sparkler would burn out, we would return to our parents, drop our burnt out sparkler into the bucket and then reload and being the process all over again. This went on for at least an hour. NO matter how long it lasted, it never seemed long enough.

To cap off the evening, we would jump into our cars and head over to Kennywood’s parking lot to enjoy the fireworks show. Mom always had a blanket for us to sit on or we 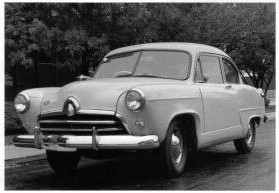 would sit on the hood or roof of our Kaiser sedan. The park always began the fireworks with a “spectacular” on the lagoon stage before the aerial fireworks. I only remember seeing the lagoon show one time. Mom said it was too crowded, so we were content thereafter, to just watch the aerial show from the parking lot. It was always so exciting and so LOUD!! Usually, by the grand finale when there was a frenzy of fireworks, I was about asleep and ready for bed. I remember laying on my mom’s lap as we drove home (pre-seat belt days ya’ know.) The day seemed to pass so quickly but obviously made an impression on this Duquesne hunky.

I thought you might enjoy reading about what was touted to be the biggest and best July 4th celebration in Duquesne’s history. It took place 100 years ago in 1911! There was an extensive article published in the Duquesne Observer describing the event and it is priceless. The journalistic style in that era was wonderful. It was colorful, captivating and almost read like prose as opposed to today’s cryptic news summaries. It is quite lengthy by today’s standards, but it does take you back to what it must have been like to be right there in the crowd. Enjoy:

Uncle Samuel’s eagle was shy several tail feathers when he concluded his visit to Duquesne last Tuesday night. But he didn’t seem to mind it, for he had witnessed one of the most interesting and successful Fourth of July celebrations that had ever been conducted in the Monongahela valley.

The fun started before dawn and it continued, without cessation , until after midnight. It was fizz, boom, bang all day long, and the fact that the mercury was playing around the hundred mark did not tend to dampen the ardor of the crowds. Everyone it seemed, took a hand in the celebration. The mills were shut down, business was suspended, and a good, noisy time seemed to be the idea of all. Many private homes and business houses were decorated, and nothing was lacking to make it an ideal holiday. Of course, there were some burnt fingers and tired bodies; but these were mere incidents in the day’s festivities, and fortunately no one was badly hurt.

Thanks to the Board of Commerce and the activity of its committee on public gatherings and conventions, the town was given one of its few set celebrations of the glorious day. At the ball park the Duquesne team played two games, one in the morning and the other in the afternoon, and on both occasions they took over their opponents in a most pleasing manner. The victim were the P.A.C. of Pittsburg and Baraccas of Knoxville. Prior to the afternoon game, some field sports were pulled off and added to the interest of the festivities. Among the winners were Allen, who copped the 100 yard dash and Hines, who won the long distance ball throw.

During the day, many of the people hiked off to the parks and to private picnics, while others visited with friends in other towns and cities. Most of the citizens however, remained about home and assisted youngsters in cleaning up supplies of fireworks.

But the big event of the day came in the evening, when a great fireworks display and band concert were conducted in front of the Carnegie library. This feature had been provided by popular subscription, and was one that will not soon be forgotten. All day long a committee consisting of E.J. Hamilton, T. Burns and J.S. Edmundson had labored hard to get the fireworks in readiness, and at dark they were still on the job, personally superintending the “setting off” of the display and in many instances, lighting the fuses themselves. They were capably assisted in work by J.E. Brown, D.C. Muir, M. Yoxenheimer and, S.J. Goodman. And too much credit cannot be given to Messrs. Hamilton and Burns and their assistants. It was a warm task, but they endured the heat and smoke that the people might be properly entertained.

An oh, what a crowd of spectators there was. The great lawn surrounding the library was packed. South Second Street was crowed and the library plan contained hundreds of others. Other spots in the vicinity offered points of vantage and they were occupied to the limit. Never in the history of the town had there been such an outpouring of people for any similar event, and the spectacle was a most beautiful one.

Viewed from South First street it was a scene never to be forgotten. As each bomb or shell would explode in mid-air, every face would be turned upward as showers of sparks, shooting stars of varied colors and golden wreaths were dropped from a great height, a chorus of “ohs” and “ahs” could be heard a square away. It was, beyond all question, a splendid exhibition of and so delightfully refreshing that thousands of people expressed the hope that the display might be made an annual event.

One old German woman from the western end of the Second ward grasped the hand of one of the Committeemen and informed him that she had never seen the like of it. She was profuse in her thanks for the happy evening. This was only a sample of what was seen and heard on all sides. The people were more than pleased, and they made no effort to conceal their appreciation.

The display was bubbling over with variety and color and, for an hour or more, the heavens were brilliantly illuminated. In touching off the fireworks not an accident occurred and the program was carried out without a slip of any kind. The exhibition included the following features

The aerial bouquet consisted of a large number of assorted colored rockets assembled in a flight box, fired simultaneously crossing and intersecting in their flight and forming a gigantic bouquet.

But the fireworks display was only a part of the treat that had been prepared for the entertainment of the crowds. Seated at the entrance to the library, the Star of Liberty Band of Wilmerding gave a superb concert. The band is undoubtedly one of the best concert organizations in Western Pennsylvania and, by its clever work in this place, added many new friends and admirers to its staff.

The director is Thomas Scott, and the president Peter J. Levell. The program was made up of popular and classic music, and it seemed as if the people could not get enough of it. They crowded about the band throughout the evening and frequently interrupted the festivities with liberal applause. At the conclusion of the program many persons rushed forward and congratulated the organization upon its clever work. Not a few of them expressed the hope, also, that the band might be heard here again. The program was as follows:

This entry was posted in Duquesne History, Holidays - Non-Christmas and New Years, Kennywood, My Hunky Family, Summertime. Bookmark the permalink.

9 Responses to The Duquesne 4th of July – As I Remember