While most of the people in my area are mourning the passing of summer, I am reveling 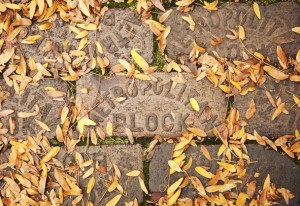 that it’s finally over. There is something about this time of year that delights me more than I can imagine. It bugs the heck out of my co-workers when I come in the office expressing how much I enjoy the cold weather and can’t wait until the temperatures and snow begin to fall. Quite honestly, they think I’m nuts!

Today was a perfect example of what I mean. The temperatures hovered in the high 40’s and low 50’s. It drizzled, showered or teemed rain throughout most of the day. Everyone was miserable, whiney and complaining about the weather….. except me. I was loving it.

When I was a boy, whenever it turned chilly, rainy and gloomy like today, my mom would be hard at work preparing a belly-warming pot of soup. Good ol’ hunky beef noodle soup usually. The process took the better part of the day. She would begin after my brother and I went off to Holy Name School in the morning, and carefully and lovingly pare and chop the carrots, celery and parsley into the perfect bite size pieces. A large chuck of beef would be prepared by washing it down in the kitchen sink and then patting it dry so she could lightly brown it in her cast iron skillet. I never understood this step, but it always tasted so good, who cared.

The Hrvatski Domaća Goveđa Juha (Croatian Homemade Beef Soup) that my mom made, along with every hunky I knew, had an ingredient that I never understood. Mom always said it was her “secret ingredient.” I’m referring to the “soup bone.” I recall grocery shopping with Mom at Kennedy Meat Market (a.k.a. Andy’s) and her asking for a soup bone at the meat counter. It seemed to be as key an ingredient as the beef itself.

Mom would place all of the chopped ingredients, the whole chunk of beef, a couple of peeled onions cut in half, the soup bone, a few spices and water into her soup pot and place it on the stove on a medium flame. She once told me that it was best to bring the 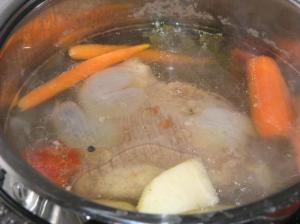 water to a boil very slowly in order to get the best flavor. Eventually, the water would come to a boil and then she would lower the flame and let the soup cook for hours.

At this time of the year, the temperature was in 40’s outside, leaves were falling and there was a definite autumn-like smell in the air. By the time I got home from school, I knew that we were having beef soup for supper. My dad had installed an exhaust fan in the kitchen that was capable of sucking the air out of an entire factory. The aroma of anything that Mom was cooking would be drawn out of the kitchen and blasted out into the chilly fall air. As I walked up the driveway toward the kitchen door, I would immediately be hit with the aroma of the soup as it seem to be suspended in the air between our house and Anna Yasko’s house next door.

When I passed our kitchen window and then stepped up to the kitchen door, the panes of glass would be dripping with condensation as the warmth of the kitchen air battled with the nippy outside temperature. Mom would always be in the kitchen, either stirring her kettle of soup or sitting at the kitchen table waiting for us with coffee cup in hand.

We arrived home after school about 2 hours before my dad got home from work. Mom would always tell us to do our homework when we first got home…. No rest for the wicked. Fortunately, this never took too long for me since I wasn’t quite as focused as a student as my brother was. I always believed that he was the intelligent one, while I was the creative one. However, both Steve and I would eventually make our way outside before dinner and before dark. 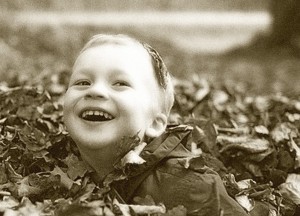 The time between getting home from school and being called in for dinner seemed to go by so quickly. We barely had enough time to rake leaves together for a large enough pile before Mom was yelling for us to come inside and wash our hands. Somehow, every time we went outside to play in the fall, we’d always manage to have muddy hands and soggy, grubby stains on the knees of our pants.

By the time we had cleaned-up after playing outside, Dad was usually home and going through his own clean-up routine at the stationary tubs in the basement. Since he worked at his garage all day, he was usually pretty grimy, looking like he had been pulled from a Gulf Coast oil spill. I can still smell the fragrance of Lava soap as he prepared for dinner each evening. 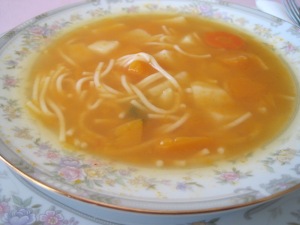 watching TV in the living room, Mm would be busily boiling the noodles for dinner in her yellow kettle. She always used Pennsylvania Dutch brand noodles that were ultra-thin and were the perfect size in my opinion. She would have peeled, and quartered potatoes and have added them to the soup about 30 minutes before dinner so that when suppertime rolled around, she was 100% set. 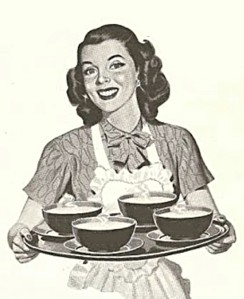 beef soup. I even loved the carrots! Spoons would clanks against the side of the bowls as we ate and we were always allowed to lift our bowls and slurp to our heart’s content. Polite society be damned…… hunkys knew how to enjoy soup!!

After we had finished our bowl or bowls of soup, Mom would clear away our bowls leaving the dinner plates below. She would bring our large blue platter to the table that was loaded with the soup meat, potatoes and carrots that had been fished out of the soup kettle. I think that was my favorite part. I remember getting a hunk of beef and shredding the heck out of it. Since it had been cooking for hours, there really wasn’t a ton a flavor left in it, but smear some ketchup on it and a bit of salt and it was divine. Mom and Dad preferred to mix some horseradish into the shredded meat on their plates, but I didn’t have the stomach for that. The potatoes were placed on our plates, and we’d crush them with our forks, add a few pats of butter, salt and pepper and dig in. This was really “stick to your ribs” foods hunky style. Mom would have usually picked up a loaf of bread from Bon Bon Bakery in the Kroger Shopping Center across the street, have them slice it in their slicing machine. And allow us a few pieces with our meal.

These memories were provoked today by the weather report I saw online for Duquesne.

There was an ever so slight chance of snow. I was so jealous when I saw it, and then began thinking of cold fall days in Duquesne. I miss the excitement of knowing there was a possibility of snow this early in the fall. I checked out one of the weather cameras from the Duquesne area and saw the familiar snow clouds looming over West Mifflin High School. I remember getting so excited when my dad would point to that type of cloud and tell me that whenever I saw them, it meant snow was on its way. Come on winter…bring it on!

This entry was posted in Autumntime, Food and Restaurants. Bookmark the permalink.