The Sundays Of My Youth

This past Sunday was a crazy day for me. For me, so many activities are always pushed to Sunday as a result of my work commitments throughout the week; church, weekend d.i.y. projects around the house, cleaning the house, household maintenance issues, shopping expeditions, preparing meals, car repairs, etc. I always try to cram so much into one day, that by Sunday evening, I am usually BEYOND exhausted!

Sundays were so different when I was a kid in Duquesne. Sunday morning always meant going to 9 o’clock Mass at Holy Name. Of course, once I became an altar boy, things changed since I might have been scheduled to serve Mass at any of the four Masses scheduled each Sunday.

The first two Masses were scheduled specifically to coordinate with the shift schedule at the mill. For the men working “Daylight” (7 am to 3 pm), Holy Name offered a 6 am “Low Mass.”  The workers that had worked “Night Turn” (11 pm to 7 am) were able to attend the 7:15 Low Mass. The 9 am Mass was the Children’s Mass. Student’s from Holy Name, as well as any school age child in the parish were invited to sit together in the pews at the front of the church. Although I am sure there were incidents of kids misbehaving, for the most part, one glare from any of the nuns that would guard and patrol the group would squash any “uprising!” Just like the first Mass of the day, the 7:15 and 9 o’clock Masses were also Low Masses. The final Mass of the day was at 11am and was celebrated as a High Mass.

Now, to be perfectly honest, as a wee altar boy, the difference between a Low Mass and a High Mass was that we would light more candles and it lasted longer. I didn’t know why it lasted longer, but I usually blamed it on the choir. In researching the information about the two different Masses, I discovered the following:

Low Mass (called in Latin, Missa lecta, which literally means “read Mass”) is a Tridentine Mass defined officially in the Code of Rubrics included in the 1962 edition of the Roman Missal as Mass in which the priest does not chant the parts that the rubrics assign to him. A sung Mass in turn is a Solemn or High Mass if celebrated with the assistance of sacred ministers (deacon and subdeacon); without them it is a Missa Cantata.

After our family had attended mass, our Sunday’s rolled out the same way for as long as I could remember. After we returned from Mass, Dad would always begin his Sunday morning ritual of preparing some over the top breakfast for all of us. Mom would kick back on the sofa and begin reading the Sunday paper while sipping a cup of coffee. Dad’s breakfasts ranged from perfectly prepared pancakes, to bacon and eggs, to a special concoction that he would create and call “soft-scrambled eggs.” His creation was slow cooked scrambled eggs that contained lots of milk to keep the eggs creamy, and chunks of fried Spam! Whenever he would be making that, my cousins Paula and Karla were always right there enjoying it with us. I was usually assigned toast duty, and would be responsible for preparing a mound of buttered toast that would sit in the middle of the breakfast table and be up for grabs for anyone.

We rarely had to deal with the distractions on Sunday that we deal with today. Stores weren’t open for the most part, a few gas stations might be open, grocery stores were closed and people were generally forced to spend time with their families. Although my dad might have a project to complete around the house, he would always try to get it done on Saturday so that he could have Sunday free.

A visit to my paternal grandfather’s house was always on the agenda on Sunday. NO matter when we visited, food was always involved. We were hunkys, what did you expect! We would usually eat lunch or dinner at Grandpa’s house. Somehow, there was always enough for everyone who showed up. It was like the Volk’s version of the loaves and fishes! There always seemed to be the hunky staples of soup, ham, stuffed cabbage rolls and kielbasa available throughout the year. We never tired of the food and being able to enjoy it with my aunts, uncles and cousins made it even more special.

At some point during our visit, my dad and his brothers would excuse themselves and gather either in the kitchen or on the porch for some hunky “libations!” Always beer and always whiskey.  Shots and beers were the only beverages that crossed their lips. Inevitably, my mom and my aunts would get ticked off at the fact that they were drinking, go out and yell at them and then give up and return to the kitchen.

At that point, the ladies would pour themselves cups of coffee and pull out a deck of cards to begin a game of euchre or gin rummy. The kids were busy running amok throughout the house, the basement and the yard, so we were occupied and they didn’t have to worry about us. After they had finished at least two or more pots of coffee and had tackled countless games of cards, it was time to round up the guys and head home for the evening. That wasn’t an easy task since the men were probably feeling really, really good, and would be reluctant to leave. After a few bouts of yelling by my Aunt Helen however, they would disburse and pack the Mrs. and kids into the Kaiser and head home. Fortunately, we always arrived home safely, along with all of my other aunts, uncles and cousins. I think that by Sunday evening, most everyone on the road in Duquesne and West Mifflin had been enjoying themselves in the same way, so everyone was extra careful while driving. It is amazing to think of how we all  survived as kids without the use of seatbelts, car seats, etc. 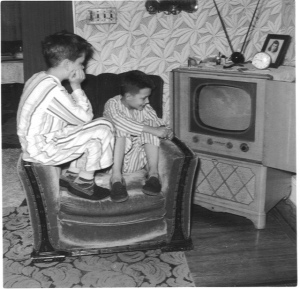 Sunday night routines didn’t waver much throughout the school year. From September through June, Sunday evenings meant getting a bath before bedtime. Reluctantly, my brother and I would march up to our second look bathroom and begin our preparations for the start of the school week.  Although it could have been a disappointment that the day was nearly over, it never was. We always knew that we still had more in store that evening as we all gathered as a family to watch some of our favorite TV programs.

We never had the myriad of channels to choose from while growing up in Duquesne. There were only channels 2,4,11 and 13 and MAYBE if you were lucky and the wind was blowing the right way, you could get channel 6 out of Johnstown or channel 9 which was broadcast out of West Virginia or Ohio, I think.

In the 50’s and early 60’s, Primetime TV shows began 30 to 60 minutes earlier than today, starting each evening in some cases as early as 7 p.m. On Sundays, the primetime viewing began as early as 6:30 p.m. with some of our favorite programs. Throughout most of my childhood, our Sunday evening viewing became tradition. Lassie, Walt Disney’s Wonderful World of Color, The Ed Sullivan Show (known earlier as Toast of the Town), Bonanza, Candid Camera and finally, What’s My Line was the litany of programs we’d follow each week. When Bonanza shifted to the 9 to 10 p.m. time slot in 1961, we were even allowed to stay up and enjoy the show with our parents. That was such a treat and a great way to end Sunday for us. Seriously, how could one go wrong with Ben, Adam, Hoss, Little Joe and Hop Sing!?!

Now, enjoy a bit of nostalgia with some YouTube clips of these fabulous shows and let us all know your favorites!

This entry was posted in Church and School - Holy Name, Life in General, Miscellaneous, Movies, Music, Radio and TV, My Hunky Family, Parents. Bookmark the permalink.

22 Responses to The Sundays Of My Youth