As a student at Holy Name School on First Street, I remember vividly, all of the traditions that we followed during the Lenten and Easter season. Most of the activities were initiated by the good Sisters of St. Joseph that taught us each day, however, some were also family traditions that were started by our families.

I remember that having to decide what I was doing to “give-up” for Lent was always one of the most difficult decisions I had to make each Lenten season. Being a picky eater, it seemed that if I gave up any particular food, I was probably eliminating a major food group. I was never able to convince the nuns or my parents that it was a good idea to give up things like spinach, brussel sprouts or kohlrabi was a good idea since I basically would never eat them anyway. As a result, I was more inclined to sacrifice playtime instead. I would typically give up a few hours each weekend to help my mom or dad around the house, doing extra chores. If I felt particularly “saintly,” I also remember giving up cookies or candy, although I tried to avoid such difficult goals.

season. The purpose of the boxes was to sacrifice part of our allowance for the poor. Dutifully, I would keep my collection box in the kitchen and periodically drop pennies, nickels and dimes into it as I earned them. On Holy Saturday, the boxes would be collected at the back of the church prior to the afternoon Stations of the Cross. Every child at Holy Name would bring in their little collection boxes, crammed with change and proudly place it in the box next to their classmate’s contributions.

As an altar boy, I would participate in Station of the Cross services throughout the Lenten season. Although they

were somber services, as mere lads, altar boys were able to derive pleasure, albeit mischievous in nature, from serving at the Stations of the Cross. First of all, it was a sign of altar boy hierarchy to be able to carry the cross to each station. However, that privilege only came with tenure and age. However, the real fun was carrying the candles around to each station. The mission was to see if we could tilt the lit candles in such a way as to allow them to drip down the sides of the candle without getting onto the floor or our hands. If we were successful, by the time Jesus is laid in the tomb at Station 14, we would have a large accumulation of wax at the bottom of the candle from our efforts.

As we approached the end of the season of Lent, I recall visiting by Grandfather’s house on Duquesne Avenue in West Mifflin and watching my Aunt Peggy and Aunt Helen busily preparing some traditional Easter foods. In particular, I remember the smell of freshly baked breads as they made perfectly formed loaves of paska with raisins and my favorite, Hot Cross Buns.

I found the two recipes that my aunts used for their Easter baked goods. The cookbook of 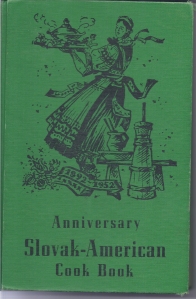 choice, sort of the hunky cook’s bible is the Slovak-American Cookbook that was published in 1952. All of my aunts and my mother used it, and I still do to this day. Both recipes are contained in the book and I am going to be very daring and attempt both of them this year. Both items were always made with raisins, so I too with use them. If I remember correctly, my aunts would always use a combination of white and dark raisins in their paska, and of course I’ll be doing the same. 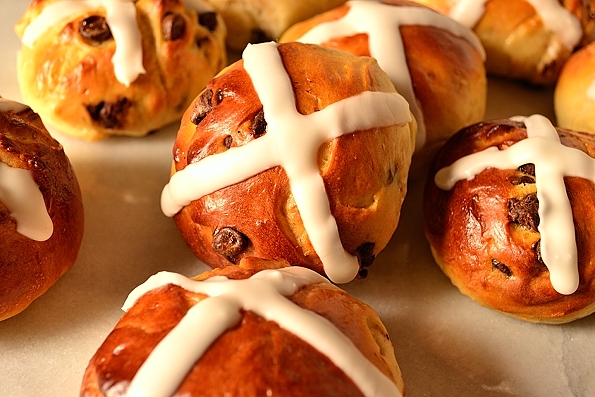 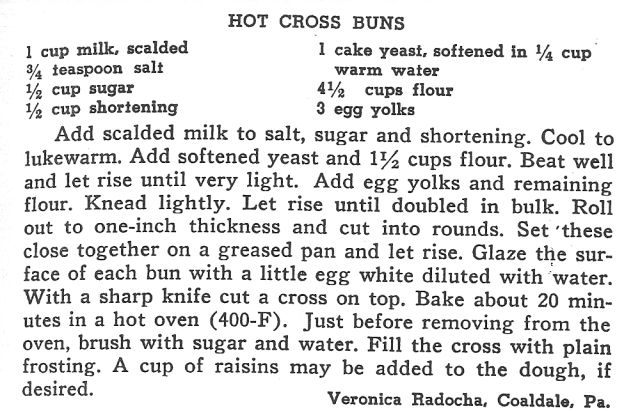 As I was surfing the web, I discovered another entry that describes Slovakian Easter traditions. No matter how often I read about, I still shake my head in amazement over the idea that “whipping” women would be any culture’s tradition. But, leave it to us hunkys!!!!

As a native-born Slovak, it never occurred to me that there was anything striking about the way we celebrate one of the biggest of all Christian festivities, Easter. The suspicion that there was something peculiar about some of our customs only came when I was first confronted with the bewildered looks of foreign visitors to our country who obviously could not understand how they had managed to survive. And though these guests did not ask directly, they all seemed to wonder what the point of our ancient practices could possibly be.

It is difficult to understand, I admit, why a young girl dressed up in the national costume should be screaming with apparent enthusiasm while being chased by a bunch of young men who are trying to catch her and throw her in a nearby creek. But such scenes – I promise you- are now rarely seen in modern Slovakia.

An inevitable part of our Easter fun stems from a special willow cane which is hand-woven and decorated with colourful ribbons. Men pursue women brandishing the light branch, called a “korbáč” in Slovak, and use it to “whip” women on the legs when they catch up with them.

According to the traditional ritual, the ribbons on the cane, one of which is added by each victim, testifies to the number of girls and women a lad has managed to soak or whip. In turn for the happy bath and the enjoyable whipping of legs, girls give away hand-painted eggs, or chocolate eggs to young boys. The adults are usually offered a drink of spirits. While some parts of the genuine ritual are no longer observed, the drinking still remains on the list of inevitables nationwide. If you are lucky you can see the traditional Easter in villages. But even there the tradition has been adjusted to a more modern approach. In the cities, of course, people have always had the tendency to neglect folklore.

If I could speak for the women of this wonderful country, I would definitely say that if some progressive national assembly suddenly decided that the Easter Monday craze would be dropped forever, we would all be for it. Just imagine that you have spent the whole weekend shopping for food to be able to prepare all the necessary dishes for Easter. Common throughout Slovakia, for example, is the dish of potato salad and smoked ham, which is cut in thin slices and served on a plate. Every good housewife also bakes at least three sorts of cakes or pastry. When all tasks are done and finished on early Monday morning, women are usually simply too exhausted to resist the water violence effectively. They feel lucky if they manage to sneak out of the bed while the males of the house are still asleep because by male standards it is thought to be the greatest fun if they can attack the unwary victim with a bucketful of cold water in her bed. During the morning, the male relatives and friends ring the doorbell and repeat the ceremony of splash-and-whip again and again. As a woman you have to make sure that you have enough dry things to change into because you never know how many visits you can expect.

One variety of late 20th-century “whipper” has gotten, thank God, a bit more practical. He no longer carries a bucket of water with him. Instead he asks the lady for a cup, fills it with cold water, and then splashes it in her face. The whipping is culturally in retreat as well. Originally thought to keep women fertile, healthy and fresh for the rest of the year, our men are not so sure about that anymore.

In most areas of Slovakia to be a fully equipped whipper you have to have a small bottle of perfume in your pocket. To spray a few drops of perfume on the hair of the fairer sex is considered the final phase of a successful whipping turn.

Easter in Slovakia is loved by men and hated by the women. Never in my life have I met a woman who would praise this tradition. If possible, some women even choose to leave their homes for Easter weekend, and spend it in peace with friends who also find traditional Slovak Easter a little too much to handle.

So, if you need to make a decision about which tradition you’ll be honoring, I would suggest attending the Stations of the Cross and tackling a wonderful loaf of paska! It sure is something that you will enjoy AND it will keep you out of jail for whipping and drenching some poor unsuspecting hunky young lady!!!

This entry was posted in Church and School - Holy Name, Holidays - Non-Christmas and New Years, My Hunky Family, Springtime. Bookmark the permalink.