One of Duquesne’s Beautiful Ol’ Gals

September 9, 2012 would have been the 100th birthday of a very important part of many of our lives. In the September 13th issue of The Duquesne Times, an article appeared that annouced the opening of Duquesne’s newest school, Holy Name.

The opening was heralded as an “auspicious” occasion, with 250 pupils registered on the first day. Considering the fact that only four of the rooms were initially to be occupied, that meant there were over 60 students per room!! Eventually, all rooms of the building were occupied, and came to include high school classes on the third floor. 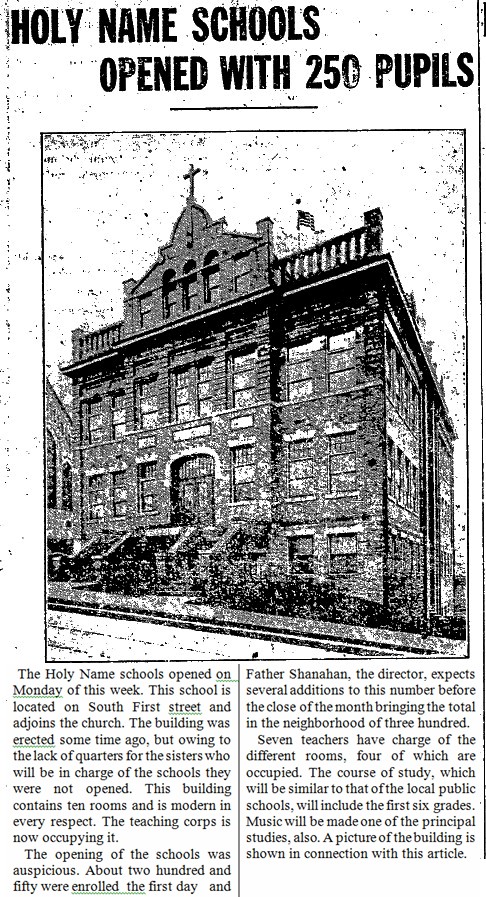 Postcard image of Holy Name School in all its glory –

That building was such a huge part of my life, and I knew it like the back of my hand. I remember:

Our mutual friend, Jim Hartman of the Mifflin Township Historical Society, has provided copies of photographs taken during the demolition of our beloved Holy Name Elementary School.

I happened to be visiting Duquesne the very week that the school was being torn down in April of 2005. I had not heard that the school was to be demolished, so you can imagine my surprise as I parked in front of the post office and just stared. I managed to grab 3 bricks from the heaps that surrounded the demolition site. I still have them, and I hold them very dear.

You will FOREVER be in our hearts. Happy Birthday you BEAUTIFUL ol’ girl!

This entry was posted in Church and School - St. Joseph. Bookmark the permalink.

29 Responses to One of Duquesne’s Beautiful Ol’ Gals