Steeler Football Is A Religion Not A Sport !!!

I had to pass along the following that was sent to me by our friend and former Duquesne kid, Barry Long! Barry currently makes his home in Honolulu, Hawaii for 7 months each year, and in Kirkland, WA for 5 months. (We feel for ya Barry! L.O.L.) I am certain you’ll enjoy it. I adapted it just a tiny bit to bring it even closer to the home we all love. THANK YOU BARRY!!! 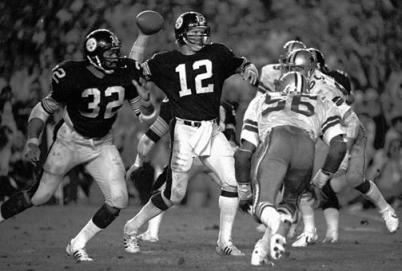 Being a Steeler fan means so much more than football. It means being from a corner of the world unlike any other.

It means being from a place where the people are so tough-minded that they have survived the Homestead strikes, the Johnstown flood and most recently the Etna Floods. These people have the DNA of hard work, in mills and mines, without the necessity of complaint. They live simply, with no frills. They don’t have movie stars or fancy cars.

Instead, they have simple traditions like kielbasa, Kennywood, and celebrations. They live in distinctive neighborhoods like Polish Hill and the Hill District and all of the surrounding counties. These people are genuine.

They don’t have chic internet cafes and cappuccinos, but they have Jim’s Hot Dogs, Paule’s Lookout, Eat n’ Park and Iron City Beer.

People from Pittsburgh don’t have sunny beaches or fancy boats, but the rivers roll gently, connecting the small towns of people whose histories have been built on strength and humility.

People from Pittsburgh don’t have the biggest shopping malls or the best nightclubs, but they’ll take Friday night high school football and Steeler Sunday over anything.

Steeler football means so much more than you think. It symbolizes a diaspora of generations who had the best childhood they could imagine.

As the steel mills closed and the jobs disappeared, some of these people had to leave. While the world benefits because they spread their Pittsburgh values, they long for their home where things were simpler and more pure.

They teach their kids about Jack Lambert, Lynn Swann, Terry Bradshaw, Franco Harris, Jack Ham, and L.C. Greenwood, Joe Greene, and Myron Cope in hopes of imparting not just the knowledge, but the feeling that they represented.

They are everywhere, those Terrible Towels. They wave, not just for the team, but for the hearts they left behind.

They wave in living rooms in Nashville , TN , Fort Lauderdale and in the bars of Washington , D.C. They wave all the way to the Seattle Superdome! They wave for the Rooney family, whose values mirror our own – loyalty, grit, and humility.

They wave for football players like Jerome Bettis and Hines Ward, whose unselfishness and toughness have allowed sports to be about the game and the team.

Make no mistake that Steeler football is not just about football. I could not be prouder to be from the Pittsburgh area than I am right now!!

Even if you no longer live in the area, you have South Western Pennsylvania in your blood no matter where you go.

And deep down in your heart of hearts, you can still hear the Super Bowls of times past, the excitement in everyone’s voices especially our fathers, cousins, and anyone else who gathered around the TV on Football Sundays!

Make no mistake, it’s just as exciting right now! It’s not just about rivalries and who is better than the other, it’s about family, tradition and roots! It’s more than football, but its football at its finest! If you now live in Arizona , Colorado , Ohio , Indiana , California , Florida , Nevada , or Tennessee , be proud of where you were born and who your FIRST favorite football team was!

Yunz is from the Picksburgh area or maybe you grew up there if:

1. You didn’t have a spring break in high school.

2. You walk carefully when it is “slippy” outside.

4. You’ve told your children to “red up” their rooms.

5. You can remember telling your little brother/sister to stop being so ” nebby.”

6. You’ve gotten hurt by falling into a “jaggerbush”.

7. Your mother or grandmother has been seen wearing a“babushka” on her head.

9. I ask you to hand me one of those “Gum-Bands” an’ you actually know what I’m talking about.

10. You know you can’t drive too fast on the back roads, because of the deer.

11. You know Beaver Valley , Turtle Crick, Mars, Slippery Rock, Greentree, Brockway and New Castle are names of towns. And you’ve been to most, if not all, of them.

12. A girl walks up to three of her girl friends and says,“HEY,YENZ GUYS!”

13. You hear “you guyses” and don’t think twice. Example: “you guyses hause is nice.”

14. You know the three rivers by name and understand that “The Point” isn’t just on a writing instrument.

15. Someone refers to “The Mon” or “The Yough” and you know exactly what they’re talking about.

17. Someone starts the chant, “Here we go Still-ers!” and you join in. In the proper cadence, waving the appropriately colored towel.

19. You’ve either eaten a Farkleberry Tart or know someone who has.

20. You drink pop, eat hoagies, love perogies and one of your favorite sandwiches is chipped ham on white with mayo, all at room temperature!

23. You know what Eat ‘N Park is and frequently ate breakfast there at 2:00 AM after the bar closed and made fun of people.

24. You order “dippy eggs” in a restaurant and get exactly what you wanted.

25. You spent your summers, or a school picnic at Luna Park , Kennywood, Westview, Sand Castle, or Idlewild.

26. You’ve been to the Braun’s Bread Plant or Story Book Forest for a school field trip. We went to the Heinz plant and the Isaly’s plant for Cub Scouts.

27. “Chipped ham” was always in your refrigerator when you were growin’up.

28. You refuse to buy any condiments besides Heinz unless a Pittsburgh athlete’s picture is on the side of the container.

29. When you call the dog or the kids you shout, “Kum-mere” and they come.

30. Franco, Roberto, and Mario don’t need last names and you can recite their exploits by heart.

You’ll send this on to family and friends who used to live in the Pittsburgh area as well as to those who have never lived there, just so they can appreciate how different western PA really is. Wonder how many of yinz guys actually understood all dat? Some folks just don’t.

Finally, from a wonderful IUP co-op teacher over in Johnstown:

And the gentle breezes blow

Oh, how I love Pennsylvania

When the snow’s up to your butt

You take a breath ofwinter

And your nose gets frozen shut.

Yes, the weather here is wonderful

So I guess I’ll hang around

I could never leave Pennsylvania

‘Cause I’m frozen to the ground!!

This entry was posted in Food and Restaurants, Sports. Bookmark the permalink.

22 Responses to Steeler Football Is A Religion Not A Sport !!!