Well, it’s just about time for another ketchup bottle to be cleaned out. As I mentioned in 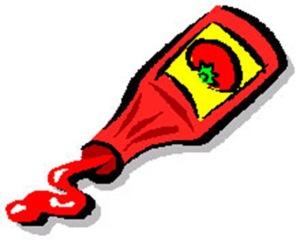 past posts, periodically, my wife will create a pot of the most fantastic chili by adding miscellaneous ingredients that may need to be used up, rather than just discarded. One of those items is the ketchup from a nearly empty bottle. With just a bit of water added to thin the contents, Judy will add the watery mixture to the pot of chili and voilà, tastier chili!!  To me, emptying the ketchup bottle on my blogs allows me to post some random and disjointed thoughts that I’ve been holding inside. Thanks for putting up with the haphazard comments that fortunately do not surface too often! Here goes: 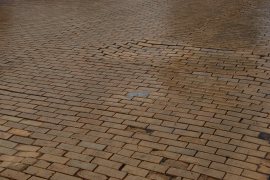 to the site where a street crew would be working on a repair along Kennedy, Grant or any one of the many brick paved streets in Duquesne. Each one would be lovingly replaced when the work was done, thus preserving the streets we loved.

♥Truth be known, I hated the smell at Avenue News, aka “Elsie’s” when they were roasting peanuts. I can’t stand the smell or taste of peanut butter either, so it’s no wonder the smell turned me off.

♥ I used to love going to the Hilltop Dairy at the top of Kennedy Ave., but was always scared of the back portion of the store. It always seemed kind of ominous to me. I preferred the front part of the store and the candy counter where Mrs. Simcina would always be standing. 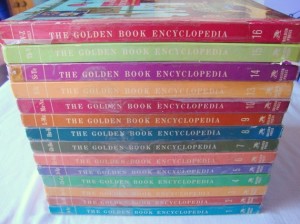 different sets of encyclopedias from Kroger’s. The first was The Golden Book Encyclopedia. If I remember correctly, Volume 1 was priced at 49¢ with the remaining 15 volumes priced at $1.49. Each week I would eagerly await the next volume to arrive in the store. The book was an adventure, containing page after page of colorful illustrations, photos and information. I used these books throughout grade school, researching information that helped me to ace homework assignments.

Kroger’s launched another promotional program in the late 50’s that caught my mom’s attention once again. Although the premise was the same, this time the encyclopedia offered was the Funk & Wagnall’s Standard Reference Encyclopedia.

There were 25 volumes in the set and it took Mom half of the year to collect the entire set. 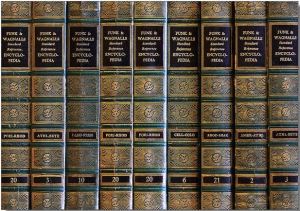 They had a green binding with shiny gold lettering. The set was published in virtually all black and white, including illustrations and photos. There were only a few color insets, so my excitement when a new volume arrived had waned a bit versus the Golden Book Encyclopedia. Nonetheless, long before of the existence of the internet and thanks to Kroger’s promotion, Funk & Wagnall’s served as the resource for home based research for many Duquesne students!

In case the name Funk & Wagnall’s sounds somewhat familiar, in the late 1960s through the early 1970s, Funk and Wagnall’s became part of one of the iconic jokes on the ground-breaking show Rowan and Martin’s Laugh-In, where a frequently-made reference was “Go look that up in your Funk and Wagnall’s.” Also, Johnny Carson’s Carnac the Magnificent sketches on The Tonight Show frequently made reference to the ‘answers’ being hidden from Carnac as “These envelopes have been hermetically sealed. They’ve been kept in a mayonnaise jar on Funk & Wagnall’s porch since noon today.” (Wikipedia)

created a page on Facebook that is dedicated to Duquesne’s Croatian Immigrants. According to the page’s basic information section, the purpose of the page is to:

“Preserve Information and Pay Tribute to first and second generation Croatians that immigrated to Duquesne, Allegheny County, Pennsylvania and to those who lived and loved there through the first half of the 20th century.”

“Many Croatians immigrated to the city of Duquesne at or around the turn of the 20th century to work in the steel mills. Generations of their descendants have since scattered throughout

the United States and elsewhere, taking with them old photos and family stories that document the extraordinary lives of their forefathers. This is a gathering place where people can share, preserve, and honor the memories of those early Croatian Immigrants to Duquesne.”

Patti has posted many pictures of wedding parties of couples from Duquesne. Some of the weddings took place in Duquesne, but others were in McKeesport or Rankin. I chatted with Patti this morning, and she would love our help in identifying some of the people in the photos. I was able to identify only one person, my Aunt Rose (Puskaric) Carr, in one of the photos. Dust off your best pair of reading glasses and memories and have at it. It will certainly be an adventure.

In addition to needing your help to identify the people in the posted photos, Patti would love to have additional vintage photos posted as well. The photos do not need to be of a wedding party. The only criteria she’s looking for is that the subjects fit the theme of Duquesne’s Croatian Immigrants.

I am posting a few clips of the photos in order to whet your appetite, so be sure you make your way to the page and check it out! If you have any trouble reaching it, let me know and we’ll work through it.

♥I don’t know about you, but I sure am missing real winter weather. Living on the shore as I do, the occurrence of snow does not happen too often, but we will normally get at least a couple of measurable snowfalls each year. This year? Nada!

In my mind’s eye, I harken back to those wonderful snowfalls we used to get in Duquesne. Snow pretty much covered the ground from December through February. Repeated smaller doses of snow and the steady stream of traffic to and from the mills, kept Grant Ave. and Kennedy Ave. snow covered throughout the winter. What now frightens people living south of the Mason-Dixon Line, was a normal part of life for us. Snow, unless it was monumental, never stopped the Duquesne Hunkys! We were invincible.

As a boy, I used to love sitting and staring out of my parent’s bedroom window at night time during a snowfall. Although the storm windows Dad put up each year helped to fend off the winter wind, icy crystals would always form on part of the glass, adding to the wintery view as I gazed out.

There was a single light pole on Thomas Street. It stood across the street from our 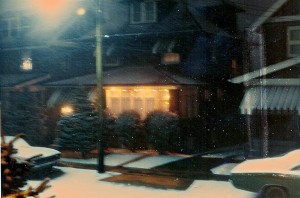 house, right between the Gregory’s and the Hank’s homes. There was a huge incandescent lightbulb that glowed under a white round and ruffled metal shade, and just like the sky over the steel mills, the bulb cast a similar yellow-orange glow to the street below. In spite of the frosty windows, I remember seeing the snowflakes wildly flying by.

I would watch for hours, praying that the snow wouldn’t let up and the morning would deliver a day off from school and ideal sledding conditions for the roads leading out of St. Joe’s Cemetery.

♥I think there was a special category of food from Duquesne that would have been aptly titled “Duquesne Hunky Comfort Food.” This was especially true in the cold winter months. You could enter almost any home on a cold winter day and immediately smell the aroma of homemade soup filling the air.

To this day, nothing tastes better to me than a hot bowl of hunky chicken noodle soup. Loaded with those thin noodles, loads of carrots, parsley and celery, and then topped with some crumbled crackers. We would also have beef soup that contained the same ingredients as the chicken soup plus loads of onions as well. There was always something wonderful about coming into the kitchen from outdoors and seeing the thick condensation that had gathered on the windows from the warm and steamy kitchen. We’d immediately plop ourselves down at the table and enjoy the tasty treat Mom had prepared.

Just as good as the soup itself, was the meat that would be scooped out of the broth, placed on a platter, and surrounded by 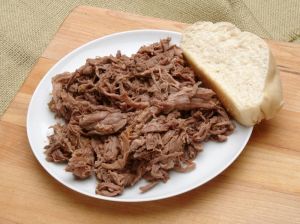 the potatoes and carrots that were cooked in the soup. We’d shred the beef on our plates and drizzle ketchup over it, a big pat of butter would be placed on our potatoes and then we would dig into one of the best meals around. Not a drop of soup or morsel of liquid, meat or veggies would be wasted. The soup pot would make its way to the stove each evening during the week until it was finally consumed, with each night’s reheating adding more and more flavor to the concoction.

In addition to soup, another favorite that my whole family would prepare would be this marvelous blend of macaroni, loads of crispy chopped bacon and thick tomato sauce that clung to the macaroni and bacon. It would be served hot and went perfectly with a grilled cheese sandwich. I could have eaten tons of the stuff. It was pasta before pasta was cool!

I am certain the each of you have your special memories of your favorite Duquesne comfort food. Please take a few moments and share your thoughts with all of us. We’d love to remember with you, and who knows, maybe you’ll help us remember a long forgotten favorite of our own!

“Tu je k dobrému zdraviu a dobré jedlo” or in other words, “Here’s to good health and good food!”

7 Responses to Time to Empty the Ketchup Bottle Again