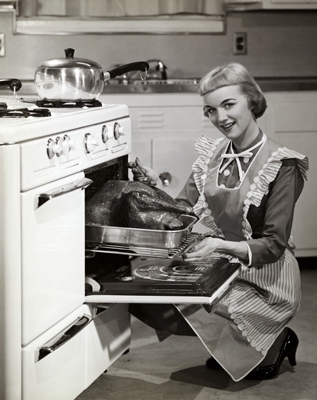 OK, I will be the first to admit that I am the world’s biggest softie when it comes to Thanksgiving and Christmas. I find solace and comfort in some of the most incidental things at this time of year. A site, a smell, a sound, a song.

A whiff of cinnamon and cloves immediately transports me to another time, a time when those warm fragrances surrounded me as my aunts busily prepared a thanksgiving feast for the entire family at my Grandpa’s house. Seeing a line-up of pumpkin pies in the bakery section of the supermarket reminds me of see freshly baked pumpkin and pecan pies lined up of the kitchen table on Thanksgiving morning. The clang of pots and dishes emanating from the kitchen of a busy restaurant brings me back to the organized chaos that occurred in Grandpa’s kitchen on Thanksgiving morning.

For as long as I can remember, we always had a TV in our living room

as I was growing up. The first one I remember was a Crosley. Every Thanksgiving morning started the same way for my brother and me. It meant a hearty breakfast of both bacon and “dunking” eggs or my dad’s specialty of pancakes and sausage. While he busily prepared breakfast, Mom, Steve and I would park ourselves in front of the TV and watch the preparations for the Macy’s Thanksgiving Day Parade. They always televised the huge balloons being inflated, bands practicing and hundreds of people lining the streets, smiling and waving. It always seemed to be either snowing or very cold. (It wasn’t until I tried to locate some photos take in the 1950’s of the parade that I realized that it almost never snowed during the parade and what I was probably remembering was the snow resulting from  the antenna!) I recall the announcers being bundled up in fur coats, back when it wasn’t considered politically incorrect to do so. Usually, the chill was so bad, that you would see every spoken word escape their lips in the form of a puff of smoke.

As if he timed it around the parade, Dad always seemed to be calling us to the breakfast table with enough time to enjoy the breakfast and be able to return to the TV in time to watch the parade from the beginning. The telecast of the parade itself was very different from the way it is presented now. I remember that the parade was just that… a parade. They didn’t have special performances or groups stopping in front of Macy’s to lip-sync to a recording they made earlier. The parade was bands, floats (sometimes with a star riding on it), huge balloons and LOTS of people marching in step to the music. Pretty straight forward.

Almost immediately after the parade, we were hustled upstairs to get dressed to go to Grandpa’s. My standard outfit in those days was corduroys and a flannel shirt. I would be dressed and ready to go in a matter of minutes, looking like a little lumberjack. We’d all

pile in our blue 1951 Kaiser and head over to Duquesne Avenue in West Mifflin ready for our BIG day! Steve and I would be in the backseat, unbuckled, usually torturing each other and irritating Mom and Dad. If it had snowed that day, the ride was even more fun since there were lots of hills between our house and Grandpa’s. It was only a 3 mile trip, but with a heavy snow, it sometimes took quite a while to negotiate the ups and downs on the trip.

Once we arrived at Grandpa’s house, we’d pile out of the car and head into his for the day. It wasn’t a big house, but it was able to accommodate the entire Volk Clan. All of my cousins would eventually arrive and the kids would all end up either in the basement or the upstairs bedrooms to play. The noise level in the house was a cacophony of kids laughing, pots clanging in the kitchen, our moms yelling at our dads, and our dads laughing while they kicked back with the guys to have a shot or two along with their Iron City. I have to laugh when I think about how mad the ladies got at their husbands. It irritated the heck out of them that my dad and my uncles basically did nothing other than entertain one another the entire day with the exception of setting up the HUGE banquet table that spanned two rooms…. oh yes, AND watch any football game that happened to be on TV.

While all of the chaos was going on in and around the kitchen, my cousins and I continued playing, unconcerned about all of the noise. We were making enough of our own, and even managed to prompt and occasional “quiet down” from one of the adults. Around 2 or 3 in the afternoon, our little noses seemed to perk up in unison as the wonderful smells of roasted turkey, pumpkin pies and freshly baked dinner rolls began to permeate the air. As if by instinct, we knew that our play time was about to end and we would all be enjoying a Thanksgiving feast by the customary time of 4 o’clock.

As the preparation of the feast drew dangerously close to completion, the “men” of the family would go about their duty of setting up the make-shift banquet table. Smaller tables would be shifted to accommodate plywood extensions to make a larger eating surface. Chairs would be gathered from every corner of the house and basement, tablecloths would be draped and before you knew it, the adults table was prepared and set. The array of mismatched dinner plates was huge but still looked welcoming and festive. The second part of the men’s duty was to pull together the “children’s table” in the kitchen. The best part was to see them manage their task while trying to keep out of the way of all of my aunt who were trying to finalize the meal.

So, let’s talk about the children’s table. I think it was part of every baby boomer’s childhood. Due to the number of adult members of our “Clan,” each holiday dinner would feature a children’s table. It was always the saddest little table, surrounded by sad little chairs. It was always in the kitchen since it was inevitable that one of us would manager to spill something across the table and onto the floor. Since we all hadn’t matured in the refinement of our eating habits at that age, it also gave us the venue to cram too any mashed potatoes into our mouth, to shoot an occasional pea across the table and to have as many dinner rolls loaded with REAL butter as we wanted without getting yelled at. Although the segregation was a bit disheartening, we always managed to work it 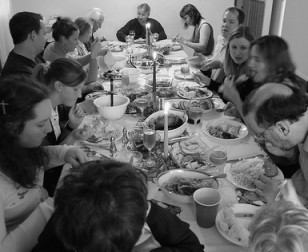 Once the entire family had overstuffed themselves on the dinner and dessert, like a plague of locusts gleaning a wheat field, the ladies of the house would quick clear the table and begin doing the dishes while the men would disassemble the banquet site. Before you knew it, everything was back to the way it was at the start of the day. The one big difference was that most of the guys, especially my Grandpa, had dozed off to sleep on sofas, beds and chairs throughout the house. Whether it was the tryptophan in the turkey or those pre-dinner shots and beers that did it, the need to nap was almost narcoleptic in nature.

Once everyone rose from their after-dinner nap, the family began participating in some of their favorite activities. My mother and my aunts would gather in my Aunt Peg’s upstairs kitchen and spend hours just “gabbing” and drinking pot after pot of coffee. The kids would retreat to their previous play areas, and the men would usually gather around the first floor kitchen table to play cards, usually euchre, and usually with shots and beers. A calm descended upon the home and would only occasionally be interrupted by my dad and uncles arguing about their card game.

By 7 that evening, everyone’s stomach started rumbling and before you could say “I’m hungry Mom,” leftovers were being pulled out of the fridge, the bird was being sliced, and fresh turkey sandwiches were being created for everyone. Leftover stuffing was added to the creations by some, and a glass of milk, a can of beer or a fresh cup of coffee would top off the evening treat. Since there were always pie left over, a piece of pumpkin pie would complete the event.

Before everyone would begin feeling that second hit of tryptophan, moms and dads began bundling up their brood and doling out their departing Thanksgiving blessings and goodbye kisses. Soon, my brother and I would be crawling into the backseat of our car, stuffed, played out and ready for bed. And so ended another wonderful holiday celebration and now the best was yet to come…….Christtmas!

I often think of how different Duquesne and the entire world are today versus during my childhood. Social problems abound and neglect and abuse run rampant.  I constantly read about the “cycle of abuse” that perpetuates the violence that exists in too many families. It makes me feel good as a father, and now as a grandfather, that because of the stong moral fiber that I developed because of my upbringing, to include all the Duquesne community, my children and I continue a cycle of love. Traditions continue to run deep throughout my family and this Thanksgiving, as those before, we’ll be starting the day as usual with that special breakfast as we tune into that wonderful parade in New York City. Remember to keep the cycle of love going!

This year, as in years past, I am most thankful for my loving family. I am especially thankful for my first grandchild, born on July 18th, and as healthy and handsome as ever. Happy Thanksgiving Jackson! Pap Pap loves you!

In closing, enjoy the cartoon below that was published on Page 1 of the Duquesne Times in November, 1958

This entry was posted in Christmas Memories, Life in General, My Hunky Family. Bookmark the permalink.

4 Responses to A Warm and Fuzzy Happy Hunky Holiday