My Most Unforgettable Character

On Monday of this week, I welcomed my first grandson into the world. I will never forget the exact moment when I laid eyes on his little face. I’m sure that it will be forever etched in my memory. I am also certain that each one of us has a litany of events in our lives that are indelibly engraved on our minds.

In one of life’s many “twist of fate moments,” as I was celebrating in the birth of Jackson this week, I received some sobering news. A very dear friend and an extraordinary woman, Nessy Marks, died early Wednesday morning at her home in Memphis, Tennessee. Meeting Nessy for the very first time back in 1994 provided me with one of those “indelible moments.” Once anyone met Nessy, they were most likely never going to forget the experience.

Nessy and my friendship with her and her family have nothing to do with living in Duquesne. It has nothing to do with being a hunky. It does however, have much to do with why I am writing this blog. Aside from the thrill of reconnecting with old friends, I also write so that we all can remember to not forget Duquesne.

Nessy too, had a personal mission to make sure people did not forget. On Thursday, July 21st, Mike Argento from the York Daily Record (York, PA) published a very heartfelt article about Nessy and her personal goal: 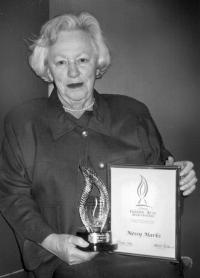 Marks made a promise to tell her story. She kept it.

Nessy Marks told the story of her life thousands of times. She would speak to anyone she could. Some days, the former York woman, who died Wednesday, would tell the story two or three times to school children.

She would speak to church groups, at synagogues, at community centers. Anywhere.

And she had to tell it.

She made a promise. It was a long time ago, but a promise is a promise.

And she had to keep it.

She had no choice.

She told this story:

She was born in Lithuania, Memel, to be exact, on the Baltic Sea. Memel was derived from the Couronian-Latvian language; it means mute, silent. She had pleasant memories of growing up, going to the beach, watching movies, camping. She had five brothers — Josef, the brilliant one; Lazar, the ladies man; Gerard, who loved to sing; Bernard, studious; and Leo, the jokester.

When she was 14, in March 1939, the Nazis invaded Lithuania. Her family fled inland to Kaunas, the capital city. As Hitler’s army poised to take over the entire country, her family arranged for visas to flee, to cross Russia to Japan and take a steamer to Canada.

They never had a chance to leave. The day before they planned to leave, the Nazis took over.

And then, the horror began.

Armies of Lithuanian thugs — enlisted by the Nazis — rounded up Jews and herded them out of their towns and villages to the killing fields in the country. There, the thugs slaughtered thousands. Women and children were clubbed to death. Men had their throats slashed. They burned people alive.

She was sent to a labor camp. She escaped and hid with a Catholic family for a while. Eventually, she went to work in an orphanage in Vilnius in the southeast corner of the country. She felt kinship with the orphans. For all she knew, her parents were dead.

At night, Nazi soldiers would visit the orphanage and search for Jewish children. When they found them, they took them to a garbage dump at the edge of town and buried them alive. The orphanage administrator found out that she had gotten the job using false papers. He asked her, “Are you Jewish?”

She couldn’t deny it.

“Yes, I am.” The administrator said he should hand her over to the Nazis. Instead, he helped her escape. She hid in a German farm town, working on a farm for the rest of the war.

After the war, she learned her parents had survived. But two of her brothers — and about 200 members of her extended family, uncles, aunts, cousins and so on — didn’t.

Nessy came to America, settling in Nashville. She married and raised a family in Memphis. She lived in York with her daughter for about eight years in the 1990s and 2000s before moving with her back to Memphis, where she died early Wednesday morning at 87 1/2.

In 1999, she and her daughters returned to Lithuania. She was prepared to make peace, but couldn’t. When she saw Lithuanians around her age, she’d wonder, “Did they kill my grandparents? Did they kill my brothers?”

For years, she couldn’t sleep, her slumber interrupted by visions of the outer limits of man’s cruelty.

So she baked. She’d stay up all night and bake. She gave most of her cakes and cookies away. She had to watch her blood sugar.

Toward the end of her life, her daughter Barbara Marks said, she started having trouble with her short-term memory. As that went, it seemed to intensify the memories of her youth, of the horrors she witnessed.

There were nights where Barbara would sit up with her mother, wrap her in a blanket and hold her while she slept.

She had four friends when the Nazis came. They knew this was not going to end well. They made a pact that whoever survived must tell the tale, must make sure the world doesn’t forget them.

Nessy was the only survivor.

“She kept her promise,” her daughter said. “She always paid a heavy price for it. But she felt it was her duty, an honor and promise to be kept.”

When my oldest daughter Megan was in 8th Grade, her history class was studying World War II and the Holocaust. As we were sitting at dinner one evening, she was relating what she had learned that day about the victims of the Holocaust and how the atrocities were not isolated to just Jewish people, but to other religions, races and ethnicities as well. I told her about Nessy and how she described her experiences when she was a young girl in Lithuania. One thing lead to another and I soon offered to contact Nessy to see if she would consider speaking to Megan’s class about the Holocaust.

As the article above indicates, Nessy jumped at the chance, and soon we had made arrangements for Nessy to visit us in Hagerstown, MD and spend a few days. Her stay included a visit to Megan’s school where she was to speak to her history class. When word got out about Nessy’s visit, the other teachers asked if they too could attend and listen to Nessy speak. What was supposed to be a 40 minute event developed into one that lasted for the remaining 3 hours of the school day. Classes from every grade level filtered in and out of the auditorium throughout that time. After school was dismissed, the teachers asked Nessy to stay even longer so they could hear more. Nessy agreed and spoke for an additional hour to just the teachers. Needless to say, by the time she was finished, she was very exhausted.

When we all arrived back at my home that day, Megan was still full of questions for Nessy. Patiently, she sat and answered each question Megan asked. She produced the “false papers” that facilitated her escape during the Holocaust and showed them to Megan. Actually touching a piece of history such as that what a profound experience for Megan as well as myself.

Before dinner that evening, I suggested that Megan play the piano for Nessy. After much prodding from us, Megan agreed to play. I asked Nessy if she played an instrument. Almost immediately, her eyes filled with tears as she related yet another story to us about her experiences as a young girl. She spoke about a very good friend, also a young girl, who lived near her in Memel, Lithuania. Both she and Nessy attended a Music Conservatory in a nearby town and were very good students. When the Nazi’s invaded Lithuania, her friend became an immediate victim of the violence. Nessy recalled how her young friend was repeatedly raped by the invading soldiers, and as a final act of horror, was marched through the streets of her town impaled on the end of bayonets carried by two of the soldiers. Since that time, Nessy never played again. This made me even more amazed at the strength of this brave woman. I was blessed to have her as a friend. She truly was an inspiration.

Nessy, rest in the eternal peace that you so richly deserve.

1 Response to My Most Unforgettable Character