Even through Duquesne is just about 11 miles from downtown Pittsburgh, to most of us when we were growing up, it might as well have been on the other side of the moon. The “Center of the Universe” for most of us, was Duquesne, and entertainment activities rarely went beyond a five mile radius from our home.

By today’s standards, people would have considered our sources of entertainment very

limited within that five mile circle. To us however, we had EVERYTHING we could have ever wanted. Although I know that there were several movie theatres in Duquesne at one time, when I was growing up, the Plaza on First Street was the “only show in town.” I have to be honest and admit that I don’t remember much about the Plaza except seeing it boarded up when I happened to be on First St. near Woody’s catching the bus or with Mom at Karen’s Shoe Store. I researched issues of the Duquesne Times to try to find any information about when the theater closed, but was unsuccessful. What I did discover is that the ad for what was playing at the Plaza ran consistently each week until the week of May 23, 1957. After that date, I was unable to find another Plaza ad. I would have been five years old when the theater closed, explaining why I don’t have strong memories about the theater.

While searching for the information about the Plaza, I discovered information about another source of entertainment in the Duquesne area, Woodland Drive-In Theater. I found an ad for Woodland which had a headline “Now Open.” It was in the issue that run on Thursday, July 7, 1955. I’m posting the ad for you to enjoy. I wonder if the opening of Woodland had anything to do with the demise of the Plaza two years later?? I’m sure it had an impact.

I remember going to the drive-in with my parents. We usually went to Woodland, but driving to White Oak and the Rainbow Drive-in or to North Versailles to the Greater Pittsburgh Drive-In was an occasional treat. Whichever theater we went to, my brother and I, along with most other young children there would be wearing pj’s. There was a small playground at the base of the screen that was equipped with the standard swings, slides, monkey bars, etc. You would see dozens of kids wearing themselves out just before the movie began.

Just around the time that dusk was about to turn into evening, you could see the faint

glimmers of lightening bugs that signaled the approach of nightfall and the beginning of the show. Moms would bribe their kids off of the playground with a promise to buy them candy or popcorn at the concession stand before the movie started. After a mad dash to the concession stand, we usually made it back to our car before the cartoons began. Compared to today’s surround sound, 3D, Imax theaters, the Woodland Drive-In paled by comparison. Yet somehow, as we all were shushed by our parents, the world opened up to wonder as the screen lit up and the sound of the Looney Tune’s theme song squeaking out of that tiny speaker that hung on the car’s window.

The theaters I remember more than any other were The Memorial, The Victor and the Liberty in McKeesport. Perhaps it was due to the fact that I was always sitting in a dark theater, but I don’t recall many details of the Victor or the Liberty other than the fact that I remember them as being smaller than The Memorial. I recall that The Memorial seemed to be larger and grander than the other two. I seem to remember décor similar to the Warner in downtown Pittsburgh.

Whenever we went to McKeesport for a movie, we’d take the bus. It would let us off in

front of The Famous and I would tug at the end of Mom’s arm and drag her the whole way to the movies. Normally, there would be a line in front of the only ticket booth, and one by one, moms and kids would make their way to the window, plunk down their $2.00 and dash into the theater to get the “best seats!” A quick stop at the “peacorn and popnut stand” as my Aunt Mary called it was always in order before claiming our seats. To buy a box of popcorn, a box of candy and a drink may have cost 75¢ or $1 when I went in the late 50’s. Of course, one could have fed a family for a week for what those same items would cost today!!

I was always amazed at the huge red velvet curtains that covered the movie screen. I remember how dramatic it felt as they were opened as the movie began. It was like Charlton Heston raising his staff and parting the Red Sea in the movie “The Ten Commandments.” In perfect harmony, as the curtains opened, the lights would dim, the audience would “oooh and ahhh” and the screen would light up with the feature presentation. Unlike the Woodland Drive-in, the sound system was a bit more sophisticated and was normally loud enough to drown out all of the popcorn munching that was going on around you.

I don’t remember which specific movies I saw at The Memorial, but I do recall that they were usually in the “Hollywood Blockbuster” genre. When I was old enough to take the bus to McKeesport by myself (in my mother’s eyes), I’d get to the movies more often but my

choice was a bit less “blockbuster” and more “trendy.” I knew that my mom would never have sat through movies like “The Three Stooges in Orbit,” “Tales of Terror,” or “Mouse Into Space” starring Tom and Jerry, so I was on my own. In 1962, a musical came out that I wanted to see. It was “Gypsy” starring Natalie Wood and I thought I could sneak the fact that it was a movie about a stripper pass my mother without her realizing it. Let’s just say that I didn’t and she did! I think she wanted to take me to Holy Name to have me re-baptized for even suggesting it! 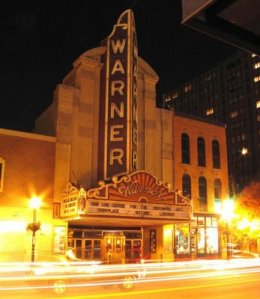 On very special occasions, I would be treated to a movie and a trip to Pittsburgh by my two cousins Bobbie and Joanne Carr. Obviously, the trip to Pittsburgh was well beyond the five mile comfort zone around Duquesne that we were used to but was well worth it! I remember three specific movies they took me to. They were all shown at the Warner in downtown Pittsburgh and were definitely “blockbusters!” The first was “Ben-Hur “ in 1959, the second was 1960’s “Spartacus” and finally, 1961’s “King of Kings.”  You know, it wasn’t until now that I realized that there was a trend in their movie choices aside from a religious theme. I need to check with them to see if they used me as an excuse to see movies featuring bare chested gladiators in prehistoric diapers! Hmmmm. I wonder??

This entry was posted in Movies, Music, Radio and TV, Stores and Businesses. Bookmark the permalink.