True Confessions of a Duquesne Boy

My wife Judy and I recently received some news that put us over the top with happiness! We are about to become grandparents for the very first time! My oldest daughter, Megan, is due at the end of July and we couldn’t be happier! We also found out about 2 weeks ago, that our grandchild in the making, was going to be a boy!!! His name will be Jackson (at least for the moment) and we are thrilled, and are as anxious for his arrival as the parents themselves!

probably tell Jackson stories about Judy and me. When Judy was growing up, I am told that she was a joy to her parents, the ideal youngest child! I’m sure Megan will cite countless examples to Jackson of how his grandmother always helped around the house, listened to her parents and did so well in school. He could never have a better example, behavior or person to aspire to.

I get the sneaking feeling that I may not serve as the same type of example. In what I hope is a very loving and sentimental way, I might be what I call the “Glamour Don’t” of behavior. I was never a bad kid. I would say that I was more of a “free spirit” type of child, always pushing the boundaries a bit. I never got into really “bad” trouble, but I always managed to do something that would make my mom and dad shake their heads either in disbelief or frustration.

As a grandfather, since I will probably become the subject of family folklore, I thought it best to come clean about a few things. I look at this as a soul cleansing of sorts. Things that I may not have admitted to doing to my parents, but things I’m sure I was always suspected of. Here goes…………

The truth of the matter is that in contrast to the things that kids have to keep them occupied today, as a boy growing up in Duquesne, we were more dependent on seeking out our own entertainment. TV was reserved for evening viewing, and then, perhaps only for an hour or so. I do remember that Mom allowed me to watch Looney Tunes on WJAC TV Channel 6, out of Johnston, Pa. before dinner each day, but that was about it.

As a result of having to find my own adventures, I found myself in difficult situations at times. For example, there was the time that my brother Steve, my cousin Paula Goldman and I were waiting for my dad to drive us home after school at Holy Name. Dad always parked his car in front of his service station on S. 1st Street. We would patiently wait for him to break away from whatever car he was repairing to give us a ride up hill to Thomas Street. When I was in 1st or 2nd grade, my dad was driving a Willy’s Jeep. It had to be one that had been salvaged from some military stint somewhere. It was olive drab green and about as stripped down as you could get. It must have been a 1946 or 47 model. It had this small round pedal that he would press to start the Jeep and I always thought it was so interesting. So, as my older brother, my cousin Paula and I waited patiently for Dad, I decided to press the starter. To me it seemed like a perfectly fine thing to do, especially  since I had never me told NOT to do it. I quickly learned the basics of starters and engaged transmissions when I pushed that little bugger. I managed to ram the front end of the Jeep directly into my dad’s garage as the car lunged forward. Fortunately, no one was hurt, not even the Jeep or the garage. I almost got away with it except for the fact that my dad saw the whole thing and Paula was screaming! Imagine, having your first auto accident at age 6!

Which brings me to my next transgression. As I freely admitted in an earlier post, I was 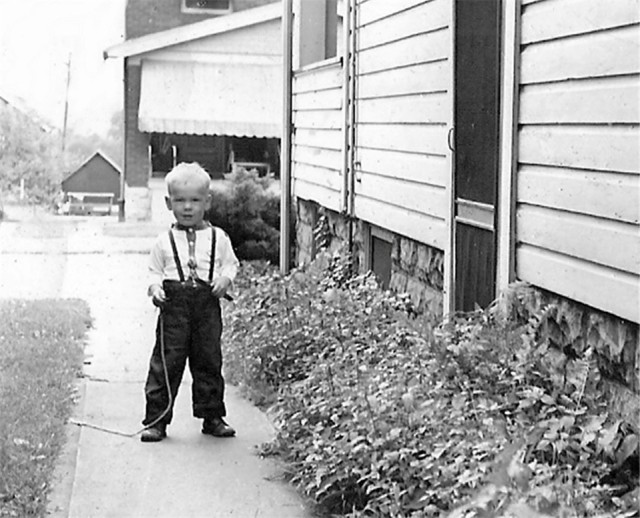 my mom’s worse nightmare since I was a picky eater. That pickiness led to my running away from home when I was about 4 years old. I recall that the whole incident was caused by my refusal to eat something that my mom was fixing for dinner. I was playing on the sidewalk in front of our driveway, and it was a Friday afternoon. Dad was still at the garage and I was trying to build a little fort for my plastic army men using  some stones I had found. Mom came out and told me to come inside and clean-up for dinner. I asked what we were having, and she announced that we were having pea soup and cheese sandwiches. I immediately went into my “picky panic mode” and began to protest (aka – cry) about having to even taste green gross soup. Of course, I had never tried it, but I made the quick decision that I was going to hate it. Rather than face the HORROR of have to consume a green colored liquid, my 4 year old brain told me it would be best if I just ran away and eliminate the need to face the food.

Without any provisions, I trotted my little butt up St. Joseph’s Cemetery hill. It made perfect sense to me. I had no fear of cemeteries, so I just darted in between the gravestones and found my way to what I thought would be the perfect hiding place. NOW Mom would be sorry she made that soup! I parked myself in the bushes that surrounded the concrete statue of the Sacred Heart near the Mifflin Street gate and the Ground Keeper’s garage. I can’t remember how long I sat there before I first began hearing people calling my name. My dad told me in later years, that my mom panicked immediately, and recruited all of the neighbors to look for me within minutes of my “escape.” I was bound and determined not to be found, so I just sat quietly in the bushes while familiar voices called out my name. I heard Anna Yasko, my Aunt Mary and Uncle Lou, Mrs. Snyder and Mrs. Gregory. I was in the clear until the neighbor who would become my nemesis in later years added the three magic words that lured me out of the bushes. I heard Rudy Gregory call out, “Jimmy!  I HAVE COOKIES!!”  As soon as I heard that, I was out of the bushes in a flash. Seriously, when it comes to pea soup vs. cookies, you KNOW who won!!  Imagine my disappointment when the hand that I reached out to grab the cookies with was latched onto by “the pea soup maker!!!” I never had to worry about having to eat pea soup that night, for I was sent to bed with supper. However, in Mom’s most caring voice, she told me the next day that she had saved the soup for me to have that night while everyone else had hamburgers. Even water boarding is no match for a Mom’s revenge!

As I wrote in an earlier post, by Mom passed away while I was still in grade school. I was 12 and my brother was 15 when it occurred. My brother and I became fairly self-sufficient at that point, and were able to take care of ourselves from the time we came home from school until my dad came home from work. It was only a two or three hour period, so homework, dinner prep and some “outside” time usually filled up those hours. As long as my older brother was home, I wasn’t too mischievous. It was only when he wasn’t home that I became a bit more adventurous. For instance:

Now, I‘m sure that you’re wondering why I haven’t turned into some serial psychopath at this point. I chalk all of my adventures up to the fact that cable TV had not yet been invented! I will leave you with one last “adventure” which involved by Nemesis neighbor, Rudy Gregory:

As a teen, I was always super anxious to get my driver’s license. Of course, I began yearning for it when I was 13 years old, knowing full well that it would be a 3 year wait before I was old enough. By the time I was 15 years old, my obsession with driving got the better of me one morning. My father was away for a day of hunting with my uncles and my brother was off to some friend’s house. My dad had left the car parked in the garage for my brother to use in the event we needed to go somewhere. It was a nice clear day, and to me, the perfect day to go for a short spin in the cemetery. Mind you, I had never been behind the wheel before except for the time I crashed the Jeep into my dad’s business.

As big as you please, I grabbed the car keys and marched out to the garage to indulge my 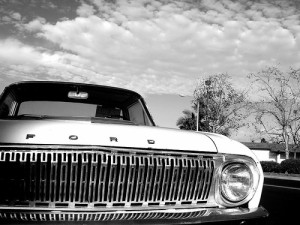 driving fantasy. I must say, I was very adept at backing the car down the narrow driveway between our house and the neighbor’s. I carefully pulled out onto Thomas Street and proceeded to drive up the St. Joe’s Cemetery hill completely confident. All went well until I had to maneuver on the very narrow roads in the cemetery itself. As I rounded one turn, I “clipped” a headstone. I panicked, but finished the turn and stopped to check for damage. Fortunately, the headstone was one of the very old ones and wasn’t damaged in any way. Unfortunately, the front passenger side fender of my dad’s car wasn’t as lucky. It was visibly “crunched.” I didn’t know how I was ever going to explain this to my dad, so I decided that I never would have to, after all, how could it have been me? I didn’t have a driver’s license! I was convinced that I would be forever haunted by the ghost of the poor soul whose tombstone I had hit, but that was minor when compared to dealing with my dad’s wrath!

Very carefully, I drove back home and although very shaken, I managed to return the car to the garage, parking it as if had never been moved. By this time, I had the entire explanation scenario worked out in my mind. Dad parked on the right hand side of the garage, so the damaged fender wasn’t visible when you entered the garage. By the time he discovered it, I might be able to raise the explanation that it happened in his business parking lot while he was at work!! Good thinking! Right?? Unfortunately, my plan never worked. Yes, he did drive off to work the next morning without noticing it, and yes, he did ask me if I knew anything about the damaged fender when he came home that evening. This was my cue to start my explanation, BUT, I was cut short when Dad informed me that my arch-Nemesis, Rudy Gregory, had seen me taking my little joy ride the day before!  BUSTED!!! Believe me, I paid the consequences.

OK, there, I’ve fessed up to all my mis-adventures. I’ve wiped the slate clean. Rudy Gregory, I no longer consider you my Nemesis, but rather view you as my conscience. I am ready to face my little grandson with my head held high and with the ability to confidently say… “Thank God you have cable!!!”

This entry was posted in Life in General, Parents, Playing and Games. Bookmark the permalink.

3 Responses to True Confessions of a Duquesne Boy