After this past weekend’s snowfall, it made me smile to see a few parents and children making the best of the situation and trying their hand at sledding with their kids. The Eastern Shore doesn’t offer much in the way of slopes to sled on, so if I do see them attempting to sled it is usually on some highway embankment. Kinda sad if you ask me.

We never had a problem finding a place to sled in Duquesne. Hunkies are a resourceful bunch. I grew up at the base of St. Joseph’s Cemetery which is “technically” in West Mifflin Borough (what is a Borough anyway?) Nonetheless, I always thought of it as Duquesne since it bordered Mifflin St. One side of the street was Duquesne and the other side was West Mifflin, so it was close.

I bring up the cemetery for the fact that it was one of the best local places to sled.  We would wait with such anticipation hoping that the snow would be the good sledding snow and would ice-up nicely. There was a stretch of straight road that ran directly from the end of Thomas Street all the way to the top of the cemetery, nearly reaching homes on Crawford Ave (aka Pennsylvania in West Mifflin.) Back then, it

seemed so-o-o-o long that they could have held the Olympic Luge event there. That is if we even knew what the luge was back then. This stretch of private road provided the ideal venue for sledding; nice and wide, a great incline, no traffic to speak of, and tons of snow. There were some negatives that we all were aware of however. Namely; drainage grates at a few spots in the middle of the road, a chain link fence and gate at the end of the slope at Thomas Street and then the fact that it emptied directly onto Thomas Street. These hazards and obstacles paled and became insignificant when compared to the thrill of the sport!

Whenever it snowed, we always knew when it was time to hit the slopes with our trusty 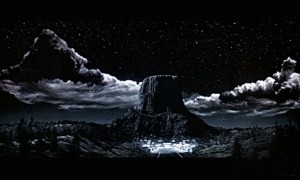 Flexible Flyers. It was as if there was a mystical calling of the troops to assemble on the hill. It was not much unlike the Steven Spielberg movie “Close Encounters of the Third Kind” in which people were “drawn” toward some mountain for unknown reasons. Yeah, that was us! All of the gang would trudge up the hill to the top of St. Joe’s Cemetery pulling their sleds behind. The attached ropes were kinda stiff from the snow and freezing temperatures. They were usually pieces of Mom’s clothesline that had been adapted for the purpose of winter fun. One by one, we made our way up; Stevie Joe, Paulie, Oknats, and me.

Now, you have to understand that type of snow that had fallen determined how soon the fun began. If the snow was “heavy” with moisture, it might take a number of runs before the sleds could race down the hill without coming to a halt. If it was powdery, well that was 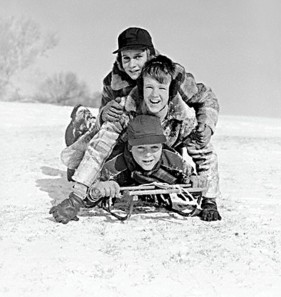 only good if there was already an icy base present. Somehow or another, we made what ever had fallen work for us. Although we each had our own sled, part of the fun would be to sled in pairs or even three at a time. The additional weight gave the sled more momentum going down the hill. There were times when we would shift as a group a bit too much on the sled and we would all go tumbling into the sideline snow!

After the completion of each run down the hill, we would head back up with sleds in tow, ready for some more thrills. There was never a complaint about it being cold. I recall bright red cheeks, snotty noses and frozen gloves being standard equipment. Thank goodness for the long sleeves on our coats, what an ideal handkerchief for us!!

We would spend hours and hours on that hill. I often wonder if it is still put to the same use. During a recent visit to the area, I once again ascended “the hill.” This time I had the benefit of a vehicle for the climb. Once I reached the top and turned toward Thomas Street, let me tell you, the thrill wasn’t gone!!

Happy New Year to my fellow Hunkies, friends and readers!!

This entry was posted in Life in General, Playing and Games, Wintertime and tagged 1950's, Duquesne, Hunkie, Pa, Sledding. Bookmark the permalink.

14 Responses to The Hunky Winter Olympics